The Sports Department here sends a fond auf wiedersehen to the 2010 winner of the Stinque Golden Vuvuzela, Paul the Octopus, who died of old age on Tuesday in Germany. Paul rocketed to global fame this summer when he correctly predicted the outcome of all of Germany’s World Cup games as well as Spain’s victory in the championship game, and of course when he later won the Golden Vuvuzela for Hottest Hottie of the World Cup with 51% of Stinque readers’ votes. 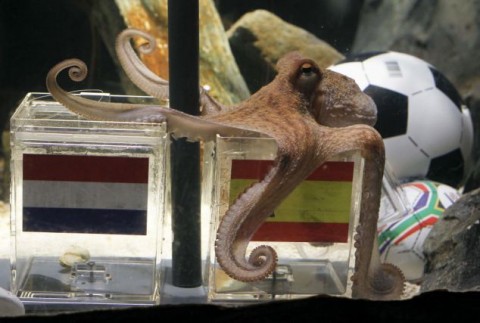 Don’t forget thath Paul was also a symbol of everything that is wrong with the Western world according to Mahmoud Ahmadinejad.

On an unrelated note, I’ll be on a factfinding tour of Israel for the next two weeks, checking out whether RML’s posts of Women of the IDF are representative or not. I’ll report when I get back.

@Dodgerblue: OOh, Israeli Solders! Get some pictures. Do they ever exercise shirtless in the heat?

@Dodgerblue: Wow, you’ve traveled a lot this year! Has it all been work or fun or both?

Meg Whitman remembers 30 years ago when “anything was possible” in California. Thirty years ago, Jerry Brown was governor.

@¡Andrew!: All work, but Israel is a vacation.

@Dodgerblue: My boss just spent three weeks there–we both enjoyed his time off.

@Dodgerblue: Didja catch the recent Simpsons where they vacationed in Isreal? Better watch out for that Messiah Complex.

Is baked still on Theeeee Ey-land, or did she head back there?

@¡Andrew!: I did see it. I liked how they mocked all of the People of the Book.

TJ/ Congratulations, the US is down to Number 22 on Transparency International’s ratings of the influence of corruption in nations of the world. Be sure to see how the puppet governments we have put in place in Iraq and Afghanistan are doing as well. As Christine O’Donnell would say, they’re just like us. Or maybe we are becoming just like them instead.

@SanFranLefty: No mockery from me. I hope she has a full and speedy recovery and then gets crushed in the election.

Jimmy Carter just spotted by yours truly at the Ferry Building, signing his new book at the bookstore.

@SanFranLefty: He looked spry, I hope?

@Dodgerblue: There was a ring of secret service agents and SFPD standing around him, and he was sitting at a table in the bookstore signing books and shaking hands, so it was a little hard to tell from the Peet’s Coffee 15 yards away, but as far as I could see he looked fit and alert.

@SanFranLefty: I’ve met with Tim Kraft, Carter’s campaign manager in 1976, but have not met Carter himself yet.

@Dodgerblue: So your are saying there will definitely be shirtless Israelis involved, then. It being a vacation and all.

@SanFranLefty: I can’t believe the name of that column/blog/whatever is “Below the Beltway.” Can I get a rimshot?

The not MSNBC ad is telling me that Ben Quayle is the solution to our unemployment problems. Seriously.

Ben Quayle will give me a jerb? Really?

@blogenfreude:
Electing Ben Quayle is a solution to Ben Quayle’s unemployment problems not anyone else.

Kahleefornication TJ: eMeg refuses to give up negative ads though Moonbeam says he will, and Guvernator gives his reign a 10 and still refuses to say who he’s voting for.

So I had my Accounting mid-term today, and I survived, barely. The test took over two and a half hours, and the atmosphere in the classroom was gratuitously intense–by the second hour people were screaming and throwing up. Afterwards, I walked in the door to my house and the first words outta my mouth were “BOOZE NOW.”

Question for Stinque Legal: Is it possible to sue your professor for inflicting emotional distress?

@SanFranLefty: That’s kind of standard, isn’t it? The leader magnanimously disowns attack ads? Moonbeam’s something like 8 points up, so he can afford to be gracious.

@¡Andrew!:
hello darling..i be jommin on da island. i haven’t been here for so long..miss the chatter and miss you all. i’ve been writing a book. (i’ll stop now, tell me when you’re finished laughing)

just coming off a hell ride up north. my grandson was heaven, (and JNOV!!!) then dad got very ill and i ran up to new york. as soon as his surgery was over, i ended up in the ER with a sciatica attack i wouldn’t wish on RB’s girlfriend. i had made plans to have dinner that night with bloggy, when he called i was hysterical. screaming and crying. he should have waited for the IV morphine to kick in. this doogie howser in the ER attempted to give me MOTRIN!!! nice comic relief–natch, 5 minutes later, i had morphine.
congrats on your midterm!

hey dodger, the soldiers are more than willing to pose for your pics–can’t wait to see them. dont miss the childrens memorial at the holocaust museum–you’ll never be the same. sorry tommie, i didn’t see any shirtless ones.

i took a news break, though i did catch our fave senator who wears diapers last night. RB said something funny…we had a total blackout for two days over the weekend. drove around looking for coffee and we see all the electrical workers just sitting. sitting on a wall and doing nothing. wtf i said. he said it’s like the house and senate…they’re waiting for someone with a brain to show up.

FUN: saw some attack ads aimed at dems made BY dems. they’re eating their own now.

wait, i’m wrong tommie…YES, they ARE shirtless on the beach!!! but never big scary gunless.

where the hell is our scrabble game? we may have lost out on guinness now! i know, i’m the one who spaced with all my drama…
so, LET’S GO !! you know our game is my only anchor.

@baked: I’ll see if I can dig it out of the archives. Dodger will be playing from the Promised Land.

@baked: Motrin???? That’s just insulting. Is he still singing soprano from when you grabbed his balls and twisted?

Hey Drama Mama, we missed you! I commend your restraint at the hospital. I’d have let that SOB know that I’ll settle for nothing less than liquid morphine–“JUST GIVE ME THE BOTTLE. Oh and my back hurts, too.”

@baked: What’s your book about?

@Mistress Cynica:
can you even imagine? then he tried to give me percocet. uh uh. when i asked for a real doctor he got with the program. btw, i got TWO shots. i’m a pro.

@¡Andrew!:
you really have to ask? “write what you know” they say.
mining my own life is as tragic and comic as it gets.

@¡Andrew!: As I understand it our own dear Baked’s book is about achieving serenity through pharmaceuticals.

@baked: This is an outrage. There is a lesson here for us all.

@baked: You and Cynica are at the top of my list of people whose memoirs I would pay cash money to read.

Names will be changed to protect the innocent, I presume?

@Prommie: Innocent? In a book by Baked?