This is why Bill Clinton was, is, and will forever remain America’s most awesome president:

In 1999 or 2000, after the failed attempt to kill Osama bin Laden with some 80 cruise missiles launched into the al Qaeda camp in Khost, Afghanistan, a frustrated President Bill Clinton thought that somehow the United States could “scare the shit out of al Qaeda if suddenly a bunch of black ninjas rappelled out of helicopters into the middle of their camp,” according to the 9/11 Commission. 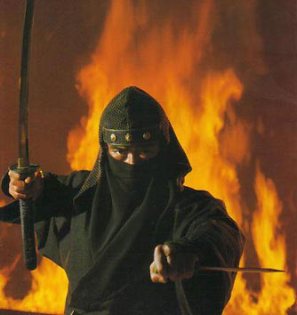 I am coming for you!

The world of sports mourns. The surviving Beatles reunite to for a tribute version of Octupus’s Garden (another “Paul is dead”-related rumor couldn’t hurt).

P.S. Sorry for being incommunicado. Life has kept me tied up and will for a while longer, but I had to pay my respects.

If you’re going to do all that intelligence gathering, mission planning and hard work to get ninjas in place to scare the shit out of OBL then you might as well kill him (the special ops equivalent of buy one get one free.)

As awesome as movies make bladed weapons out to be, the law of the blade says the man with the assault rifle usually wins.

It would be a worthy fate. A little on the Catholic side, but that works in Spain.

@ManchuCandidate: “Anyone can use a gun. A real man uses a knife.” – Anon.

“If they bring a knife to a fight, we’ll bring a gun.” Tha Black Eagle on the campaign trail. In actuality, if they bring blade, the administration brought flowers. Still, I’m voting straight Dem today.

@Walking Still: “It wasn’t John, Paul, George and Larry after all.”

J. Seinfeld to L. David on why J. Alexander had to be in the final, final episode on CYE.

You mean voting Dem “Across The Board”. Let’s not privilege “straightness” as a normative value.

This has been a helpful reminder from your Stinque Thoughtcrime Enforcement Authority.

The TEA. Where our motto is “Everybody’s guilty, and now that I brought it up, you are too.”

@redmanlaw: Anyone can use a gun. A real man uses his bare hands.

Yes, yes, it’s all about those massive paws for you, isn’t it?