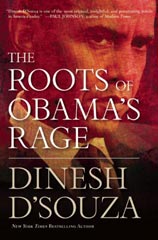 Title: “The Roots of Obama’s Rage”

Blurb: “The Roots of Obama’s Rage reveals Obama for who he really is: a man driven by the anti-colonial ideology of his father and the first American president to actually seek to reduce America’s strength, influence, and standard of living. Controversial and compelling, The Roots of Obama’s Rage is poised to be the one book that truly defines Obama and his presidency.”

Review: “Why did Obama return the Churchill bust to the British government? Or refuse to place his hand on his heart during the National Anthem… or wear the American flag lapel pin? Why did he bow to certain Second and Third World leaders while intentionally snubbing others? (England, France, and Israel come to mind). To understand this, you’ll need to remove your American glasses and don a pair of Anti-colonial glasses.”

The Roots of Obama’s Rage [Amazon]

The left thinks he’s ineffectual and too prone to compromise. The right thinks he’s Hitler/Stalin/Mao/Martha Stewart. I suspect the truth lies nowhere between.

I don’t see Obamabots screaming about freedom and “taking back OUR country.”

I see a lot of fat white angry bitters riding Rascals who harbor some resentment of tinted people screaming about freedums and “taking back ARE cuntry (sic) and hating on a slightly more equitable health insurance system in US Amurka.

But then again, I’m not surprised you’d get things wrong since wrote: “The End of Racism.”

Wait, isn’t US America by definition anti-colonial, or am I too a secret Kenyan liberation theological Mooslem just for thinking that?

@Nabisco:
Yes and Yes you are.

Why isn’t Dinesh in a padded cell?

Correction: in a straitjacket in a padded cell?

One could probably blame Raygun for dismantling much of the mental health infrastructure. At the time it was regarded as a dick move, but now it’s apparent that it was a brilliant strategy to seed the conservative movement with delusional paranoids and the like.

TJ – a rant, since we’re talking about batshit crazy right-wingers:

Schwarzenegger just signed a bill that will allow California youth in foster care to continue to get benefits and housing assistance to their 21st birthday instead of being kicked out of their foster homes and group homes on their 18th birthday. Studies have shown the longterm financial and personal benefits of letting the kids get benefits past age 18 (less incarceration, homelessness, and/or teen pregnancy; more education completed, job training). It’s not like families are kicking their kids out of the house on their 18th birthdays, but that’s what the government does to their kids.

So who would oppose a bill – which the legislature passed with bipartisan support – and makes sense from an ethical and fiscal point of view? The San Jose Merc enlightens us

Yet the change is not universally celebrated.

“What it does is just keep kids trapped in the government programs for several more years,” said Camille Giglio, director of the conservative group California Right to Life. “Rather than the government or the foster system doing a good job teaching the kids and getting them prepared, it’s just another excuse to give more money to agencies.”

“trapped in the government programs” is what Camille Giglio calls being given a chance to eat food every day and sleep under a roof.

@lynnlightfoot: Once you’re born, you’re on your own, kiddo!

@SanFranLefty: Those kids are 18 years too late to arouse Camille’s concern and compassion. That ended the second they were born. I was ranting last night to Mr Cyn about the so-called “family values” types who will ruthlessly cut programs that benefit children–education healthcare, Head Start, and the sort of post-foster-care assistance you describe. You can cite all the studies you want to show the long term benefits and savings of these investments in the future, but hey, they’ve got Teabaggers on Rascals to maintain with Social Security, Medicare, and tax cuts.

I don’t know the name of the charity who arranges it, but friends of mine in OKC (a well-to-do childless couple) have “adopted” several kids who were leaving foster care, helping them with monthly rent, household goods (the furniture and kitchen equipment I didn’t take when I moved went to furnish one girl’s apartment), and assistance with finding jobs and getting additional education/training at community college or vo-tech.

@Mistress Cynica: Plus Camille’s most likely living off wingnut welfare herself.

Camille believes in the right of everyone, rich and poor alike, to live under bridges and starve to death. ;)

Where can I get a Tea Party Coloring Book. They would make great stocking stuffers for for the right wing of the family this holiday season?

@Mistress Cynica: @lynnlightfoot:
THERE you are…spent the weekend throwing up and watching 18 episodes of the Mad Men….so rat’s mother WAS right—everybody cheats. i feel better on all counts.

@redmanlaw:
i’m up to season 2, episode 4. (is peggy gonna get jiggy with the priest????)
what was all that swooning over dan draper goin on? i find him despicable. as a matter of fact, ALL the characters are people you love to hate. i’m enjoying it immensely. even gave my up my serial killers for it last night. try “criminal minds” for working out. that was my calling i think–the Behavioral Analysis Unit of the FBI. oh well.