Everything You Know is Inoperative 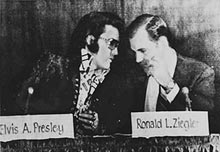 Sen. Richard Burr (N.C.) is expected to take over as senior Republican on the Senate Energy panel after Sen. Lisa Murkowski (Alaska) lost the position Tuesday.

Senate Republican Leader Mitch McConnell (Ky.) was behind the switch.

In a surprise move, Senate Republicans decided not to remove Sen. Lisa Murkowski from her top position on the Senate Energy and Natural Resources Committee Wednesday, according to several Republican senators who refused to explain their decision.

Actually, they voted to remove Lisa Murkwski, but discovered their error too late.

Good thing they have name tags in the picture. One would want to throw one’s unmentionables at the wrong one.

Ron Ziegler – the only Presidential Press Secretary whose principal job qualification was experience as a tour guide at Disneyland.

@Walking Still: Given the White House press corps, that seems like an incredibly useful qualification.

@SanFranLefty: I have a fridge magnet with a picture of President Clinto’s cat Socks sitting atop the podium in the WH press room.

I guess Socks misses Socks too, these days.

@nojo: From being to nothingness, but I’m sure he’s somewhere smiling down on Maru.