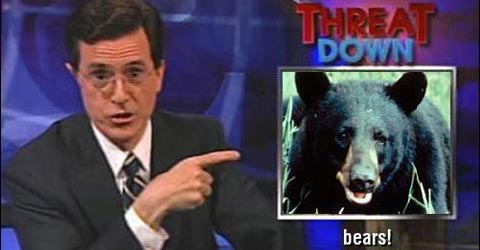 While the upcoming Rally to Restore Sanity/March To Keep Fear Alive is supposedly scaring the bejeezus out of Democrats for stealing focus next month, it seems at least one of the headliners will be slipping into DC early. Like, Friday:

One Republican source said Colbert will be testifying “in character,” the Bill O’Reilly-like muse Colbert uses for his show.

A House Judiciary Committee spokeswoman, confirming Colbert would testify, said the hearing matter was a “serious issue… this is not a TV stunt.”

Some Republicans have already expressed unhappiness with Colbert witnessing at the hearing, thinking it would make light of a serious issue.

The background is that Colbert did interview United Farm Workers President Arturo Rodriguez in July, and apparently later participated in the UFW’s Take Our Jobs program — spending a day in the fields with Zoe Lofgren, who chairs an immigration subcommittee. That he might now testify about his experience isn’t beyond imagination.

But in character? That’s not beyond imagination either, but we have a hard time buying it. Especially when the rumors are spread by Republicans, who have plenty reason to discount his appearance. Get back to us when a Demrat confirms.

nojo
5:14 pm • Wednesday • September 22, 2010
comment »
Choose Your Delusion
Everything You Know is Inoperative After Which, the Store Will Be Ceremonially Closed When a Home Depot Opens at the Edge of Town
27 Comments
nojo

Questions we get asked when we’re trying to smoke outside the coffeehouse:

Questions we also get asked when we’re desperately trying to escape back inside:

“Did you know the oil spill was a conspiracy to hide Atlantis?”

“Did you know they used antigrav weapons on the World Trade Center?”

Oh, and dude will also convert your Powerpoint to video.

for further laughs, check out prisonplanet.com and infowars.com

@nojo: It’s because you have a kind face. Along with all the hotness.

BTW. I held one in my hands yesterday. I could only stroke it. I couldn’t really make it do all the things I wanted since I was in a public place. But it sure was fine.

For any ageing hippies who may view this:

If you live in the Northern Hemisphere, today is the autumnal equinox and a Super Harvest Moon will cross the sky after almost 20 years since the last time it happened. When the Sun starts to set on the Western horizon, a full moon will rise opposite to it on the East, reflecting the light of our home star.

Being close to the horizon, the orange Moon will be gigantic thanks to a psychological effect called the Moon illusion. The sky will be illuminated by the Sun and the Moon at the same time, creating a weird 360-degree effect that is rarely seen.

@Dodgerblue: Speaking of Colbert, in case you missed it.

@mellbell: You know, the musical scale used in “Hava Nagila” is same as Dick Dale used in “Miserlu.”

Fluoride and MSG turn 5-year-old boys in to DRAG QUEENS!!!!

Also known as a “Fata Morgana”.

@Dodgerblue: “Super Harvest Moon” – is that like a deluxe edition of the Neil Young album? Love that song “Look Out for My Love”*, especially when it gets weird(er) at the end with the distant electric guitar.

*one of the most awesome songs ever

@Dodgerblue: Ollllld School version of Miserlou played on an organ by a guy with a turban.

Huh – that’s a little different from Alex Jones. He’s always been batshit crazy (definitely an OG-of-da-crazee) but hating on gheyz is not typically part of his routine. Maybe he decided that teabaggers couldn’t follow the elaborate NWO stuff he’s typically talking about.

@al2o3cr: Tha NWO/Reptillians/Illuminati are behind the Tea Baggers. He either can’t say or won’t say.

Need I add a shout out for Fucking Up?

@FlyingChainSaw: @FlyingChainSaw: Yes. Has a minor second — very distinctive sound. Ahava Rava scale in Hebrew. Also the Hungarian melodic minor or something. Dick Dale is Lebanese-American and probably heard this scale a lot as a kid.

@Dodgerblue: Well I missed the moonrise. Damn. But just came in from outside and its huge and hanging low in the sky and brilliantly bright. We don’t get both horizons as the hill rises steeply right behind the house but we get moonrise a lot.

@Benedick Arnuldsson Manpants: I’m on a college campus to give a talk to some eager young students. Caught the moonrise, but sunset was blocked by some anonymous buildings.

@Mistress Cynica: My sympathies (that you’re in OK, not that you had a spectacular view).

By the time I remembered it was the Harvest Moon Equinox the sun had already gone down over Twin Peaks and the moon was at 30 degrees over Mount Diablo, but it was looking incredibly close with a lovely purple/blue sky.

i missed the damn moon, dammit. it has been pouring here with almost constant thunderstorms for 2 days with the forecast for another week of this. no complaints! all the hurricane activity is south of us, and let it stay there, i’ll take the rain.
twilight zone moment:
we’ve had intermittent power with all this–welcome to the caribbean.
so the house has a flashlight every 10 feet..i’m afraid of the dark.
so one dark rainy night, last, this toy i bought for Bella was getting on my nerves. it sounded like bugs bunny laughing. was cute in the store for 5 seconds. so i take the toy away and put it on the window sill. it goes off by itself. must be the wind, jeeze the thing is sensitive! so i put it on top of crate. it spontaneously starts laughing at me again. ok, now i’m spooked. i take the thing into the bathroom with the hammer i keep in my night table drawer for unsuspecting heads of attackers. under the glare of flashlight, i start ripping the thing open til i find the little music thing. i pull it out and start banging it with the hammer–which barely made a dent! and it keeps laughing at me! i just stopped shaking about 20 minutes ago. it finally died, it was it or me.
glad YOU all enjoyed the moon i’ve been waiting for.

@baked: We just had a first class dawn. The toad brought along toad jr and both were sitting on the path to watch. Discussing the Democrats’ chances in Nov, I shouldn’t wonder. The dachshunds all hate those noise toys and tear them to bits to get at the noisemaker. Still, good to know the Chinese can make something that doesn’t stop working the minute you get it home from the store.

That last remark does not apply to Apple products. My iPad just left Shenzen.

@Benedick Arnuldsson Manpants: my nerves are so shot. nice for you and your first class dawn. i’m in steerage over here, i’ll take your word.
i just did something terrible. my precious ‘little’ Bella. poor Bella!
she whined a little to tell me it’s time to get up! and i have to pee mommy!! so i race downstairs with her and WHILE i’m attaching the leash at the front door, she squats and pees a flood. i didn’t notice til the flood ran over my toes. i reacted waaay too harshly. screaming and carrying on, i dragged, i mean Dragged her, by her neck, back to her crate. i heard her rustling a little bit and screamed SHUUUUT UUUUP !!!
she’s in there quaking with fear. what have i done??? will she forgive me?
will i forgive her? that rat better get his cute ass back here where i can take out my frustration where it belongs.

@baked: She’ll forgive you. Just let her out and make a fuss when you’ve calmed down. Puppy-time can be tough without the proper amount of sleep. Don’t be too hard on yourself. That’s my job.

@Benedick Arnuldsson Manpants:
i’m not calm yet. i figured out why. i am astrologically ruled by the moon. a harvest moon? where do you think “lunatic” comes from?

the rat will be home sunday night. i can’t wait! no no, not to see him…he went to my israeli dr. feelgood and is coming home with 180 10 mg. percocet for me! the man does know the way to my heart!
i’m actually shaking again and it’s more than the ativan can handle. is it too early for a martini mum? that was rhetorical. i’m going to down a couple shots then cuddle my poor baby girl. oh the look on her face! i’ll never forget it. i’ll never do that again. i’m out of control. RAAAATTT, COME HOME, YOU BASTARDDDD!!!!!

oh dear, thank god i have YOU. i am behaving like my BM ! i employed her “mothering” technique. keep small children and animals out of my way today.
I”M SO SORRY…she’s crying now. i go to her and tell her i acted like mom mom…she will understand.

@baked: She will understand. God knows I have enough incidents to reproach myself for while raising packs of dogs. Like the time our magic dachshund, only 6 months old, dropped his toy in a creek that was raging in full spring spate, the toy was whisked away, Dax put his paw in and vanished. I chased him down the creek, falling over boulders, soaked, freezing, watching him going under then coming up then being borne helplessly along towards the waterfall I knew was up ahead. Seeing him caught in a whirlpool that held him just long enough for me to reach him, grab him, and throw him ashore. You think I didn’t reproach myself for letting him anywhere near that creek? He didn’t care.

@Dodgerblue: Last night was a major/minor holy day in NotTibet, due to the full moon. But it was nothing to compare with dashain. Happy Katrik everybody!

ADD: Powderfinger is one of my all time fave NY tunes. Love that cronk he gets out of Ole Black.