Praise the Lord and Pass the Zyklon 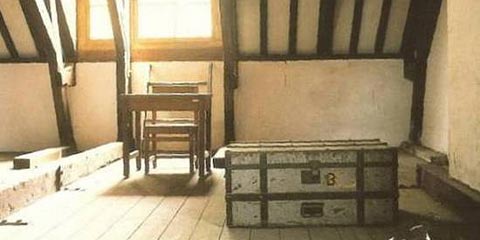 We’re not going to trawl through all those Christine O’Donnell Politically Incorrect appearances that TPM dredged up, but God bless ThinkProgress for doing the heavy lifting. Let’s join a 1998 conversation with Bill Maher and Eddie Izzard about the morality of lying, already in progress…

O’DONNELL: A lie, whether it be a lie or an exaggeration, is disrespect to whoever you’re exaggerating or lying to, because it’s not respecting reality.

MAHER: Quite the opposite, it can be respect.

IZZARD: What if someone comes to you in the middle of the Second World War and says, “do you have any Jewish people in your house?” and you do have them. That would be a lie. That would be disrespectful to Hitler.

O’DONNELL: I believe if I were in that situation, God would provide a way to do the right thing righteously. I believe that!

MAHER: God is not there. Hitler’s there and you’re there.

O’DONNELL: You never have to practice deception. God always provides a way out.

God certainly provided a way out for about six million of His children, while helpfully providing a more convenient way out for Pope Pius. And, if we’re lucky, God will take pity on America and provide us a way out of the hellhole we’re creating in His name.

This is going to be a fun cycle…

I wonder if she’s ever even heard of Kant.

@Tommmcatt Cannot Be Arsed To Think About Sharon Angle: And then there’s Karl Rove — Karl Rove! — accusing her of being homophobic. And getting roundly trashed by the teablogosphere for his insolence.

And then there’s — well, a shitload of other stuff coming out today. Most of which I’ll skip, because we’re not a catalog. But there’s at least one more out there I may not be able to resist.

The question is moot anyways – she’d be the one *in* the Nazi uniform, knee-high leather boots, riding crop and all. Half of the Faux Nation probably fapped themselves (guiltily) to sleep with that mental image last night…

@nojo: Right, Rove thought the pig fuckers would stay the fuck where the fuck they were told. Now they’re chewing on his fucking face. They weren’t supposed to do that, were they, asshole? Ha. Hahaha. Hahahahahahaha. Rove’s in his own fucking twilight zone episode. It’s great the pigfuckers will finally rip his arms off and eat them in front of him but a shame a civilization had to be condemned to an early flaming death on the way to justice.

I say this from personal experience in dealing with my mother: Moral absolutists are so much fun to toy with!

@nojo: Local Hate Radio in Albuquerque has been beating its now revealed to be establishment breast over the TeeBees. Their take: thanks assholes. Your psychos will get kilt in the general elections and the Dems will stay in power.

I don’t think this one is over until it’s over, however.

Stayed calm during election coverage last night by loading rifle ammo. Bumping up my powder load a tiny bit (1 grain) for more speed and power at the other end.

Still, I don’t think they’ll take the Senate now. But the House remains very much in play.