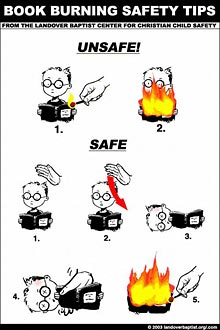 All Derek Fenton wanted was to exercise his God-given right to trash somebody else’s God. But he hadn’t planned on making himself a martyr:

The protester who burned pages from the Koran outside a planned mosque near Ground Zero has been fired from NJTransit, sources and authorities said Tuesday.

While a New Jersey “code of ethics” amuses us to no end, and we’re more than pleased to see a jerk get jerked, we’re actually mildly concerned: There’s nothing illegal about torching scripture, and the apparent principle invoked could work both ways.

But Derek’s a big boy — he can always call his local ACLU office, which we’re sure someone like him has always held in the hightest esteem.

My brain at first spoonerized this guy’s name to the point that I thought we were discussing our favorite gawker. Then I realized that if that were the case, we would also be making a much bigger deal out of it.

Right. Hmmmm…thing is, I think NJ Transit isn’t a state actor. Their site is a dotcom not dotgov. Here’s something from their site:

Created by the Public Transportation Act of 1979, NJ TRANSIT was established to “acquire, operate and contract for transportation service in the public interest.”

In 1980, NJ TRANSIT purchased Transport of New Jersey, the State’s largest private bus company at that time. Between 1981-85, the services of several other bus companies were incorporated into NJ TRANSIT Bus Operations, Inc. [emphasis added] On January 1, 1983, a second subsidiary, NJ TRANSIT Rail Operations, Inc. was launched to assume operations of commuter rail in the State after Congress ordered Consolidated Rail Corporation (Conrail) to cease its passenger operations. A third subsidiary, NJ TRANSIT Mercer, Inc., was established in 1984 when the agency assumed operation of bus service in the Trenton/Mercer County area. In 1992, following a full reorganization, all three subsidiaries were unified and operations were significantly streamlined.

As stakeholders in NJ TRANSIT, State residents are represented by a seven member Board of Directors, appointed by the Governor. Four members are from the general public and three are State officials. The agency is structured to encourage broad public participation in the formation of transit policy for the State. NJ TRANSIT’s board meets monthly at NJ TRANSIT headquarters in Newark. The Governor can override board actions by vetoing the board meeting’s minutes.

Christie Whitman privatized a lot of stuff, like the DMV, when she was governor, so I’m not sure this is a civil liberties issue. I’d love to be the ACLU volunteer who gets to tell dude that this isn’t a free speech issue.

ADD: But then again, can the fact that the gov is allowed to override the BoD make them state actors? I dunno.

@nojo: Hmmmm. When my brain isn’t fried, I need to look into the issues of states running private concerns. I guess I could start with the NJ Const….