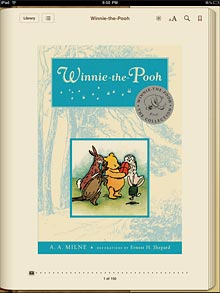 Having designed a fair amount of publications over the years —books, magazines, tabloids — we know a thing or three about fonts. Not just display fonts — someone once dared us to find a legitimate use for Comic Sans — but much more importantly, text fonts, the stuff you actually read. Especially if you’re reading at length.

It’s not a question of “readability” as such, but of — pardon the pun — character. Set a given piece in twelve different fonts, and it’ll read in twelve different voices. Some fonts resist their material. Some will make you read too fast for the purpose, or too slow. (We recently set a technogeek thriller in Times New Roman, because that was the only font that made sense for a page-turner. Newspaper fonts are designed for skimming, and that book demanded to be skimmed.)

What you’re looking for — especially if you’re setting a book — is a font that becomes “invisible” to the text, a font that lets you read without thinking about reading. It’s a craft, not a science. It takes judgment, and a good eye.

And it’s why a lot of books suck. They weren’t born bad. They were set that way.

We haven’t played with a Kindle, but the iPad Books app is a good start toward a decent e-reader — better since Apple provided a text-justification option, and better still once they provide more fonts to play with, or the option to supply our own. Trust us, Edward Gibbon does not want to be read in Verdana, but he’ll settle for Georgia right now.

On the other hand, Jonah Lehrer, writing for Wired (of course), gets it all wrong:

I do have a nagging problem with the merger of screens and sentences. My problem is that consumer technology moves in a single direction: It’s constantly making it easier for us to perceive the content…

Familiar sentences printed in Helvetica and rendered on lucid e-ink screens are read quickly and effortlessly. Meanwhile, unusual sentences with complex clauses and smudged ink tend to require more conscious effort, which leads to more activation in the [brain’s] dorsal pathway. All the extra work — the slight cognitive frisson of having to decipher the words — wakes us up.

So here’s my wish for e-readers. I’d love them to include a feature that allows us to undo their ease, to make the act of reading just a little bit more difficult. Perhaps we need to alter the fonts, or reduce the contrast, or invert the monochrome color scheme. Our eyes will need to struggle, and we’ll certainly read slower, but that’s the point: Only then will we process the text a little less unconsciously, with less reliance on the ventral pathway. We won’t just scan the words — we will contemplate their meaning.

Well, no. Or not quite. Yes, Faulkner’s rivers of sentences rendered in Helvetica would be an abomination. For that matter, Faulker rendered in Times would be way too breezy. But like we say, some fonts encourage dwelling instead of rushing — savoring, if you will — and we’re sure our tested practice of trying a dozen alternatives would yield something appropriate.

Lehrer doesn’t need a Derangement Function on his Kindle — he just needs an ample selection of voices for the books he reads. Then again, reasonable solutions to practical problems don’t get you a byline in Wired.

The Future Of Reading [Wired, via Sully]

Maybe he should stop moving his lips when he reads so it puts less strain on his head muscles.

… the slight cognitive frisson… . Well get you, Ada, for ninepence.

Pompous much? As for fonts – a conversation only slightly less popular around here than how to make a martini, hunting or buttsecks – who can read anything in Helvetica? Isn’t it meant to be looked at? Also, who can read anything written by Faulkner? Also, I like Comic Sans because it makes me smile and hum songs recorded by the Carpenters. Though I liked it better when I thought it was Cosmic Sans. The worst abomination of fontery is Courier in all its many loathsome aspects. Courier makes me want to kick puppies.

Now this Jonah Lehrer person, is it confusing itself with W Buckley?

What a fucking clown. What next? Condemnation of hyphenation rules as tyranny? WIRED always looked like its page designers’ last gig was pasting up ransom demand letters. Would this asshole even thought of calling up the copy desk at a real newspaper and testing his pathetic excuse for a thesis and get laughed at or maybe provided enough insight to craft a working thesis worthy of the name? No. Because WIRED writers are required to shave their heads, slick them up with a quart of Marvel Mystery Oil and shove them savagely and without remorse straight up their asshole before they begin any new assignment.

@Tony Blair Witch Project: His background is in neuroscience, so he knows whereof he speaks when it comes to questions of human perception. He’s typically a good read, and I’m not even sure I disagree with him here. Plus, he’s kind of hot, so, you know.

@mellbell: He looks like he’s five! And he needs to sit up straight in his photo.

When he said the following, it made sense to me:

I sometimes wonder why I’m only able to edit my own writing after it has been printed out, in 3-D form. My prose will always look so flawless on the screen, but then I read the same words on the physical page and I suddenly see all my clichés and banalities and excesses. Why is this the case? Why do I only notice my mistakes after they’re printed on dead trees? I think the same ventral/dorsal explanation applies. I’m so used to seeing my words on the screen – after all, I wrote them on the screen – that seeing them in a slightly different form provides enough tension to awake my dorsal stream, restoring a touch of awareness to the process of reading. And that’s when I get out my red pen.

It’s true for me with my own writing.

And despite all the talk of “paperless law offices” and such, I still cannot read legal cases on a computer screen. I can only do it for a little while and with minimal usefulness. I still have to print out the cases, the treatises, etc. (double-sided naturally, and often set at two pages of text per side so I have four pages of text on one page of paper) and pile them in a stack and go through everything with a highlighter and post it pads. Partly I think it’s the permanency of having them around – I might go through a case once, but then when I’m going back to add some language into a brief I’ll re-discover a paragraph elsewhere on the case that on second glance is useful. That won’t necessarily happen if I have them as PDFs on my computer.

It’s not just the fonts, it’s the paper. I will never have a kindle, even if you can change the fonts. One of my favorite books recently was a 1930s print edition of Steinbeck’s Tortilla Flats. I have no idea the name of the font but it was perfect. The pages were a fairly heavy stock with an unfinished feel. The beautiful wood-block prints are a gift.

Holding that book and turning the pages was like being snuggled in a comfy blanket.

Even modern books which lack the tactility of pre 1960s papers are far superior to any electronic book reading machine.

@karen marie:
I agree about the tactile nature of books.
and not just reading but also art books. more fun than a screen.
but I still what an iPad.