Stinque
Home Latest Comments Log in
If it smells, we’re on it.
Stinque
Mastodon: @stinque@mas.to
Dispatches From Hell, Today In Suck

Fire on the Mountain: Another Day in Corporate America

Yesterday as families were sitting down to dinner in San Bruno, California, a 30-inch wide, 60 year old natural gas transmission pipeline owned by Pacific Gas & Electric exploded, creating an apocalyptic inferno of flames shooting hundreds of feet in the air, something that fire department officials said they had never before seen, and the fire was not extinguished until this morning.

Aircraft normally used to fight forest fires had to be called in to drop water and chemicals over the suburban neighborhood.  The explosion created a 30 foot deep crater, and the fires destroyed at least 30 homes, injured more than 50 people (many of them critically burned), killed at least four people, and left more than a dozen family pets reported to the Humane Society as missing.  Hundreds of people were evacuated, including from a nursing home.

Officials say that the death toll will undoubtedly go up as the rescue crews survey the area with cadaver dogs.  The fireball and smoke plume was so high in the sky that your San Francisco correspondent was able to see the smoke plume from twelve miles to the north.  The morning after images are akin to those of Dresden in the ’40s. 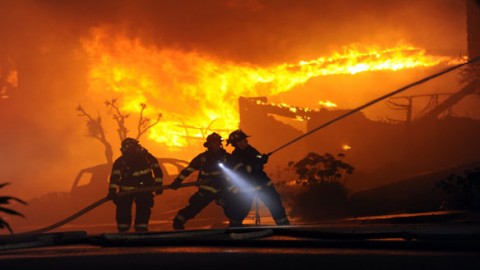 This morning, with the front pages of all local newspapers screaming at me in 96-point headlines and photos such as this one, I exited my usual subway station to discover several blocks of a Financial District street shut down with numerous Police, Fire and EMS, and PG&E trucks parked along the streets with all emergency lights flashing.  Turns out that two manhole covers had exploded 15 minutes earlier, and power was knocked out to my work neighborhood due to underground fires of the utility wires.  That was a little nerve-rattling. Miraculously, despite the morning crowds on the sidewalks, nobody was hurt.

Just two random pieces of bad luck?  I don’t think so.  There is more to consider, to wit, these three facts:

(1) Residents of the San Bruno neighborhood are saying that they had smelled gas for at least the last three weeks and had repeatedly called PG&E about it. It is unclear what, if any, repair work had been done.

(2) The Financial District explosion was the eighth manhole explosion in five years in downtown Ess Eff.

(3) PG&E recently spent $46 million sponsoring a failed ballot initiative that would have made in nearly impossible for local municipalities in California to create government owned and operated utility districts.  The California Public Utilities Commission even admonished PG&E that its campaign tactics were illegal. 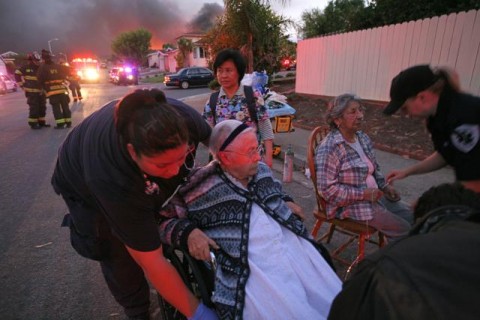 Perhaps some of that $46 million would have been better spent on, oh I don’t know, maybe infrastructure repairs?

Meanwhile, back in San Bruno, the police have declared the neighborhood a crime scene pending the determination as to whether foul play occurred. 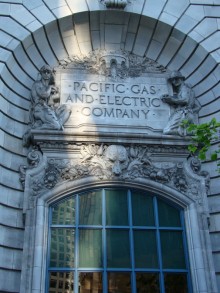 I agree that it is a crime scene and foul play occurred.  But I doubt the San Bruno Police Department is going to name as suspects the corporate overlords who created a situation in which maintenance may have gone by the wayside in order to spend millions to exploit the citizen ballot initiative process.

Since our Supreme Court thinks that corporations are like regular people and monopolies like PG&E can spend all they want on elections, maybe the San Mateo County District Attorney’s Office will treat PG&E like a person and charge the corporation with premeditated murder.

I’m not holding my breath.

It sounds like some major league corprat negligence. Whether or not it is provable in court is another matter.

New Mains cost money, money that can be better used by the CEO of PG&E to be placed on his bed for coke binges with supermodels and/or rent boys.

The San Andreas Fault runs right through that ridge in San Bruno over towards Pacifica. Maybe it was the fault of the fault…

@SanFranLefty: We have a winner!

@ManchuCandidate: CFO heard about the gas leak, checked their commercial liability coverage and, seeing it was up to date and covered catastrophic explosions, went to lunch.

Remember this? Not nearly as horrific as this gas explosion, but pretty scary. Like so many cities, NYC has underground infrastructure that, in some cases, is a century and a half old. I work in midtown most of each year (downtown occasionally) and I sometimes ask myself, as I walk along: Is there something beneath my feet that could turn me into a cinder? Of course, there is, but will the pipes be upgraded, or just fixed when they fail? I think I know the answer. Lawsuits are cheaper than fixing things.

As soon as I heard it was a gas pipeline, I thought: “See, fucktards? Infrastructure maintenance is important!”

@Signal to Noise: Maintain or, if it makes more sense, replace.

@SanFranLefty: Bet Mr. Lefty is proud of you for the headline aka thanks for the earworm!

Aren’t PG&E the assholes that refuse to link up home owners’ solar panel installations to feed back into the grid?

Among the dead are:

…Jacqueline Greig, 44, and her eighth-grade daughter…

Greig has worked for the California Public Utilities Commission for 21 years and is a member of its Division of Ratepayer Advocates. She also is listed as a member of the natural gas committee on the National Association of State Utility Consumer Advocates.

One of the projects she was involved with was how PG&E went about charging for inspection of transmission pipes.

@FlyingChainSaw: Not that I’m aware of…PG&E are pushing solar panels left and right because as I understand it, they want you to feed back into the grid but it only gets homeowners to zero (in other words they don’t pay you to feed the grid).

@Dodgerblue: Environmentalists are to blame, apparently. This is cropping up in the comments of all local media and it’s like these commenters are all suddenly reading from the same script – if only those pesky environmentalists and meddling PUC regulators didn’t make PG&E do all those EIRs, they could have replaced those 1948 pipes ages ago…

@SanFranLefty: Of course absent those meddling busybodies, the utilities would sit on their butt and do nothing until after some sort of apocalyptic meltdown. See BP in the Gulf.

Torturing municipal utilities to upgrade their infrastructure before the shit hits the fan is a big part of what I do, so I’m acutely aware of the temptation of “out of sight, out of mind”.