But Was He the Gayest Batman Villain? 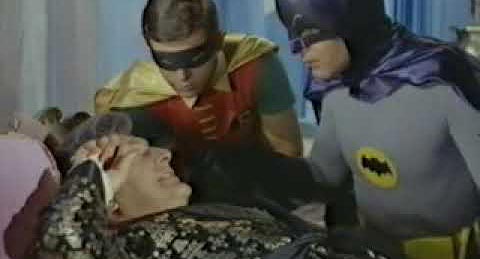 “The Liberace Museum, which has exhibited the jewelry, pianos, garish gowns and other artifacts owned by the great pianist and showman, announced today it will close effective Oct. 17… At its peak, the Liberace Museum rivaled Hoover Dam as one of the region’s most popular off-Strip tourism destinations, drawing 450,000 visitors per year.” [Las Vegas Sun, via PourMeCoffee]

And these were the gayest Batman and Throbbin since they were lovers in real life.

I AM GAYEST BATMAN VILLAIN! BWAHAHAHAHA!

@Tommmcatt Cannot Be Arsed To Think About Sharon Angle: Spandex is so unforgiving

If Liberace is vulnerable, will Elvis be next? Those who fail to learn the lessons of history will be bound to repeat it.

Not that thats a bad thing, but it was the dishonesty forced by our cultural bigotry against gays, the revelation of the double lives and denial, that was wierd, though I always understood why it was a situation forced on homosexuals in that era.

But there is another, and to me fascinating, strange, bizarre, wrong, aspect of our culture that surrounded the topic of homosexuality during my formative days of the 60s and 70s.

I am referring to the “code,” the wink and a nod public acknowledgment of homosexuality, while pretending otherwise, that was strange.

They said openly that Liberace was a “confirmed bachelor,” my parents knew what it meant and giggled,. but us kids, we were clueless.

60s sitcoms were filled with leading men who were lisping nancy-boys, but there was never any recognition, to a kid it began to seem natural that the father/husband character in a typical family would be an obvious friend of nancy.

Please tell me, what is a typical confused 10-year old boy supposed to think of Paul Lynde? Or Liberace, about whom the charade appeared to be very amusing to the adults.

It was completely forbidden in society to just say it directly, yet at the same time there was public acceptance of them. Good on one level, bad on all the others.

Looking back, its just so bizarre, is all I am saying.

Its better now, a little, anyway, that those who are out are really out, and , for example, I can explain to my son, some people are homosexual, some heterosexual, and its not bad, it just is. That is something I have already discussed with my 10 year old, prompted by hearing him using homosexual slurs. Picked up on the bus.

Its still horrible that in the pigfucking areas of the country, homophobia is still not just a socially acepted bigotry, its a socially mandatory bigotry, and the failure to hate faggots, gets you branded and hated as a faggot.

It just all fucking sucks, I guess, is all I have to say, we were decieved, society sent these evil messages, confused by the “wink and a nod” chuckles, but the hate still prevails, and its so ugly ansd awful, and I hate it.

@Promnight: Please tell me, what is a typical confused 10-year old boy supposed to think of Paul Lynde?

All I ever thought was “whats with the ridiculous glasses.”

I’ve driven by the Liberace museum in Vegas a couple of times. Looks kind of sad, like a moderately succuessful brown stucco Southwestern bridal or floral shop.

We’re open in discussing the Gay around Son of RML. We’ve also banned gay slurs in the house.

Back in the ancestral homeland, dudes are pretty much forbidden from helping the ladies cook for our frequent feast days, except for my gay cousin who is a whiz with pies and bread cooked in wood heated outdoor adobe ovens called “hornos.”

Had a wisdom tooth out today. Stayed off the heavy duty drugs so I could have a martini tonight and not pull a Jimi Hendrix.

ADD: after handloading ammo today, I have enough powder lying around to shoot a Bugs Bunny cartoon.

@Promnight:
so much has changed prommie. it makes me very sad that liberace, rock hudson and so so many others went to their graves directly from the closet. i mentioned my gorgeous 24 year old nephew came out this year (as if we didn’t know) and i swear, the family almost threw a party, and the poor kid is hassled to death about settling down with a nice jewish boy. his rate of meddlesome family fixing him up has not changed–only the gender.

@baked: @Promnight: There was a whole hidden subculture in Hollywood – still is if one is to believe the stories about George Clooney, etc – that provided a social world of the closet.

I shared a dressing room with the man who sang Abba Dabba Honeymoon with Debbie Reynolds (it doesn’t get any gayer, folks) who was very cute as a young man and who now really mourned the passing of that extreme closet. He had taught himself to find it exciting. Those men and women weren’t pitiful creatures of the shadows and we should be careful to try to see their lives in the context of the times. By the way, A D Honeymoon man is the second man I know personally who made out with James Dean. It wasn’t good but their world was fairly open in its way. The rest of the country saw Liberace, the house fag but had no idea what was really going on. Look at Adam Lambert’s fans actually being shocked that he was gay. Ricky Martin’s or Mitch McConnell’s not so much. The difference is that he could come out. A Lambert, i mean. I remember as a very young man being shocked when I found out that men I was working with were gay. I guess because it was so internalized as a secret shameful thing that it took time to grasp the fact that one could lead a successful respected life while pretending your boyfriend shared your bed to cut down on expenses.

Of course, for members of the English upper classes it was never an issue since they never abided by social norms. They could be as camp as tits so long as they didn’t openly defy the establishment as did Wilde.

I have a cousin who is gay but it’s never been a topic of discussion in the family. I think the reason for that is simply that we are WASPs — we don’t discuss anything of a personal nature.

I have a candidate for a non-gay Batman villian: Mr. Freeze.

After all, it’s tough to get much action in an isolation suit set at -50 degrees – shrivel city. Although, come to think of it, Batman’s talk of “curing” Mr. Freeze does hearken to fundy gay cure theories.

@Walking Still: There’s probably a Queer Theory dissertation on the series out there, with a chapter devoted to the bent camera angles on the villains.

@Tony Blair Witch Project:
i know exactly what you mean…see: the history of fire island.
and thanks for your words of support. the run of show thing really hit home. i can go for that. same as pestorking club med GO’S-never counts.
you’re the best, mum!!

@baked: There you go, darling.

Are you really sure you want to be wearing those pants? No, they look very nice on you. Why would I lie? They do? I was just asking? I can’t ask?

Isn’t Tim Gunn our Liberace? He fulfills the same function: that of court eunuch. I just saw him on Jon Stewart. Startling that he doesn’t seem to know how to properly tie a tie.