The Jokes, They Just Write Themselves 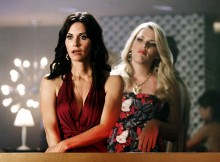 It’s been a long day, a long week, a long month, and a long fucking summer and year for your correspondent SFL.

The drumbeat of sad news stories, Sarah Palin mosque antics, Glen BecKKK rallies, and rising unemployment has totally harshed my mellow, and not even Sheryll the Dog is cheering me up.

So when I saw this headline tonight on the San Francisco Chronicle‘s website, I had to laugh because the joke just wrote itself.

I expect a full on-the-spot report from our East Bay correspondent, Walking Still, but here’s what the Chronic had to say:

Berkeley police shot and killed a mountain lion early Tuesday as it roamed a neighborhood around the city’s world-famous Gourmet Ghetto for at least an hour, leaping over fences from one backyard to another.

Three officers shot and killed the 100-pound adult female with rifles and a shotgun shortly before 3:30 a.m. outside a home on the 1600 block of Walnut Street, just blocks from Chez Panisse restaurant, the flagship Peet’s Coffee store, the Cheese Board Collective and other businesses along busy Shattuck Avenue in North Berkeley.

[….]Two officers with .223-caliber rifles shot the lion, but it’s unclear whether they hit the cat. The mountain lion then moved into an adjoining backyard, where a third officer with a shotgun killed it.

Update: Deletions per management. Clique the linque for full story.

Why did they have to kill it? Poor kitty.

A real cop would have just punched it the face and told it to get lost.

@Mistress Cynica: tranquilizer darts anyone? they do it on Lost all the time.

Management gets nervous about long news excerpts, what with copyright-trolling media lawyers making the rounds the days.

@IanJ: That’s in the ellipses.

@nojo: FSM knows there are plenty of out of work ones with nothing else to do…

Tweety is safe. for now.

Chez Panisse was safe. It was probably heading down to Spengers for some grilled salmon and a big shot of Jack Daniel’s.

I regret to say that I was lollygagging in bed at 3:30 am, so I missed the action. A couple of hours later I was walking to my BART station about a mile from there. I’m glad I was spared an unwanted close encounter before my morning coffee.

Mountain lions and deer are pretty common in the Berkeley hills. It’s less common for them to come down to the flats where the traffic is heavier. Once or twice a year I’ll see deer on my morning walk to BART – skunks and possums are common. Fortunately, I’ve been spared a mountain lion.

I don’t have a lot of issues with the police response. Even if they’d had tranqs (which they don’t) they’re a bit dicey on something that large and potentially aggressive in close quarters. The least acceptable result would be a mountain lion that escaped such an encounter and lost its fear of people – a similar problem to trash dependent bears.

@Dodge: I thought it was looking for a dish of beef chow mien? Wha-HOO…

@Walking Still: I’ve seen two mountain lions and six bears (and heard one more) up in the mountains in the past 15 years or so. I’ve seen at least another half dozen sets of tracks.

One mountain lion poked his paper plate sized face through some oak brush by a small trout stream, looked at me, and then seemed to disappear into this air. I later saw some big cat tracks over my fishing buddy’s boot prints when I walked up the dirt road to look for him.

My best bear encounter was when I saw a mama bear and two cubs pass through some small Ponderosas at the edge of a meadow about a hundred yards away. The wind was blowing away from me and I was in full camo up against a tree trunk for turkey hunting so they didn’t see me. Then there was the time last fall when one grunted at me from behind some oak brush about 35 yards away.

I have started carrying 1 oz. lead slugs for my shotgun while turkey hunting now, although some say that buck shot may be a better option. In addition, I carry my .357 revolver loaded up with big fat 180 grain bullets, which are barely adequate for last ditch self-defense against Mr. Bear but totally suitable for the cougar. The most scared I’ve been in the woods was when I saw a poacher on my friend’s ranch, however.

@redmanlaw: Yep, I’d be far more scared of a poacher than any wildlife. The wildlife will usually have the common sense to know that I’m not very good prey. Humans sometimes have no common sense at all.

Ecotone. This douche had it coming.