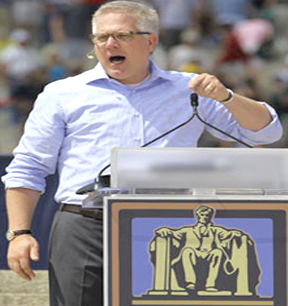 Slate columnist Christopher Hitchens was lucid enough this week to point out that Glenn Beck’s weekend tantrum on the mall was expressive of white terror at being overwhelmed by growing populations of non-whites. Hitchens observed of the crowd’s pathetic attempt at rousing solidarity:

The numbers were impressive enough on their own, but the overall effect was large, vague, moist, and undirected: the Waterworld of white self-pity.

That’s all true but misses the most important aspect of the of the teabagger festival of hate and rage:

Fun facts: he claims he was wearing a ballistic vest (self image problems Glenn?) and metro ridership for that day was only up 200k from last year – with one other rally going on in the same area.

@Nabisco: If he was a real asshole, instead of a minor league asshole, he would have had a charge planted on the front and faked an assassination attempt. At least that would have given his customers something to talk about on the way back on the bus.

I agree judging by the white olds littering the Beck Power Hour.

I don’t know what would happen if we ever elected a non-white PM here in Canada City. I would like to hope we would be better than that, but I also grew up in the mostly white boonies where the ethnics could be described as “the Chinese family, the Korean family, the Indian family and the Jamaican family” so I suspect the reaction would be similar.

@ManchuCandidate: I’m having a very difficult time trying to think of more than two kids I grew up with through twelve years of Eugene public schools who weren’t Average White Boys.

For those of you who think puppies are more entertaining than Glen Beck, you’ll be glad to hear that Lucy now has a blog. :)

Maggots everywhere are rising up in rage at being compared to Glenn Beck (or they would be if they could rise up).