If You Didn’t Want Our Help, Why Didn’t You Stop Our Invasion? 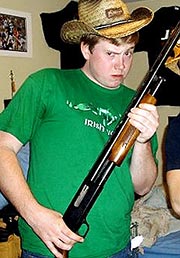 Enright, a senior at the School of Visual Arts in Manhattan, returned from Afghanistan in May after 35 days of filming a documentary about front-line troops.

When he was arrested Tuesday in midtown, Enright had a personal diary filled with pages of “pretty strong anti-Muslim comments,” a police source said.

The source said Enright’s journal equated Muslims with “killers, ungrateful for the help they were being offered, filthy murderers without a conscience.”

Quite honestly, there might be a (non-absolving) case of PTSD at work — we send kids to war all the time, but usually we train them first.

On the other hand, invading countries and calling their citizens ingrates for all the liberating death and destruction we wreak upon them seems to be a habit of our glorious nation.

nojo
1:04 pm • Thursday • August 26, 2010
comment »
Choose Your Delusion
How Not to Disclaim Responsibility for an Entirely Coincidental Attack Let’s Try Waking Up Again, Because Clearly We Did It Wrong the First Time
11 Comments
Mistress Cynica

Hey, we learned from the best: the British Empire. India, like Afghanistan, was a notorious ingrate.

This kid pegs the maggot meter. Shame the conscienceless ingrates didn’t dismember him and play polo with his head while he was over there. Would have saved a working stiff from a slashing.

Muslims are vicious, conscienceless killers and I’m going to prove it by murdering an innocent cabbie who’s just trying to make an honest living and keep his family clothed and fed.

Oh, wait… did I just wind up making the opposite point? My bad.

Is this one of Meg Whitman’s kids?

@TJ/ Jamie Sommers /TJ: I may have to start paying attention to them, but it seems like a stretch at the moment. Not that I’m above reading about them elsewhere. Get off my field!

Mossberg 500 shotgun with a ventilated rib? Sure looks like one, says the man who owns two (a 12 gauge turkey model in camo and a 20 gauge in walnut that I have actually gotten a turkey with).

@redmanlaw: Honestly, I was wondering whether the kid was posing with a BB gun.

At least he’s keeping the booger hook off the bang switch.

@redmanlaw: Is “Keep the booger hook off the bang switch” the official motto of Stinque yet? Because it so should be.

@TJ/ Jamie Sommers /TJ: Not doughy enough to be a Harsh-Whitman spawn.

Ugh. Mossberg 500…seriously yuuu-gly. Gimmie my dad’s 1960 vintage 870 Wingmaster. Or maybe my 1928 Remington Mod. 12 that nobody managed to install a poly-choke (shudder) on and completely fuck up. Now there’s a bee-you-tiful scatter-gun.

First thing a prospective 500 owner should do, should they purchase one of these mechanical abortions, is immediately replace the PLASTIC (nice job engineers…Cheap-O-Meter pegged and smoking) safety selector on the top with a steel one.

Otherwise, if said operator accidentally drops it in a time of peril, breaking the craptacularly cheap plastic doo-dad, he suddenly is the possessor of a short and quite ineffective club.

And bringing a club to a gunfight is usually not a good idea.

(And redmanlaw, “booger hook off of the bang switch” is the funniest thing I’ve heard all week. I’m keeping and using that one. Bravo, sir!)