How Not to Disclaim Responsibility for an Entirely Coincidental Attack 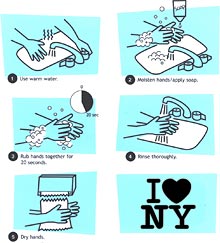 So, you’re the demagogic leader of a national campaign protesting a local zoning decision, and somebody slashes a cabbie for worshiping the wrong deity. Do you…

(b) Issue a brief statement proclaiming your peaceful intentions and condemning all violence.

(c) Accuse your opponents of staging the hit.

If you answered (c), welcome to Stinque, Pam Geller! Thanks for dropping by!

And if you’re unfamiliar with Ms. Geller, you should be: She’s the Orly Taitz of anti-muslim bigotry. Her website Atlas Shrugs is Ground Zero of the Not-Mosque protest. But unlike Orly, nobody is laughing Pam out of the room. Yet:

How deranged is the left? The slasher of Muslims works for the Cordoba/Park 51. This is what is building an Islamic supremacist mosque on Ground Zero. The only reason we know who this human filth is and who he worked for because of the brave and brilliant cab driver who, despite being slashed multiple times, locked this savage in the back of his cab.

Okay, small problem: Alleged Human Filth (no argument here) Michael Enright was a volunteer for interfaith organization Intersections International, not an employee of the Not-Mosque developer. Intersections does support the Not-Mosque, but from the sidelines — just like Michael Bloomberg! (And us!)

Can you imagine if the would be Cordoba murderer got away. They would be hanging us in the public square as we speak.

Clearly this leftwing loon hoped to slash this poor man in pieces, get away, and have the opposition blamed for this heinous and vile crime. This is how low the mentally ill left will go.

Clearly. Really, there’s no other possible explanation. It’s just like crashing a teabagger rally — but with a knife! What leftwing loon wouldn’t sacrifice himself to the anti-bigotry cause like that?

It’s no wonder the leftwing mainstream media is shushing up this story.And the Islamic supremacist, Hams funder CAIR blasted it in their alert. Their whiteash will be interesting tomorow. I wouldn’t be surprised if CAIR had a hand in it …………. the CAIR offices are right nextdoor  to Imam Rauf’s and Daisy the Con’s offices n Riverside. How convenient.

In case you missed the insinuation in all that, let’s make it clear:

Pam Geller, leader of the Ground Zero Mosque protest, suggests that the Council on American-Islamic Relations set up Michael Enright to stab a New York cabdriver.

Now, just lead all newscasts with that today, and we promise you the Not Ground Zero Not Mosque controversy will be gone tomorrow.

nojo
7:00 am • Thursday • August 26, 2010
comment »
Choose Your Delusion
Sun Rises in East If You Didn’t Want Our Help, Why Didn’t You Stop Our Invasion?
19 Comments
ManchuCandidate

Stupid and deranged. I expect nothing less from Atlas Juggs.

Nice try, but actually that’s a right-wing ploy. But thanks for playing, anyway.

Why is CAIR funding hams?

Are we going to analyze white ash today because it’s Science Friday?

Poor Pammy — her alcohol abuse has caught up.

And who says Republicans don’t have great ideas?

Now, just lead all newscasts with that today, and we promise you the Not Ground Zero Not Mosque controversy will be gone tomorrow.
dont know it this was irony or not but I think it would only escalate it.
absurdity is no longer a disqualifier

your tax dollars at work. I just got this from a friend who works for NASA:

The Constellation program funding was cut but I think someone forgot to tell the NASA team that I am contracted with. We are currently playing with two 18′ diameter aluminum domes. The idea “was” to build a common bulkhead between liquid oxygen and hydrogen and pray there would never be a leak. While this NASA team is going forward with the “experiment”, NASA management has decided the cost of producing such a bulkhead will not give us the weight savings to cover the cost. So, after we finish it, it will just sit around until someone scraps it. Such is the operation of our government. But it is fun!!!!”

Foghorn Leghorn a classless prick to the bitter end.

@TJ/ Jamie Sommers /TJ: Maybe he was busy pestorking his wife, what with she in that eye-searing sexy leopard-print jumpsuit for Election Day GOTV work at the Mesa titty bars….

And the NY Post reports that a drunk man went into a Queens mosque last night during evening prayers, screamed insults, and pissed on the rugs.

The Muslim Dude does not abide mosque-pissing.

@SanFranLefty: All part of the left-wing socialist plot, obvs.

@Capt Howdy: absurdity is no longer a disqualifier

I gave some thought to that last line for that reason, but I decided to run with it.

Here’s why: Geller’s been pushing the issue for months, but it took a tweet from Palin asking for “respect” to push it national. Then Newt went over the top with a Nazi comparison — and got laughed out of the room.

Point being: Outside of Fox, nobody’s really heard Geller as the main spokesperson on this issue — nothing like the infamous interviews with Bachmann and Orly that pushed them to the side. The issue has been too polite, as if it was any other issue.

I know, demagoguery is never “polite”. But if only Geller got more MSM airtime, I think we’d see a different picture than veteran politicos trotting out their focus-grouped lines.

Pam Geller needs to be the face of the protest. Her views need to be aired in full detail. The irony is that I don’t think the issue has been covered enough.

The NYPD would not confirm to TPM whether Rivera’s curses were tied to Islam. And subsequent reporting by the Washington Post suggests Rivera was so drunk he probably didn’t know he was in a Mosque…

NYPD now confirming to TPM that they are not treating this as a bias case.

@nojo: Pam Geller needs to be the face of the protest.
Or at the very least, its tits.

@Mistress Cynica: Up to bat substituting for Prommie.

@nojo: He just cursed at them and flipped them off before pissing on the rugs…could have happened anywhere. Yeah right.

@redmanlaw: Where the hell is Prommie?

If Rupert’s Post retracts, I think that ends the angle.