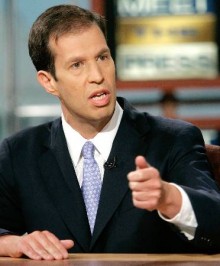 And vicious anti-gay Bush partisan Ken Mehlman is gay.  Who could have predicted?

Ken Mehlman, the erstwhile chairman of the Republican National Committee and campaign manager for George W. Bush’s 2004 reelection effort, has come out of the closet as gay in a column published in The Atlantic.

Mehlman came out in a column by Mark Ambinder on the website of The Atlantic, after the blogger who outed former Idaho Sen. Larry Craig (R-ID) and onetime Virginia congressman Ed Schrock revealed that Ambinder was to publish the story. Blogger Michael Rogers was the subject of the documentary “Outrage,” a film about outing gays in government who have used their positions of power to advocate against gay issues, which aired earlier this year on HBO.

Another Bushie who should be driven from polite society.

Steve in Manhattan
8:30 pm • Wednesday • August 25, 2010
comment »
Choose Your Delusion
Start the Bonfire Without Us How Not to Disclaim Responsibility for an Entirely Coincidental Attack
24 Comments
Tommmcatt Cannot Be Arsed To Think About Sharon Angle

The hits just keep on comin’….

@Tommmcatt Cannot Be Arsed To Think About Sharon Angle: The hypocrisy, you mean.

I piss on him. And his boyfriend.

It’s be better if he had a sex tape of him and Cheney and Bush and Rove eating each other’s assholes while watching videos of the Nuremberg rallies.

It wasn’t that big a secret…

Well, welcome to the rest of your life, Kenny.

Anybody have ready access to Mehlboi’s greatest homophobic hits? Because that would be so best.

@chicago bureau: I’d start with the 2004 election and the 13 or 15 states that had ballot initiatives to amend state constitutions to outlaw the homos from getting married. Between that and ballot box shenanigans in Cleveland and Cincinnati, Bush and Cheney re-stole the Presidency.

Wake me up when Turd Blossom finally comes out of the closet. You know he likes getting it up the ass from the leather boyz at the Chain Drive in Austin.

@SFL — my munnie is on Ari Fleischer to be the next to say, “um, you know something, guys….”

(Noted: I’m not big on offensive outing of closeted pols. Seems that us dirty fucking hippies are keen on insisting that private lives are just that. But every time something like this happens… I feel a twinge of pure, undiluted, almost orgasmic JOY. I feel guilty, though. I will just have to live with my shame, I guess.)

@chicago bureau: I don’t think that closeted pols who aren’t hurting gheyz should necessarily be outed gratuitously. But the instant they open their mouth and spout anti-ghey hatred or vote for anti-ghey legislation, all fucking bets are off. Drag those motherfuckers out of the closet to let the light of day expose their hypocrisy.

My D.C. gheyz greeted the Ken news with a big yawn.

@SanFranLefty: Like my not-gay member of congress whom an opponent ( my candidate) tried to out in a debate.

@SanFranLefty: Judgment at Nuremburg time. What is really pissing me off is that there are apologists for this man, and are accusing the left of being the enemy in this case — see the comments.

@rptrcub:
mediaite is a pretty right wing site. expected no?

@chicago bureau: So?
@rptrcub: I haven’t checked out Joe.My.God’s coverage of this yet….are they passing around the sticks for beating him and transporting his head?

@chicago bureau:
I lived with a man for 7 years who was married and had two kids.

@SanFranLefty: Pretty much. He has a string of posts.

Perhaps there’s a move afoot to try to corral the gay vote now that we’re all officially disenchanted with Obama. I can’t think that anything this man does is either accidental or free. Someone is paying for something.

@Capt Howdy: I’m not gay but my boyfriend is.

Well, after reading the two latest Stinque posts, and this NYT op-ed, I’m ready to go back to bed and plan my emigration to New Zealand.

@texrednface: Like I said, I could totally see Turd Blossom at the Chain Drive — Silver Dollar Saloon in SA or Austin’s Rainbow Cattle Company would be too public and Brokeback Mountain-ish for him. (Some of my Austin gheyz insist they’ve spotted him at the more divey of ghey bars).

@SanFranLefty: Joe’s really digging out everything that this guy was ever involved in. Kenny basically was sucking Roy Cohn’s zombie cock.

The country is so strange now that Paultard Adam Kokesh is beginning to make sense:

Adam Kokesh of Santa Fe lost to Tom Mullins of Farmington for the Republican nomination for the 3rd Congressional District seat. But the young, libertarian ex-Marine still is interesting to follow on Twitter and Facebook.

Lately he’s been weighing in on the “ground zero Mosque” controversy. And, as was the case during the primary campaign, Kokesh cannot be described as a generic Republican.

On Wednesday, he wrote, “I hereby convert to Islam! But don’t worry, I’ll only be like most Americans about their religions. I won’t really believe everything my religion says, I’ll primarily use it to judge other people, and I’ll only go to a mosque a few times a year.”

Later in the day he wrote, “As a Muslim Jewish American War Veteran, I think the churches at ground zero are an offense to Muslims (and Jews) killed on 9/11 and should be torn down immediately. However, the strip clubs can stay. I want to know what 72 virgins will look like.”

(The best comment he got for this on Facebook was from a woman who asked, “Virgins at strip clubs?”)

How does Kokesh really feel about the issue? Last week on Facebook he wrote, “Eventually, society will look back on those who are protesting the building of a mosque near ‘Ground Zero’ the same way that we look back on the Klan today.”

Unfortunately, a lot of people look fondly upon the Klan these days, if only in embracing its spirit.

The ‘Nadlappers are the Klan.