The WorldNetDaily As We Found It 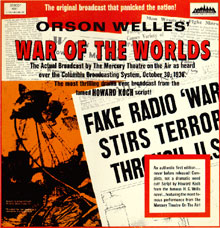 Ex–Vice President Al Gore, who has invested heavily in schemes that would give him profits from climate-related energy credits and carbon-emissions trading, is lamenting bitterly the “failure” of the government that means there probably won’t be comprehensive legislation taxing energy use and emissions right now.

And he’s blaming “right-wing” media, whose reports documented “Climategate,” the revelations of global-warming scientists that made it appear they were manipulating results and shutting out critics, for that failure.

U.S. warned of threat worse than Katrina, plague, WWII
Millions could die: ‘This is clearly not something you ever want to experience’

More horrifying than the plague of Black Death across Europe. More costly in lives than World War II. Financially it could make the Katrina repairs look like a pocketful of change. And it’s not a matter of if, but when.

That’s the alarming warning being issued by John G. Kappenman, owner of Storm Analysis Consultants and an expert of the dangers of electromagnetic pulse damage to modern society, with a list of qualifications after his name as long as a phone book.

I love how they harp on Al Gore’s supposed investments in clean energy; after all, everybody knows that none of the AGW deniers would *ever* have oil / coal / etc investments or (FSM forbid) be EMPLOYED by the oil / coal/ etc. industry….

As to the EMP issue, I don’t know what WND’s readers are so worried about. Most of them are part of the RW “Bridge to the 19th Century” program anyways.

I think they’re more afraid of this guy…

@al2o3cr:
Deep down they still think like kids. They assume that NO ONE on their side could ever be a:
1) Asshole
2) Non Xtian
3) manipulative SOB just using them to further their own gains
4) idiot
5) bad person

There are lots of scumbags on “our” side, but even scumbags make a pretty good point from time to time.

in movie news, have we seen the first and IMO best Cohen brothers film, Blood Simple? if not we definitely should.
even more so now that the guy who made Hero and House of Flying Daggers is remaking it.
not the biggest fan of remakes here. particularly of films as classic as this one but I make an exception here. it looks totally fabulous.

A Woman A Gun And A Noodle Shop

@Capt Howdy: I had to watch the trailer for “Space Battleship Yamato” first. Hey – where’s my Gundam movie?

Send the linky link to my guy who runs thefirearmsblog.com.

@Capt Howdy:
omg omg omg you are the ONLY person i ever knew who knows this movie. “blood simple” is when i fell in love with ethan and joel.
when they won an oscar for fargo i was like a proud mama.
someone is remaking it? a plague on their houses!!!!!

@baked: We’re in 100% agreement. I see no point in remaking a movie that’s practically perfect exactly the way it is. What’s the next film crying out for a remake, “Casablanca”, “Gone With the Wind”, “2001”, “Citizen Kane” or “The Wizard of Oz”?

@Dave H:
YOU TOO???
btw HOWDY, you spelled their name wrong! i’m sure grandpappy, who wasn’t the brightest in the box of crayons, said, i know! i’ll just drop the “H”, that’ll fool ’em!
so joel and ethan are stuck with COEN.
Blood Simple was genius. an example of the best of what filmmaking should be as a medium. i hate it when they turn books into movies, i don’t care how good the movie is, it’s not as good as the book. the exorcist, the godfather, …cuckoo’s nest, still can’t touch the book.
the Coen bros. are the best at utilizing the specifics that make (some) films legendary. i can’t say blood simple is my favorite, it seems that way because it’s where they first demonstrated their genius, so it holds a special place.
DaveH, he’s leaving again and this time i hope you won’t yell at me ! xxx

@baked: I quite liked it though I remember nothing about it now.

Example of film better than the book? The French Lieutenant’s Woman with a frostily lush screenplay by Pinter transforming Fowles’s somewhat irritating alternate plots into an elegant puzzle of a movie being shot.

Divorce Therapy Dog: something to hold on to between 4th and 5th marriages.

Purge Therapy Dog: sits beside the toilet to alert Princess that she has consumed more than 500 calories at any given meal and subsequently needs to hurl.

All valuable services and all needing an extra seat on the plane for medical reasons.

@Benedick:
you know i’m looking into this, right? i’m at least one dog and one cat missing from my pack, and it WILL sit on my lap. oh yes, it will. i can Bitch Please the flight attendants with the best of them!

@baked: Anxiety. You are allergic to all known anti-anxiety drugs. The only thing that can allow you to fly is presence of giant puppy. Reason for flight? You must be with your husband in the Holy Land of Hotness or you fear for your marriage. It all makes perfect sense. Wear black to the airport and request a wheelchair to the gate.

@Benedick:
i don’t WANT to go. it’s only 20 days and he’s staying with people i’ve had enough of. we’ll go back together in the spring for a couple months, that’s when i’ll have my service chihuahua on my lap.
btw, i was not telling YOU mom to shut up when i spoke of serg’s unveiling, it was meant for the snickering among us.
listen, sometimes i need a little Kaddish to go with Kubler-Ross.
said the atheist.

MOURNER’S KADDISH
An English Translation
Glorified and sanctified be God’s great name throughout the world which He has created according to His will. May He establish His kingdom in your lifetime and during your days, and within the life of the entire House of Israel, speedily and soon; and say, Amen.

May His great name be blessed forever and to all eternity.

Blessed and praised, glorified and exalted, extolled and honored, adored and lauded be the name of the Holy One, blessed be He, beyond all the blessings and hymns, praises and consolations that are ever spoken in the world; and say, Amen.

May there be abundant peace from heaven, and life, for us
and for all Israel; and say, Amen.

He who creates peace in His celestial heights, may He create peace for us and for all Israel; and say, Amen.
——————————————–
are we all so different? i have had the misfortune to learn this thousands of years old prayer in hebrew verbatim. i like that it does not speak of death. it speaks to Peace, Life and Flying Spaghetti Monsters.
yet it’s a prayer that no one wants to have to recite.