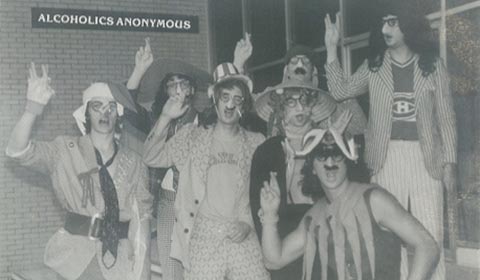 We don’t have time this afternoon to, y’know, read the Explosive! GQ post on college dropout Rand Paul, but if Politico’s good for anything, it’s mainlining the buzzy part:

The strangest episode of Paul’s time at Baylor occurred one afternoon in 1983 (although memories about all of these events are understandably a bit hazy, so the date might be slightly off), when he and a NoZe brother paid a visit to a female student who was one of Paul’s teammates on the Baylor swim team. According to this woman, who requested anonymity because of her current job as a clinical psychologist, “He and Randy came to my house, they knocked on my door, and then they blindfolded me, tied me up, and put me in their car. They took me to their apartment and tried to force me to take bong hits. They’d been smoking pot.”

Paul spokesman Jesse Benton… repeated his non-denial to me in an e-mail, adding: “We’ll leave National Enquirer-type stories about his teenage years to the tabloids where they belong.”

Glad that’s settled. Although, Mr. Spokesman, you might note for future reference that the Enquirer has a pretty decent track record these days.

Which leaves us with Baylor’s “NoZe Brotherhood,” a “secret society” that, to their credit, apparently did not involve togas, preferring instead loud jackets and Groucho glasses. (That’s your Future Senator from the Great State of Kentucky in the black robe and straw hat.) After Randy & Bro finished their bong hits, the night was still young:

After the woman refused to smoke with them, Paul and his friend put her back in their car and drove to the countryside outside of Waco, where they stopped near a creek. “They told me their god was ‘Aqua Buddha’ and that I needed to bow down and worship him,” the woman recalls. “They blindfolded me and made me bow down to ‘Aqua Buddha’ in the creek. I had to say, ‘I worship you Aqua Buddha, I worship you.’ At Baylor, there were people actively going around trying to save you and we had to go to chapel, so worshiping idols was a big no-no.”

And there’s your Small World connection for the day: Worshiping idols is a big no-no for Sharron Angle, too!

To summarize, he dropped out of undergrad, aced the MCAT, and was accepted to med school. Is that, like, normal? Granted that this happened decades ago and standards may have changed, but more recently I knew people who switched to pre-med “late” (end of freshman year) and had to take physics and whatnot over the summer just to catch up. I can’t imagine any of them having been admitted without all those courses under their belt, not to mention an undergraduate degree of any kind.

also if it had been Gaucho pants instead of Groucho glasses I would care more.

George Bush redux. Apart from the cheerleading and boyfriends. It doesn’t make RP any less boring, however. If anything it makes him more boring.

@Capt Howdy: If there was any kidnapping in my crowd, I was probably the victim.

I can confirm that we did worship Aqua Buddha, however. Frequently. Usually there was a line.

@nojo: Note: This does not include the time I passed out under the table. In a pool of grenadine. Never made it to the shrine that night.

Kidnapping is not kooky. It is a fucking capitol offense in some states.

@FlyingChainSaw: Agreed, although I don’t know that it’s registered yet — you have to get beyond the secret society, bong hits and Aqua Buddha for that detail to emerge.

Oh, and a point of clarification: Randy was born January 7, 1963. If the uncertain dating of the event holds, he was most likely twenty, and not in his “teenage years.”

Actually, I participated in a kidnapping when I was in college. One Halloween , my girlfriend and I blindfolded 3 guys from the fraternity where we were little sisters and took them on a tour of remote graveyards in the countryside around Columbia, MO, that we had scouted out on an old county map. We did preview the cemeteries and strike off any that had “No Trespassing” signs with bullet holes in them. The nice Jewish boys from the big city were pretty freaked out when they heard a cow moo.
So, I guess this qualifies me for the Senate?

TJ: Now this is how you throw a hissy fit, people.

The Baylor bubble. That explains a lot.

@ManchuCandidate: “I thought he was pre-law.”

@Mistress Cynica: That queen is an inspiration.