Stinque
Home Latest Comments Log in
If it smells, we’re on it.
Stinque
Mastodon: @stinque@mas.to
Gotterdammerung 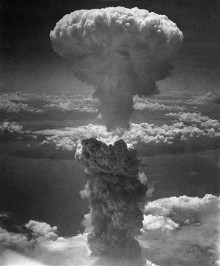 (NEWSER) – Bells tolled today as Nagasaki marked 65 years since the last time a nuclear weapon was dropped on a civilian population, reports the BBC, an attack that killed 70,000, leveled an entire city, and ultimately ended the last world war within a week. Though the US ambassador to Japan attended a similar ceremony for the first time three days ago in Hiroshima, John Roos did not attend today’s service.

Did we need to drop the second one?  The first?

Los Alamos, where the bomb was developed under the Mahnattan Project, is about a half hour from here. The lab put about six or eight lanes of traffic security kiosks on the road through its lands to the Valle Caldera and the Jemez Mountains after 9/11. When driving to the Jemez Mountains for fishing, we used to have to come to a complete stop, tell security where we were going and what we were going to do there. They stopped that in the last couple of years. We just roll by and wave now. The enhanced security, however, did not prevent a couple of Chinese guys from driving up to the gate of one of the facilities, jumping out and shooting pictures before speeding off.

Did we have to drop the bomb on Japan? No. The Allies could have invaded the islands and fought for every blade of grass until the country was bled dry, incurring massive casualties while doing so, or they could have put a blockade around Japan and starved them out by bombing and burning fields fields, fishing fleets and water infrastructure. Not exactly humane, but no WMDs. The Allies could also have asked Japan to give up. So there were non-nuclear options, maybe not the best options for minimizing the number of Allied casualties, or shortening the war, but there were alternatives. Just depends on what the goals of the political and military leadership were. They could have just cordoned off the country, declared victory and gone home.

Also: Marines need contractors to fix shit out in the field

@redmanlaw: To the best of my recollection, they asked the Japanese to surrender after Hiroshima, and the Japanese waffled … but my history could be wrong.

@blogenfreude: /scratches “ask Japan to surrender” off my list.

I think you’re right. (Paging Manchu!) Had something to to with keeping the Emperor on afterward, I believe.

@blogenfreude: @redmanlaw: Boys, you’re missing the point. We had two different fancy-pants toys weapons that we could try out on people who didn’t look like us. It was for science.

Slightly on topic, Flash for iFon/iFad.

w/r/t war and post-war Japan, I highly recommend “The Yamato Dynasty”. The Japanese were in it to win it, hummed Bruce’s “No Surrender” under their breaths, and McArthur kept the royals on because it was the only way to keep a major industrial power on our side.

@Mistress Cynica: They knew it worked. I’ve met some Mescalero Apaches who lived over the mountain from Trinity Site who remembered the flash and force of the blast.

@Nabisco: I saw a great documentary about a Japanese plan to build subs that held two planes so they could get to CA and bomb us — basically Kamikaze, because the planes would never be recovered.

The technology was so difficult that they weren’t able to implement the plan (well, and there was some internal stalling), although they did have two subs and several planes ready by war’s end. Yes, they were in it to win it, BUT one of the (ugh. memory fails) Japanese admirals thought this was a shitty thing to do, so he stalled as best he could. And then he died, and some warmonger took his place. I haz teh drunk, but I could probs find you the show if you’re interested. I’m pretty sure it was on PBS.

I’m so gonna send this in to Look at This Fucking Teabagger.

ETA: Well, I was. Apparently, it’s not there anymore.

@TJ/ Jamie Sommers /TJ: This fucker? I’ve got it saved in case it goes *poof*. Just lemme know if you want a copy of it.

@JNOV: I meant LATFT. The AzBar blog isn’t going anywhere. But thanks.

Did you read the article? Those fuckers almost got some cyclist killed.

@TJ/ Jamie Sommers /TJ: No, I totally missed it. Ugh. I’ve just about had it with those dumbasses. I get apoplectic if I follow their asshattery on a daily basis. I need a temporary break.

I’ve been otherwise occupied today with plans to warp young minds. Hope it goes over well. I’m trying to figure out how I’m going to keep from cursing in class. I guess I’ll keep a curse jar and buy them pizza or doughnuts for the exam review.

@redmanlaw:
That was part of it, but it also didn’t help the Russians entered the Pac War on the same day. The Japanese hate(d) the Russians more than the US Americans.

@Mistress Cynica:
That was part of it too. Two different types of bombs.

I’ve actually been to Hiroshima (25 years ago this July!) and went to the museum there and I’ve seen the displays. It was haunting. It was at that point I no longer casually thought everything would be solved by nuking people unlike a lot of the RW dipshit simpletons who think that casual use of nukes should be the US’ only foreign policy stance.

I’m of mixed emotions with this having relatives who have less than fond memories of living under the Rising Sun’s rule.

I think that any invasion of Japan would have led to the extermination of the Japanese as a nation and a people if the various island invasions are any guide. The Japanese Imperial Army grew more vicious and desperate the closer the Allies (mostly US though) got to Japan. The IJA’s treatment of civilians (even Japanese) is pretty brutal. I also figure that extermination would have happened if the Allies let the Japanese starve which is what was happening when Japan surrendered as the US Navy carrier fleet, subs and minefields had pretty much shut down any local shipping.

Despite what happened in Germany, I doubt that if the invasion happened that the Japanese would have been as well treated as the Pacific Theater was pretty much a race war (look at the propaganda on both sides.)

I still remember a long argument during a history tutorial over this. The white guy arguing that the dropping of the bomb was motivated entirely by racism and the yellow guy stating that the bomb was originally designated for Berlin. The killing blow in the debate was pointing out the date of the Trinity blast, July 16, 1945 and the date of Germany’s surrender May 8, 1945. Poor guy assumed that Trinity happened before Germany’s surrender. Oops.

@Nabisco: Well, McArthur also humiliated the hell out of the royals in subtle and not so subtle ways. The message, “You have been defeated and you will very publicly surrender!” was heard loud and clear throughout the islands. The argument is over whether it was necessary. Probably in order to get the rank and file in line.

Look at what happened in Germany after WWI — we were basically like, “Meh. March on back home like a victorious army, even though you’re not. It’s over. Bygones.” BIG FUCKING MISTAKE! I’m no fan or war, but you can’t let your enemy’s psyche remain in übermensch mode and not expect some assholes to get all uppity again.

I also seem to recall hearing about something similar going on in the Nazi atomic-bomb program; apparently Heisenberg etc were concerned enough about some of the political BS going on (notably, the Nazi attempts to get rid of “Jewish Science” aka relativity and chunks of quantum mechanics) to sandbag the development until the war was lost. I could be wrong, tho, as it was on one of the War Channels late at night.

@JNOV:
See also the end of the Civil War, as we’ve discovered over the years and are *re*discovering now…

@JNOV: He actually went to some lengths not to humiliate them, although he did try to deflate a bit the Shinto myth behind the Emperor. That being said, his lawyers essentially allowed the royals to write the articles of reconstruction or whatever they were called. The Yamato Dynasty is a well-researched peek behind the scenes; the unstated conclusion is that the Emperor should have been brought up on charges of war crimes, but he wasn’t because Mac knew society would crumble without it.

Plus, he was a-skeered they would turn sociamalistic if they were allowed to choose a new form of government.

What I wonder is whether the following would have worked:

First, a blockade along the lines Redmanlaw described above – nothing in or out, bombing of internal infrastructure and food supplies. While this goes on, we test and develop more nukes.

Then, a demonstration bomb – off shore, but where the cloud was in view. Offer the Japanese military the opportunity to inspect the event from relatively close range.

Then, if necessary, a second demonstration bomb – at the coast in an unpopulated area.

Then, say then next one will be on the mainland in an unspecified area unless there is an unconditional surrender.

@Walking Still:
Maybe, but I doubt it based on what I read about the mentality of Japan’s war leaders (in particular the Army.)

Plus there were really only 2 bombs available. They had parts for more, but needed a few months to assemble them.

@ManchuCandidate: Under my scenario, that would be part of the value of the blockade – buy time for bomb making.

@Walking Still: There was some talk about a demo bomb, but people thought that the Japanese military would not give a fuck anyway so they decided to nuke two cities then see what.

@Nabisco: He actually went to some lengths /not/ to humiliate them…

I disagree, but, remember, I was educated by hippies who also spent a good bit of time discussion our involvment in Chile.

If this discussion is still going, I’ll write more later. Off to training for the day, but basically every photo OP where MacArthur is towering over Hirohito was good PR for us. Didn’t we write his surrender speech for him? We wrote their constitution, where in letter if not in practice, female Japanese citizens are assured all equal rights of male citizens.

Boo! Gotta go, but I’m interested to hear how I may be wrong.