Opportunists Are Standing By 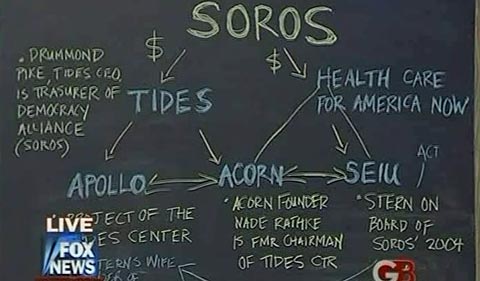 Hey, ever hear of the Tides Foundation? Neither have we!

Okay, fine, some of you have. Everybody who’s an activist — leave the room.

Truth be told, we have heard of them, but it’s a name that only crosses our path every two or three years — or only slightly more frequently than we’ve heard “Saul Alinsky” since a boring polisci class some thirty years ago.

Until last year, of course, when wingnuts made “Rules for Radicals” an Amazon bestseller.

So we’ve found it more than a little odd that Byron Williams was heading for the ACLU and the Tides Foundation when he got into a little exchange of Second Amendment Remedies with CHP on the 580 Saturday night. Like, dude, you’re going after a soap company? What’s up with that?

Or, to put it another way: If we, an advanced-degree Left Coast libtard who recently had to drop our NYRB subscription to help pay for our iPad, don’t know our Tides from our Surfrider from our Ducks Unlimited, how the hell is Williams so hip?

If you haven’t heard of Tides, a standard-issue lefty foundation that’s been around since the 1970s, it probably means you don’t watch the Glenn Beck program. It turns out that Beck rails against Tides constantly on his program — roughly weekly, according to our search of his show transcripts. That includes two shows less than a week before the July 18 shooting. Tides frequently appears on Beck’s famous blackboard renderings of who is pulling the strings of the Obama administration and the liberal media.

We pulled that from Salon, which, being Big, tries to be Respectable:

No one’s saying that Beck is advocating violence or that anyone who watches Fox will be whipped up into a frenzy to hunt out left-wingers.

Ummm, actually, the blogger who broke the story for you is saying pretty much that.

And so are we.

Bernie Goldberg has his James Adkisson. Bill O’Reilly has his Scott Roeder. Where’s Beck’s pet murderer? You can’t join the club until you have a notch on your microphone.

Yes, yes, we know: There are always a few nutjobs in the audience, and you just can’t control them. But when your sole purpose is to slander your political opponents with conspiracy and treason, what do you expect your viewers to do?

Because there’s a term for that in advertising. It’s called asking for the order.

Why Did California Shooter Target the Tides Foundation? [dagblog]

It does bring a new angle to “we report, you decide”.

P.S. From the blackboard: “Trasurer”?

@FlyingChainSaw: Followed by a thoughtful analysis of how the chumps were asking for it.

I’m sure the folks in the former Yugo and Rwanda who were tried and convicted for inciting violence sympathize with Bekc’s plight.

Upon further reflection, I suddenly realized that Bekc forgot to add the Reverse Vampires and Saucer People to the blackboard.

Not to go all wonky here as one of those lefties who knew who Tides Foundation was (though I was as completely puzzled by the randomness of them being selected), but I have to parse down Glenn’s graphics. I’m mesmerized by the list of lefty orgs on his chalkboard and on his whiteboard (click through the dagblog link). The list of social justice and environmental groups have done more to improve the quality of people’s lives than Glenn and his pathetic followers will ever do.

I don’t know what is more pathetic – his barely veiled xenophobia and anti-Semitism directed at George Soros or the blatant racism against the civil rights groups. The enviros are thrown in there, I suppose, because in the context of the flow charts it deals with the green groups’ efforts to bridge what some call in shorthand the green-black and green-blue divides to broaden the constituency of the groups. (AKA outreach to the African-American communities in the context of environmental justice and green jobs, and outreach to the labor unions in the context of finding new technologies and manufacturing jobs).

Also for the sake of full disclosure, I have more than a passing interest in this as I have worked for in the past and currently work somewhere that has received money from some of these foundations and groups. I also collaborate on a regular basis with one of the organizations listed, I give money to at least two of them, and a dear friend has worked for Open Society Institute for more than ten years.

In closing, I also love Glenn’s “I’m just a flight attendant” defense of his actions when he says shit like:

I told you yesterday buckle up your seatbelt, America. Find the exit. There’s one here, here and here. Find the exit closest to you and prepare for a crash-landing because this plane is coming down because the pilot is intentionally steering it into the trees…They are taking you to a place to be slaughtered.

@SanFranLefty: To paraphrase Glen: “I just lit a match and let it drop. It was the tank of gasoline that was responsible for the explosion.”

The angle that his viewers are going to be taken to a place to be slaughtered is, of course, in no way an effort to exploit the Holocaust for his cheap ends.

Iker, baby, call your SFLefty and I’ll comfort you over your loss to the octopus for the Golden Vuvuzela!

They were spotted picking up the ubiquitous tourist fleece jackets (when will people learn that it’s not Sandy Eggo warm here during the summer?), posed for pictures with fans, made out while buying tchotchkes, and apparently they had a meal at Boulevard, a great restaurant right next to my Y.

@SanFranLefty: Maybe we should team up. You trip Iker and I’ll console Sara.

@Walking Still: Would someone kneecap Twiggy for me already? I wanna see a Luxe Tour winner, at the end of the day.

@FlyingChainSaw: “They retort. We deride.”

@Nabisco: I think the Tour needs a Judge Judy spin off to better roll out the (literal) pissing matches over performance enhancers and whining over etiquette breaches,

Not that other sports couldn’t use something similar.

@Nabisco: We sentence. You execute.

@Walking Still: Read about your most awesomist gravatar in a drunken stupor. It’s an oil field that was reclaimed as wetlands? That is BEYOND awesome! Have you seen March Point? It will break your heart, but it’s good shit.

@Nabisco: So what is Tanya Harding up to these days? Has she made a sex tape yet?

Twiggy did the honorable thing and let AnDeLuxe win the stage after a couple of hours of mountain goat sprinting up the climb together. Should think the ladies would find that postage stamp making countryman kinda hot, in a long, lean kind of way.

We Tell You Who the Fuck To Hate.

And You Shoot Them in Righteous Glee.

The enviros are in there because, apparently, driving anything other than the most gas-guzzling car you can afford and *not* polluting the ever-loving fuck out of everything makes Baby Jeebus cry. Or something – it’s never entirely clear what it is that the RW has against being able to breathe outside. Maybe it’s because you don’t have to pay anybody for it…

Of course, that’s just a small part of the RW hate for everything *good* that’s actually been accomplished in this country. Social Security, minimum wages, the 40-hour week, Medicare/Medicaid, the entire FDA, the FDIC, etc etc. were all decried as terrible things by the conservatives of their day and have now become part of (barring some holdouts) what people *expect* from the government, somehow without making us all run around wearing berets and saluting Stalin. Hell, I’m sure even the TVA was described as a “socialist plot” at the time, but just try taking away the electricity that brings Benny Hinn and Faux News to those teabaggers now…

@JNOV: Haven’t seen (or before today heard of) March Point. I looked it up and it seems like something I need to see.

@JNOV: I think something along those lines circulated allegedly from her wedding night.

While I think Ms. Harding is most entertaining, I’ve never wanted to get quite that intimate with her. I see her more as a game show host with stern punishments for wrong answers.