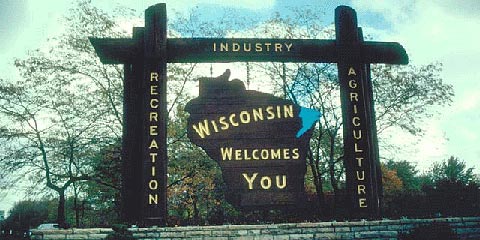 We suppose, to be consistent, we should object to this novel request:

State elections officials narrowly rejected a Milwaukee Assembly candidate’s attempt to run with the slogan “NOT the ‘whiteman’s bitch’ ” under her name on the ballot.

Ieshuh Griffin, a Milwaukee independent running to replace retiring Rep. Annette “Polly” Williams (D-Milwaukee), said in response she would sue the Government Accountability Board for infringing on her freedom of speech.

“I’m not making a derogatory statement toward an ethnic group. I’m stating what I’m not,” Griffin told board members. “It’s my constitutional right to freedom of speech.”

Then again, to be really consistent, we would have to flip the history of the United States on its head.

ARE YOU TRYING TO KILL ME?

I’ve always thought the DMV is infringing on my 1st Amendment rights by not allowing me to have “white he-devil” on my license.

OTOH, if she wanted to identify herself as “Cheesehead” the board wouldn’t have a problem with it.

Fernandez then spoke to the ebullient crowd. She stated that by signing this law the government is granting marriage equality to a group that deserves rights granted to them, not taken away. Change and progress are a good thing, Fernandez added, saying that once Argentina’s senators debated allowing divorce. Finally, the president pointed out the symbolism of signing the bill within the Hall of Science, saying it demonstrates that enlightenment trumped suspicion and fear.

@SanFranLefty: I lived in Spring Green, Wisconsin for a year – it is amazing how much cheese is consumed there. They don’t waste the parts trimmed off cheddar – they sell them in bags as “cheese curds”.

@JNOV: To be fair, I do think he should chip in for your Xanax.

@Mistress Cynica: RIGHT! Thank you! There’s not enough Xanax in the world for today. ::sigh:: And now that I’ve got beerz, no Xanax for me tonight. I’d like to wake up tomorrow.

@blogenfreude: Cheese is FUCKING AMBROSIA! That is all.

The slogan just didn’t have that je nais se quoi of something like ‘Skullfuck the rich’. She should try again with something catchier and more in tune with our cannibal anarchy times.

@blogenfreude: I was in Minneapolis for a while and used to go to a farmer’s market to buy those cheese curds. I thought they were a particular kind of light fresh farmer’s cheese, kind of like big soft flakes. I loved the town and was all ready to move there. I even made an industrial film warning against STDs. I forget what it was I was supposed to have.

@Benedick: Maybe you had curds?

@FlyingChainSaw: Don’t give me some sort of laughing fit where beer comes out of my nose.

LOL, I just noticed the word “narrowly” in the excerpt. And the article clarifies: “With one member absent, the board voted 3-2 in favor of reversing that ruling and allowing the wording. Under state law, however, four votes are needed for the board to act.”

Holy shit… is all I can say.

@Serolf Divad: It is Wisconsin, my home sweet home, after all. And Milwaukee, as racially segregated as it is, can be eerily fair.