Stinque
Home Latest Comments Log in
If it smells, we’re on it.
Stinque
Mastodon: @stinque@mas.to
A Thought At Bedtime, Kah-lee-fornication 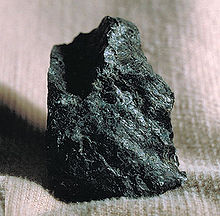 California Sen. Gloria Romero (D-El Ay), with the backing of an asbestos awareness organization funded by asbestos attorneys, is sponsoring S.B. 624, a bill that would remove serpentine’s designation as California’s state rock.

And geologists, a usually mild-mannered bunch who only get riled up about whether the Hayward or San Andreas Fault is going to rupture first, and if the State Earthquake Map accurately reflects the risk of that fault east of Sandy Eggo sliding another 10 feet, are fighting back.

What did serpentine ever do to deserve the hate? The Wiki describes this greenish rock as:

“a group of common rock-forming hydrous magnesium iron phyllosilicate ((Mg, Fe)3Si2O5(OH)4) minerals; they may contain minor amounts of other elements including chromium, manganese, cobalt and nickel. In mineralogy and gemology, serpentine may refer to any of 20 varieties belonging to the serpentine group. Owing to admixture, these varieties are not always easy to individualize, and distinctions are not usually made. There are three important mineral polymorphs of serpentine: antigorite, chrysotile and lizardite.

Many types of serpentine have been used for jewellery and hardstone carving.”

I have no idea what the first paragraph means, I understand the second.

But here’s where things get interesting. As the scientists tipped off the Sacramento Bee state politics columnist last week:

The bill flatly declares that “serpentine contains the deadly mineral chrysotile asbestos, a known carcinogen, exposure to which increases the risk of the cancer mesothelioma (and) California has the highest rate of mesothelioma deaths in the nation.”

SB 624 cleared the Senate on a 36-0 vote on May 18, but at that stage it merely defined “anaerobic digestion,” referring to composting. One day later, Romero removed its contents and replaced them with the serpentine provisions, a maneuver commonly used to slip something through with minimal notice.

Romero’s office says the language originated with the Asbestos Disease Awareness Organization, an anti-asbestos group whose major sponsors are law firms specializing in asbestos litigation. Asbestos litigators and Consumer Attorneys of California are backing the bill. Eric Bailey, a spokesman for the group, says the bill is a “symbolic measure to correct this historic mistake.”

The problem with SB 624 is that it flatly equates serpentine with deadly asbestos even though geologists say that’s incorrect. Geology websites have been buzzing with the criticism, pointing out that while serpentine rocks may contain chrysotile, most do not.

Were SB 624 to become law, declaring serpentine as carcinogenic, it could widen the opportunities for lawsuits against owners of property with naturally occurring outcroppings of serpentine.

The Gray Lady has even taken notice, with a front page article in Wednesday’s paper quoting a retired federal geologist laughing at the state:

“There is no way anyone is going to get bothered by casual exposure to that kind of rock,” said Malcolm Ross, a geologist who retired from the United States Geological Survey in 1995. “Unless they were breaking it up with a sledgehammer year after year.”

Dr. Ross and other opponents of the bill are concerned that removing serpentine, which is occasionally used in jewelry, as the state’s rock would demonize it and thus inspire litigation against museums, property owners and other sites where the rocks sit.

Really, Senator Romero, you have nothing better to do?

The geologists should get the asbestos defense lawyers to fund opposition to the bill. (I worked on the “Asbestos SWAT Team” for one of the big LA firms. They have “experts” who will swear that even if serpentine did contain trace amounts of asbestos–and we’re not saying it does, mind–it’s safe enough to eat like candy and use as a baby’s teething ring.)

Geologist here. And I do rock, thanks for pointing that out.

I wrote a post about this stupid piece of legislation last week only to realize through the SacBee article you reference that it’s not so stupid. It’s that last paragraph: “Were SB 624 to become law, declaring serpentine as carcinogenic, it could widen the opportunities for lawsuits against owners of property with naturally occurring outcroppings of serpentine.”

Consider it a Jobs Bill for Californian lawyers with kickbacks for legislators who pass it. Easy money in a tough economy.

Now I go back to snorting my serpentinite samples in protest. How can I afford my Rock’n’roll lifestyle, you ask.

@maitri: Just one correction for your post – the members of the Legislature like Romero and their staff will not be paid federal (less than state) minimum wage. They are exempt. Just the state employees like the geologists who enforce earthquake building standards and make sure schools and hospitals won’t collapse in the next big one.

@SanFranLefty: Yeah, I know, I should change that to “the state’s employees” for clarity.

Love a geologist and feel the earth quake! (I’m an endless pit of this schlock. Just ask.)

@maitri: Let’s just say it’s the knife that twists to know that the dilly-dallying Legislature is not feeling any incentive to move, and oh, I don’t know, make sure hospitals and health clinics get paid, since they’re not feeling the pain like state employees are. Sticks in the craw almost as much as the minimum wage being the lesser federal minimum wage rather than the higher state minimum wage that every other employer has to pay.

@SanFranLefty:
can you see me? i am wondering if my comments are still being monitored. just tell me if you see me and the 2 comments i made this morning. thankx.

@SanFranLefty:
thank you…nojo trusts me again! i be good, promise.

Why is everybody here so smart and professional? I am marketing scum, and y’all make me look bad.

@maitri: Something similar happened here in the NE with the radon racket.

@Tommmcat Still Gets Carly Confused With Meg: But you’re our marketing scum.

“There is no way anyone is going to get bothered by casual exposure to that kind of rock,” “Unless they were breaking it up with a sledgehammer year after year.”

Now wouldn’t this have been a much better career choice for Rush?

@Walking Still:
its true tho. the house I owned in LA had asbestos siding. it turned into a selling point when I was selling the house. because a.) it was really close, as in about two houses, away from the angeles forest and b.) you really would have to grind up the shingles and inhale them for them to hurt you.

@Benedick: My sediments exactly!
@Tommmcat Still Gets Carly Confused With Meg: Your odds of employment are higher, though.
@Nabisco: The Rolling Stones actually released a song called Continental Drift. You breccia!

Geologists have their schist together! Did you hear about the really slow rock? It moved a mylonite. (*THUNK* And then she was struck over the head with the hook and yanked off stage.)

@Capt Howdy: Was very popular here, too. New Yorkers tend to shriek and and away when told it’s on a house.

@maitri: We do have a rim-shot button. Unfortunately no hook.

Wow, do we need a hook or what?

That is a true thing. It is the presence of nitrogen or somesuch that makes us able to breathe it, right?

@Tommmcat Still Gets Carly Confused With Meg: It’s the ultimate oxidizer (by definition). Oxidization is pretty much the death of anything when uncontrolled.

@Tommmcat Still Gets Carly Confused With Meg: Of course, nitrogen at partial pressures greater than around 20-30 psi is also toxic, but great fun.

@Tommmcat Still Gets Carly Confused With Meg: @IanJ: Its my experience that hydrogen peroxide heals all wounds, because it kills kills, faster, peroxide, kill kill, everything. Even toenail fungus.

@Prommie:
ever treat a wanky ear by pouring peroxide in it?
I do this from time to time. its a trip.

@maitri: Who are you? Go away. I love geology, which I only know from McPhee, and Traces on the Appalachians, which has as its sole topic, serpentine. And somewhere I read a whole book about the oophyolite sequence. I want to hire a geologist to take me on a trip to explore roadcuts, like McPhee did, across Interstate 80. Everywhere I go, I must know whats beneath me, and how it got that way. The traces of billion-years past seafloor spreading zones, eventually pushed up onto a continental margin as the rest of the seafloor plate was subducted, then raised into a mountain? Wow, serpentine is neat.

@maitri: Tip your waitress, try the veal, I think we catch your drift on the puns.

Are you the flavor of geologist who goes around digging holes and trenches and staring at dirt? Or the one who clicks on ArcGIS all day? Or both?

There are arguments for both sides, but simply saying “we have better things to do” is selling this short. People don’t know about the widespread dangers of asbestos outside of TV commercials, so why blame advocates for using the serpentine issue to support their causes & raise awareness? Serpentine might be harmless in nature, but it also was widely used industrially too, which carries an equal stigma to case-hungry lawyers. There are some more thoughts on the issue at http://www.mesorc.com/banasbestosnow/blog/ if you’re interested.

@Prommie: I have a book called Roadside Geology of New Mexico (must be in my home bookshelf) that you can get for most western states that does cover what you’re talking about. In addition, the New Mexico Bureau of Mines and Mineral Resources put out a series of trail guides for various parts of the state. I have a copy of their Trail Guide to the Geology of the Upper Pecos (the mountains just east of here where I spend a lot of time) that includes a geological map in a pocket. I got the 1989 edition for $7.50 in 2005.

ADD: The guide book says that geologists saw grizzly bears in the 1880s on Rito del Oso (Bear Creek), which is where I was fishing a couple of weeks ago.

Back to work. The shit is just piling up around me.

@Tommmcat Still Gets Carly Confused With Meg: Is that an inside joke, or are you reading my mind about the “Kenny G” entry I almost included in the poll instead of Myron?

Isn’t there something kinda…public relations-y…. about that comment? Is it just me?

@Tommmcat Still Gets Carly Confused With Meg: It’s frightening. It’s so calm. So soothing. It makes me want to reach for my ice pick.

Followed his link, and it’s the “Mesothelioma Resource Center,” which I’m sure are nice folks who do good work. He probably planted comments like this everywhere the “state rock” story got mentioned last week.