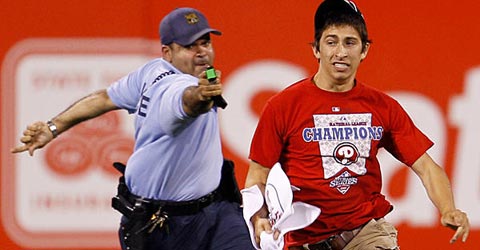 So, what does it take to put tasering on the national agenda? Three hundred deaths? Grandma getting zapped? “Don’t tase me, bro”?

How about a kid running onto the field during a Phillies game?

The Philadelphia Police Department has said that the officer acted in accord with department guidelines, which allow officers to fire their Tasers to subdue fleeing suspects…

Many police officers argue that cultural criticism of the Taser is largely unfounded since its benefits — the relative safety of the device weighed against fewer injuries to the police officer — are greater than the possibilities for abuse.

“We didn’t get this [negative] reaction when nightsticks were used to split heads open, but because of the technology and what it does, the media have really exacerbated the issue of the Taser,” former Boca Raton, Fla. police chief Andrew Scott told the Monitor in 2008.

So we have here a fleeing suspect, who in years past would have been bludgeoned instead of zapped, since he’s clearly a risk to the fat fuck chasing him. Got it.

this to me was one of the saddest comments on where we are as a country in a long long time. just sad. pathetic actually.

@Capt Howdy: Sports talk guys yesterday were mostly in support of the kid zapping on grounds that he may have been a Mohammedan with a rifle or a bomb. “It could have been much worse, etc. . . ” I think most of them also liked the insta-punitive aspects of the tasering, although 1/2 of the Mike and Mike in the Morning team (the one who did not play in the NFL) tried to question why it was necessary. He backpedaled like he was going to the wall for a fly ball.

/crickets for sports metaphor that only Dodgeballer would get

Hey, it’s Philly. The kid is lucky they didn’t stomp him to death at home plate.

@redmanlaw: The Dodgers did a lot of backpedaling last night — it was 9-0 Milwaukee after two innings. I was wondering whether Don Newcombe started for us (he’s still alive, does PR stuff for the team).

@redmanlaw:
I heard the same thing (Kid coulda been a turrowist) briefly up here in Canada City too.

I look at this way, nobody comes out covered in glory. Apparently, the kid’s dad said it was okay to rush the field.

Dumbass is 17. He was born around the same year the Blue Jays won the World Series over the Phillies where Mitch Williams kacked twice in dramatic fashion and got death threats from the phaithful.

The cycle of idiocy continues.

I dont condone the guy running out on the field. but where do we draw the line? when a 6 year old gets tasered in WalMart for being a brat?

@Capt Howdy:
Just how bratty is this brat?

Just kidding. Like I said, no one looks good. Failure of everyone involved.

I think is has as much to do with cops becoming pathetic fat fucks who could not catch a cold as anything else.

just heard a hilarious thing. is it true that San Diego means “a whale’s vagina”?

I’d be more outraged if it were somebody other than a Philadelphia sports fan. IMHO, they should all be tasered. It’d probably raise their IQs.

On a quasi-related note, the Taco Bell hot sauce packets that race around the field ( I know. Mucho lamo.) at MMP worked the taser incident into their act last night during the Astros/D-backs game. The hot sauce tasered the mild sauce in the middle of the ‘race.’

I saw a great (in an abusive sense) one on one of the “cop shows” a while back; dude was clearly drunk out of his goddamn mind, just got popped for DUI and is sitting on the ground behind the car *crying*. Cop demands that he stand up, then TASES him for not doing it fast enough, then shocks him a few more times when repeated demands to stand up aren’t followed.

Because, as we all know, it’s TOTALLY possible to stand up whilst every muscle in your body is being electrically contracted *and* you’re drunk.

There was also the transit cop a while back who was sitting on a guy and “accidentally” shot him in the back. The claim was “oh, I meant to grab my Taser” – my thought was, “you had him pinned down by three officers; WTF were you planning on doing with the Taser?”

@Capt Howdy: Although I’m happy to quote from it, you didn’t miss anything. It could have been a really funny take on local news, but instead it was, y’know, a Will Ferrell movie.

@JNOV: I have no idea what that means as I am emoticon-challenged, but I’m going on the assumption it was directed at me for stereotypical insults directed north of the Mason-Dixon line.

ETA: Just saw the change of avatar, which explains the “P” part, but not the series of punctuation.

@TJ/ Jamie Sommers /TJ: It’s a frowny face, but considering the abuse your neck of the woods is suffering, it’s not a real frowny face.

Remember when Santa Cruz, CA had that “riot”? Jr and I laughed — no one riots like we do. I think we’re also the only place that riots when we’re happy.

In other Philly news, off-duty cop kills someone over a Super Soaker. No, it didn’t look like a gun.

Oh, good FSM! Another Philly phucktard ran on the phield last night and phucked up the game.

Tom Betz, 34, tweeted and Facebooked “turn on the phillies game, im about to be on the feild!!!!!!!!!!” moments before he jumped the fence and ran around the outfield Tuesday night.

ADD: I gar-un-tee you that the next phool that pulls this stunt is going to get phucked up by the phans.

@JNOV: The rent-a-cop should have just chucked a battery at the dude’s head.

Have the Phillies improved since losing all those games on the road last week out here in Ess Eff? ;-P

And WTF? Massachusetts school for the disabled is using electroshock book bags to shock students? http://rawstory.com/rs/2010/0504/rights-group-files-urgent-appeal-alleging-torture-school-disabled/ What?

Watching the local news right now. So many people are getting all bent out of shape about the Suns wearing their Los Suns jerseys tonight, I’m thinking about following the NBA now. These threats by Sun Lakes and Mesassholes to boycott are only making the Suns look more attractive to me.

@TJ/ Jamie Sommers /TJ: I love that the Suns are doing that. My “Do I look illegal” shirt should be here soon.

I miss the old days, when a bobby’s night stick was sufficient to do the job.

@redmanlaw: Metaphor appreciated. Bob Clemente was inarguably the greatest right fielder evah, and possibly the greatest all round Sport in the game. He didn’t just have a rifle for an arm, he had a shoulder mounted scope, as well.

Whatever happened to Morgana, the kissing bandit, noone ever tazed her.

@JNOV: Oh, that Massachusetts school is old news – I know people who have been trying to shut it down for five years.

@TJ/ Jamie Sommers /TJ: It’s killing me. You know I’m cheering for my Spurs, but damn, I love Los Suns. San Antonio should have made jerseys that said “Los Espures” (Spanglish) or “Las Espuelas” (Spanish).

There’s a campaign afoot to have all of the Giants wear “Gigantes” jerseys when they play the Diamondbacks – the Gigantes jerseys are pretty popular swag at the games, up there with the Hebrew version of Giants on the jerseys and the panda hats for Pablo Sandoval.

@Nabisco: Best arm I ever saw, but Willie Mays was the best player. Cf his throw after the famous over-the-shoulder catch.

@SanFranLefty: There are “Los Spurs” jerseys. They wore them on Spanglish Latino night earlier in the season.

@TJ/ Jamie Sommers /TJ: OMFG, I am so looking for them now. And Spanglish night is every night in the Alamo City, even a Houston girl like you would know that…

I lurve Mays – and his genial sitdown with Jon Stewart was a real treat – but these are catches, throws and gazelle-like majesty. Plus, Clemente must have endured three players’ worth of derision for his being both black and Hispanic.

@Dodgerblue y Nabisco: Shame about how the Dodgers are choking this season.

/ducking as she’s certain that stoner pot-head pitcher Timmmay Licencum and Pablo “panda” Sandoval will break the hearts of all Gigantes fans by late July…and let’s not even talk about Zito because it’ll make him pull a muscle.

@Promnight: ESPN asked Bobby Valentine about that tonight. He said Morgana never went after him when he was playing, but that they had to deal with streakers back then. Assholes running on the field do disrupt the flow of the game, he said.

@TJ/ Jamie Sommers /TJ: Some people are reporting a “buycott” in which right wing fucks from around the country are seeking out AZ goods on the web to dump some reichmarks on them in support of repression.

@al2o3cr: My buddy owned an apartment building in the part of Albuquerque called “the war zone” that you may have seen on “Cops.” We used to call him a slumlord.

@SanFranLefty: Yes, our bullpen reminds me of BP in the Gulf, setting our own oil on fire.

@JNOV: Let’s hope appealing to the UN results in getting this place closed and the perpetrators put away.