Stinque
Home Latest Comments Log in
If it smells, we’re on it.
Stinque
Mastodon: @stinque@mas.to
Carpocalypse 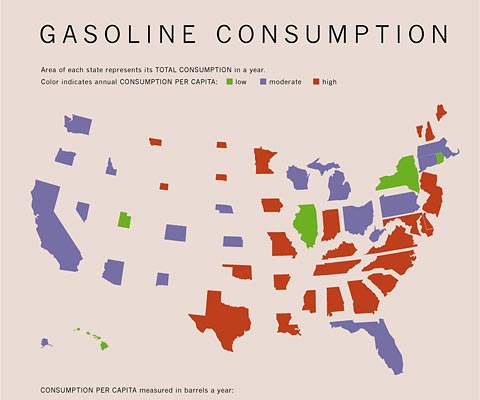 Gasoline consumption per capita by state, 2008. The baseline appears to be nine barrels per person for “low” states; “high” states count as eleven barrels or more.

It’s a fair criticism to argue that the range of consumption in play is less than the labels suggest, with just two barrels between green and red — although it’s just as fair to argue that the red states consume 22 percent more gas per person than the green states.

But what really catches our attention is this: California isn’t the hands-down winner in the gas derby?

How Much Gas Does Your State Use Per Person? [Infrastructurist, including full map, via Sully]

Come on feel the Illinoise!!!!!

Georgia’s place among the red states in this diagram probably deals with the fact that many of my Atlanta compatriots live like 40 miles from their jobs so that they don’t have to live near the Browns or the Poors.

really
that was a bit of a surprise.

I call bullshit. There is no way Arizona is a moderate state. The only people who don’t drive everywhere are college freshmen.

@redmanlaw: Wait — there’s not a Wal-Mart within a 30-minute drive of every human being on the planet?!!!

You just forced me to re-consider my entire worldview.

Also: WTF is up with Utah? Vast open spaces…it’s not like they have some huge Amish community getting around via horse-and-buggy.

Wow … NY is low despite all the damn taxis … not bad.

@JNOV: Next time I find myself in Utah (it’s been inexplicably frequent the last couple of years) I am so going to see that.

@JNOV: I love wax museums. They are so wrong.

@mellbell: For some reason one of those wax Mormons reminded me of Gumby. (Sorry Gumby!)

@Nojo: “California isn’t the hands-down winner in the gas derby?”

Not to be too proud of my neck of the woods, but remember that Ess Eff is the most densely populated city west of the Mississippi (if not west of the Appalachian Mountains). When you consider that close to a million people use mass transit in the Bay Area every day, perhaps we are doing our part to drag down the LA, OC, “Inland Empire”, and Sandy Eggo drives. Plus it seems the distance traveled isn’t that far, it’s just that everything in SoCal is 45 minutes away whether it’s two miles or 20 or 40 miles away.

@JNOV: @mellbell: @PedonatorUSA: OMG I saw that first one in person back in January. The Great Platte River Road Archway is friggin amazing in a horrifying, middle-America, wax-museum kinda way.

@SanFranLefty: Granted, but doesn’t the Palo Alto or Napa commute count for something?

@SanFranLefty, @nojo: Not to mention the horrors they must suffer in the Greater Fresno and Bakersfield metropolitan areas.

And don’t forget the border-crossing waits; that’s almost all on the other side of the line, but some of that should be counted, I think.

@nojo: Shallow Alto is on CalTrain – there’s no reason for you to drive to/from there from anywhere between Morgan Hill and Ess Eff. And the Peninsula has pretty good mass transit buses. Plus if you work for most of the tech companies, they have private buses that pick up folks every 30 minutes 24/7 on a few corners in SF (including at the Castro Safeway) and then take them down to the tech farms.

Napa – well, how many people really live there and commute to the City? The biggest problem is the fools who live in Tracy/Madera/Modesto and commute to jobs in the East Bay (Livermore/Pleasanton/Fremont). 580 West is a clusterfuck in the mornings, and vice versa in the evenings. There are ACE trains that connect with BART, but it’s not enough.

@mellbell: Well, you’d be absolutely floored by RoadsideAmerica. It is wrong in a gazillion ways, not least of which is the flag-draped Jeebus projected on the screen while they pipe God Bless America into the ‘display’. Even my kids think it is stoopid, but like their dad, will probably return when they discover dope irony.