Stinque
Home Latest Comments Log in
If it smells, we’re on it.
Stinque
Mastodon: @stinque@mas.to
Big Shitpile, Foreign Correspondent, It Hurts When I Do This 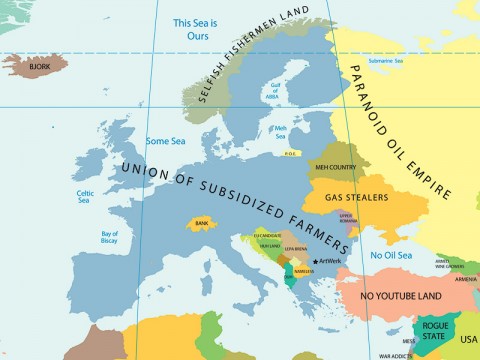 Your favorite foreign correspondent has taken time out of her busy wine-drinking schedule to report on a bunch of fuckery happening presently:

Berlusconi, class clown, made fun of the lefty governor of the Piemonte region: “You know why Bresso is always in a bad mood? Because in the morning when she gets up, she looks at herself in the mirror to put her make-up on – and sees herself. And so her day is already ruined.”

Her reply? “I’m always in a good mood. And regarding make up, I don’t use much; I don’t need it as much as Berlusconi. I’m young, in good shape and haven’t had a facelift.”

Oh, snap! The emperor might not be completely naked yet, but he’s definitely showing some leg. It doesn’t help that Berlusca’s party failed to register its candidates on time because the designated official was at lunch.

Berlusca also recently appeared in public flanked by 12 administrators and declared his follwers to be missionaries. And the batshit-crazy right Lega Nord party handed out anti-immigrant soap, to wash one’s hands in case one came in contact with an immigrant. Stay classy, Italy!

Pope Ratzi apparently sanctioned kiddie-diddling on five continents. And in possibly related news, Chief exorcist Father Gabriele Amorth says the devil is loose in the Vatican and roaming the halls.

Sarkozy got spanked by the left in last Sunday’s elections, which left Socialists in control of 23 of France’s 26 regions. Protests, teargas, blah blah blah. There’s no pleasing these fucking people.

A dozen French winemakers and traders were found guilty of a massive scam to sell 18 million bottles of shite Pinot Noir to a leading US buyer. Their defense: “Not a single American consumer complained.”

Holy shit, are they broke. But they insist that if Germany and France throw them a safety net, they can row themselves ashore. Upside? This whole kerfuffle is making the dollar soar against the euro, which means my rent is cheaper. Oh, and more tourists or something.

Political headline, or quote from a James Ellroy novel? You decide.

A dozen French winemakers and traders were found guilty of a massive scam ..

They are still pissed about the events depicted in Bottle Shock.

Thanks for the map and the alt-text that enabled me to search out a larger version of it so I could read all the smaller labels on it.

Re Father Amorth’s assertion that the Devil is in the Vatican: Perhaps he wears Prada [slippers, the red ones].

@lynnlightfoot: Yeah, sorry I couldn’t make it bigger for you. (That’s what…)

Amorth’s description of the devil was similar to the Smoke Monster in LOST. Who knew he was a fan?

@RomeGirl: A slightly larger version is here. (I know nothing about how WordPress works, but there you go.)

@mellbell: The version I uploaded is bigger, but I couldn’t link it to it for some reason. THE INTERNETS ARE MYSTERIOUS sometimes.

It’s comforting to know that craziness is ubiquitous.

@SanFranLefty: Ha! Was it Red Biciclette??

@Dodgerblue: Right? The US is almost starting to look sane again. Almost.

@RomeGirl: I think I’ve had the TJ Red Biciclette. Bleah.

Who is that guy, and why is he calling me “Darling”?

@RomeGirl: Ummm, yes, that was one of them.

@Tommmcatt Loves The Giant Floating Head: I dunno, but wouldn’t you love for that to be on a Post-It on your bathroom mirror in the morning after he’s left for work?

@lynnlightfoot: @RomeGirl: @mellbell: Let’s tidy up the link to the embiggened version — should be direct from the graphic now.

Not sure how you do that from the WP civvie interface — I always hand-code my stuff.

Related to the map discussion, some links:

The Tory Atlas of the World

Around the World at Twice the Speed of Fogg Who knew that $6k (in 2005) could get you around the world? Granted it takes 40 days, but that’s going on my “stuff to do someday” list.

Caution: the Strange Maps blog has been know to devour hours of time at a stretch. Consider yourselves warned. :)

/if ever an outfit necessitated shouting in all-caps, it’s that one. Please Nojo you’ve got to post a good pic of her outfit somewhere…or save it for a future Talibunny story.

@karen marie: There’s a poll on HuffPo about her jacket, did you vote?

@karen marie: @SanFranLefty: Well, if nobody runs with it later tonight, I have a few ideas for the morning. Right now I’m still enjoying the map.

No, I didn’t see that. But I can’t vote. They didn’t include the option I would pick.

@karen marie: Well, my choice would be “Lose Her”

@karen marie: And her hair? WTF is going on with Talibunny’s hair? Every appearance it seems to be getting bigger and more Snooki-fied.

TJ/ favorite line so far from the memo I’m writing: “If [the client, a tribal health care center operating under contract with DHHS] has retained a medicine man to perform a full ceremony . . . ”

Issue: whether a medicine man performing services under contract with the the client would have coverage under the Federal Tort Claims Act.

ADD: Wow. Congress expressly disclaimed any liability from any death or injury arising from the provision of any traditional health care practices in the reauthorization of the Indian health Care Improvement Act that became law on Tuesday part part of HCR. So if you had a tort claim against a medicine man working for your local Indian health clinic, you had to have filed your claims before last Tuesday. I guess that would be true for any claims still elibile to be filed under FTCA’s two year filing window.

@karen marie, @SanFranLefty: And WTF is it with pockets positioned on top of boobs? Hilary was sporting some with flaps in a pic from the other night. Am I the only one that finds titty pockets disturbing?

@Pedonator: No, you’re not the only one. As a woman who doesn’t carry a purse and buys clothes based upon the utility of their pockets, I go nuts when I see useless titty-pockets.

TJ: Quote of the Day, courtesy of Sen. John Ensign:

“Whether it’s Republican or Democrat, it’s about nailing somebody,” Ensign said.

@SanFranLefty: I need to see the shoes.

“Darling, we will cut deeper than Thatcher” sounds like the final threat one might hear outside a Soho nightclub.

It’s almost as good as her infamous Imperial death smock.

That still can’t top the Vader outfit. I swear I’ve seen a shot from that day where she has the black leather gloves on as well, but can’t find a link.

Totally unrelated: Fracking. No BSG fan could read this press release without giggling.

@Mistress Cynica: So your eyes can bleed? Why torture yourself?

@SanFranLefty: Mark Halperin is talking about how she “bonds with her base” and I’m thinking, “yeah, strapped to her base is more like it. “Whipping the crowd into a frenzy” takes on new meaning.

Just back from 3rd world. So sweet. In London they have clockwork tellys. They wind them up and then boring people appear and sit on red sofas to talk to other boring people about the weather. And outside on the street they walk about holding empty spaghetti tins against their ears pretending to be talking on their ‘mobiles’. Or they bray at each other in wine bars. Speaking of which I absolutely cannot drink any more champagne no matter how much I’m begged. Anyhoo, glad to be back in civilization. They find out you’re American and they follow you about trying to marry you.

He’s not even trying any more. Dude should just resign and go make another movie.

@SanFranLefty: Darling, if he could make another movie do you think he would be governor?

@SanFranLefty: That’s why I needed to know. At least fuck-me boots would have made some kind of sense, while the clunky pumps and plain black skirt just look like someone photoshopped her top and bottom halves together. She can’t even get dressing tacky right.

@SanFranLefty: Have you noticed that since that advisor/spokeswoman she had, the one we all laughed at for being so inept, since she quit, Palin has been looking stupider, and saying stupider shit?

But this seems to speak to an ego nearing meltdown, she was so bad, back when she had even bad advisors, now she feels confident enough to refuse all advice, and “be Sarah,” and its getting worse and worse.

@redmanlaw: I didn’t even know you could file suit against the feds for traditional health care practices. It’s a weird feeling to know that there was a right you didn’t need that’s recently been taken away.

@TJ/ Jamie Sommers /TJ: You are a lawyer, aren’t you? Its our fault, there is a lawyer pushing the furthest boundaries of blame, everywhere, its making our society so straightjacketed.

@Promnight: Or better and better.

@TJ/ Jamie Sommers /TJ: That was my conclusion, so long as the traditional healing was done by a medicine man working for a tribal health care facility carrying out federal health care programs for Indians under a Pub.L. 93-638 contract with DHHS.

@Promnight: Have you noticed that since that advisor/spokeswoman she had, the one we all laughed at for being so inept, since she quit, Palin has been looking stupider, and saying stupider shit?

Really — I was expecting her Facebook page to descend into the postmodern marvel of her Twitter feed. But she still manages, like, sentences and paragraphs and shit.

@nojo: “I went into the room and called Susie. ‘How’s it going?’ she said. I told her about the helicopter blonde and the girl entering the room. ‘I guess ‘shit’ is hyperbole for these kids,’ I said. ‘I mean, the blonde didn’t mean, ‘Eat breakfast and then shit.’ She meant, ‘Eat breakfast and stuff.” Susie listened to my insane raving without saying a word. Finally, I said, ‘And what are you gonna do today?’ She said, ‘I’m going to the grocery store to buy food and shit.’

Deadspin at Spring Break – “Down and Out in Daytona, Pt. 3”

On Go Fug Yourself they call such a blessed outfit a “Scroll Down.” Starts out so far, so good from the top, then goes down hill fast when you see the rest.

like someone photoshopped her top and bottom halves together

@Original Andrew: I think SarPal has re-defined it as the “View Page Source”. You’re just dying to right-click in order to see what the coding looks like for the batshit going on inside her head.

Nancy got the flowers you sent and says “thanks!”

OMG! Did you see this?

@Tommmcatt Loves The Giant Floating Head: Who is that guy, and why is he calling me “Darling”?