Stinque
Home Latest Comments Log in
If it smells, we’re on it.
Stinque
This is America.
Socially Acceptable Nationalism, Sport

Day Seventeen — Out With A Bang

Two — and only two — events on the docket.  There’s the men’s 50k in cross-country.  There may be a debate about who the fittest men on the planet are — competitive swimmers and water polo players, marathoners, triathaloners, etc.  But these guys are in the conversation.  It’s somewhat of a pity, however, that watching XC on the teevee is like watching paint dry.  The exception to this, however, is the last three or four kilometers, in which there is invariably three or four guys making a mad dash for the line, together.  So something to scan through at least. 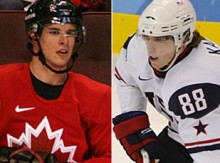 And then there’s the hockey game.  Canada has always played on the edge of total disaster (losing 5:3 a week ago to the U.S. Americans, damn near blowing a 3:0 lead against Slovakia in the semis.)  If anything, this has juiced the game this afternoon — 1500 ET on the Mothership, live to all time zones (including perhaps Hawaii)– up north.  And God knows NBC has pimped this game relentlessly in the last 48 hours.

For Team USA-USA-USA, Patrick Kane had himself a breakout performance against the Finns on Friday.  (This, to be honest, is not totally impressive — I could have had a breakout performance, the way Kippy was playing in net.)  He hadn’t had a good performance before then.  So he may be peaking at the right time.  Also watch Zach Parise and Brian Rafalski — who have been having a whale of a tournament.  And then there’s Ryan Miller, who’s stood on his head for the last two weeks (a .954% save percentage, and a 1.04 goals-against average — that’s a pretty damned good run).

Should be a hell of a game.  I will be splitting time between here and the commentary playpen/game-thread on the Blackhawks’ fan blog, Second City Hockey (d/b/a Sec 326 Bureau Chief).  Join me there, and here.  (Forgive the slow-speed on Second City Hockey — there’ll probably be over 700 comments unless they break the thread into periods.)

Full analysis of everything tomorrow.  Enjoy the game — seriously, it is Appointment TV.

NBC got lazy last night and just repeated its prime time coverage after SNL, so I got to see Bode Miller’s seven second slalom run (not even long enough for bull riding) and the Amazonian Lindsey Vonn chat with the elfin Bob Costas. Seriously, that chick is huge. Some women recreational racers I rode the lift with yesterday did not care for Vonn and what they considered her ditsy post-gold DH run interview and were Team Mancusco all the way “because she seems smarter.”

I am going to miss the Olympics. I guess I’ll follow the World Cup over at skifaster.com and work at getting better myself to the extent I can with my old guy knee. (Son of RML is still wiped out and went back to bed after church.) Great coverage here at le stinque.

The No. 10 URML Lobos beat the vile BYU Cougars yesterday by 3 in the closing seconds of the game, btw, which vaults the place that slipped me two diplomas into the lead for the Mountain West conference and a for sure NCAA bid. Neu Mexico always goes out by the second round, so we’ll see . . .

Basketball tournament weather today. Grey, cold, spitting snow, but no wind. I hoarded some firewood so I might take the chill off the house today.

CB is correct – cross country is painful to watch. I await the hockey.

“Cross-country exists as a part of Sport, and is happening right now.” I have talent, I must say. (But, seriously folks: thanx.)

@chicago bureau: OK – watching the skiing w/ the sound off, and they all just changed their skis. What gives?

There may be a debate about who the fittest men on the planet are — competitive swimmers and water polo players, marathoners, triathaloners, etc.

I should think the men in the ABT corps de ballet would give them a run for their money.

@blogenfreude: New rule — wax wears off after a while, so they are allowed three pit stops to get fresh skis.

Meanwhile — what a finish. 50k race comes down to a matter of feet. Unreal.

@chicago bureau: That Norwegian guy just upped his game right at the end … it’s how you medal. Amazing.

Notable in re hockey: the USA-USA-USA coach is Ron Wilson. The GM of the team (responsible for selections) is Brian Burke. Both serve in those same roles for the Toronto Maple Leafs — who have reached impossible levels of suck in recent years. They must be losing their minds over all of this. And if U.S. Americans win? I don’t even want to think about it.

Question. I don’t know much about hockey. Is Olympic hockey less rough than the NHL?

@blogenfreude: Blackhawks season ticket holder. Toews is absolutely awesome — outworks everybody on the ice. But he’s on the wrong team today.

@Benedick: I remember a study done 10 or 15 yrs ago that rated the fittest all-around athletes as boxers and ballet dancers. The other thing about dancers: they cannot show that they’re expending any effort whatsoever. No grunting, no gasping for breath, always in total control.

Also neural block is wearing off so it is starting to hurt when I move, but not as bad as bloating up from intestinal gas but I managed to deal with some of that this morning.

I really do hate those “How do you feel?” question on the losing side. Duh.

@chicago bureau:
I don’t get that either. Only Leaf playing is Kessel for US America.

ManchuCandidate: With that in mind — I am SO SORRY you have to deal with Pierre McGuire between the benches. We have to do so during NBC’s game-of-the-week coverage. He is insufferable — and so far along Sidney Crosby’s manhood that he’s gagging.

@Mistress Cynica: Plus there’s less of the gloating. Plus they have to hoist women and walk about making them look weightless while wearing a dance belt. Plus they get paid shit for a life of dedication that oafs-on-ice could not begin to comprehend. Apart from that, carry on.

I also read a study some years back that found the highest levels of aggression and testosterone to be in actors. Is it showing?

@ManchuCandidate: They charged you? They know who you are – the four-years-with-appendicitis guy? And morphine. All the morphine are belong to you. Or dilaudid, ideally, a very nice pain killer indeed. All the dilaudid are belong to you. Great stuff. Low residue compound that probably causes less trouble than morphine.

Eight minutes left — still CAN 2:1 USA. Tension all around the arena.

TIED! Zach Parise with the extra attacker! CAN 2:2 USA!

Victory Rubbers for the Canucks!

Goes back to sleep

@FlyingChainSaw: Dilaudid, thats either oxymorphone, or hydromorphone, I have the other for my back, trade name is Opana. Good very good stuff.

@Dodgerblue: Moosehead, along with Strohs, one of the beers we thought were rare and extra good, in college. Coors was another one, because it could not yet be had, in the East. Coors is actually not a bad american light lager, but so was Miller High Life, back in the day, now, Miller and Bud are all sweet, watery, near hop-less. I guess thats why I will still drink a Labatts Blue, thats about what American premium lagers were like in the 70s.

@Promnight: Try the Molson Export Ale with the red label.