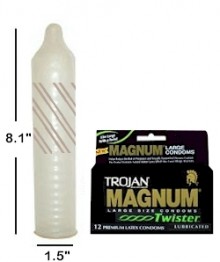 From a few days ago – and,  we ask you, how else are they going to stay warm?

Rowdy curling crowds; spontaneous street parties; public drunkeness. You don’t have to look far for evidence that the crowds at Winter Games in Vancouver know how to have a good time.

And, as if anymore proof is needed that a wild Olympic atmosphere permeates B.C.’s largest city, now there’s an apparent condom shortage.

That’s right. As you read this, an emergency shipment of condoms is desperately making its way across Canada to the West Coast city.

And you thought Canada was boring …

Health officials in Vancouver have already provided 100,000 free condoms to the roughly 7,000 ahtletes and officials at the Games. That’s about 14 condoms per person. But as of Wednesday, those supplies started running dangerously low.

So naturally, the Canadian Foundation for AIDS research decided to step and make sure there were no hitches in Olympic action.

The Bush Administration would have sent abstinence pamphlets.

Trojan Magnum Twister? For when “sit on it and spin” becomes a reality?

@Dodgerblue: I looked for the most bizarre condom … decided against those w/ fringe, or the glow-in-the-dark condoms.

blogenfreude: I already noted, in December, the most bizzare condom.

Even funnier that this appears directly above “out with a bang”… ;)

I see they’re only selling the small size. That would make sense given that it’s Canada. Personally I favor The Emperor.

This is only good for finger fucking. The Hefty people make a lawn condom for fucking outside and a contractor condom for tradesmen, I guess. The 55-gal models are a little snug but come with a twist tie for neat disposal.

How much acid did the Canadian choreographers drop when they planned this out?

Did I take some of Manchu’s meds? Inflatable beavers? This is like a Christopher Guest version of the Olympics.

Ya see? Wasn’t that the weirdest thing you’ve ever seen on TV?

@SanFranLefty: BTW, “Long May You Run” is a song about a car.

@Benedick: I have the strangest story about an indigo bunting, its the only time I ever saw one. I was driving along Skyline Drive in Shenandoah National Park, on my little Honda Civic, and I hit a little bird that swooped right in front of the car. But I did not see the bird fall or fly away, and I stopped, and as I suspected, the bird went right in one of the grill openings and was back there in the space between the grill and the radiator, looking just fine and staring out at me. I opened the hood and it hopped up, stood for just one second in its indigo glory, really amazing from just a foot away, and then flew off, none the worse.

I always regard close encounters with birds, such as this one, as omens. I think that one meant that “the bluebird of happiness is flying away from your ass as fast as it can, and won’t be back, if it can help avoiding any more accidental encounters.”

@Dodgerblue: Ah, you bring back a memory. I was a young oaf of 20, it was the summer of 82, Isreal was destroying Lebanon and massacring civilians in refugee camps, Reagan stalked the land, rampaging and pillaging, I was a clueless college student, working for the summer in a seafood restaurant in Delaware. She was a waitress, tall and lithe and blonde and lovely, and funny, and charming, and I was somehow inexplicably excellent in her presence, in that I won the restaurant after-hours arm wrestling championship, defeating a burly ex-con (really) whose nickname was “Bull,” and she asked if I would go with her to ther local hangout for a beer afterwards, in the wonderful days when the drinking age was 18, and then, well, she came back to my place, and, well, umm, well, she sat on it and spun.

I was and never will be, mind you, someone for whom such an encounter is common or expected. In fact, it was as rare as hitting that indigo bunting with my car. So, I think that amazing personal encounter was also an omen, and its meaning is also now clear: it meant “this is the last fucking time anything this fucking amazing will ever happen to you, loser.”

I feel bad for straight people. That kinda thing happened all the time for me, sometimes twice a weekend if I felt like it.

@Prommie: But what an experience!

@Prommie: I was just in the hardware store talking to the nice lady and turns out I did not see an indigo bunting, which are very scarce here if they come at all, what I did see were bluebirds which overwintered this year as it’s been so warm. A thrill nonetheless.

Your radiator story made me think of catching a hummingbird that had strayed inside and carrying it outside to let it go. As my hand closed on it the bird became absolutely still, apart from its heart beating.

Oh, and we’re smarter than they are.

@Tommmcatt Say Relax: Left-handedness, asthma and homosexuality are known to be associated, in a group, with artistic genius. This explains why my drawing ability has not progressed beyond the stick-figure stage.

@redmanlaw: Nobody dicks around on budget and tax issues like the Arizona legislature. Why work on fixing the budge deficit when you can work on sticking it to the illegals?

@TJ/ Jamie Sommers /TJ: I saw where some Arizona Dem wants to institute a “proof of citizenship” requirement for private firearms sales. Read as: “no guns for brown people”.

@Dodgerblue: I’ve got two out of three of those working in my favor, but I could have told you that being straight makes me stoopid.

@Tommcatt: My favorite part of that article is this: The data should not be used to stereotype or make assumptions about people, experts say.
Uh huh. right.

@Tommmcatt Say Relax: … the data should not be used to stereotype or make assumptions about people, experts say. Then what the hell is it good for?

@redmanlaw: Yeah, that’s one of the pet projects of a state senator named Russell Pearce, who is obsessed with illegals. That bill is in some weird limbo right now because a Dem managed to get an amendment tacked on that he didn’t like.