Stinque
Home Latest Comments Log in
If it smells, we’re on it.
Stinque
Assholes, they do vex us.
Socially Acceptable Nationalism, Sport 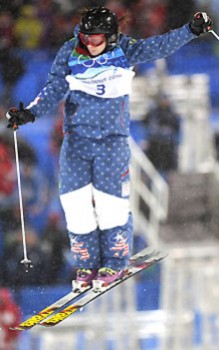 The early leader for “Storyline Bob Costas Is Beating To Death” is the whole “no golds for Canada in Olympics held on home soil” deal.  Apart from the fact that home soil is not normally touched in the Winter Olympics unless the snow melts (that’s in the mail for sure, on recent evidence), Canada’s done just fine.  At Torino, they nabbed 7 golds, and 24 overall — good for fifth.

One of those went to Jennifer Heil in moguls.  Ah, but looky here! Hannah Kearney (right) of Norwich, Vt. — Vermont, bitches! — beat out Heil to take U.S. America’s first super-duper shiny object.  Two things about the moguls — (1) my knees hurt just watching that, and (2) you can’t tell the difference between one run and another.  In that regard, it’s like figure skating without spandex, and with more stoners.

Anyway: Canada’s not starving for gold.  Tone it down, Bob.  (And that’s a general instruction, Bob, applicable to all things.)

Briefly: USA hockey (wimmin) draw China to open their run this afternoon (basic cable).  Mothership has more luge (safer than advertised, thank God).  Also: nordic combined has, in a shock, a dark horse American in the mix, and the fellas take to the bumps.  And ice pairs, for those into spandex.

Actually, according to the ultra annoying CTV olympic commercials, we are.

Lots of pressure, too. Again from the boneheads at the Canada City Olympic Committee and from C “we just took a fucking bath buying these rights” TV.

It’s just another day in the happy village of the international MSM.

In events that matter, dark horse Anastazia Kuzmina, a Russian who jumped ship to compete for Slovokia, won the wimminz 7.5 km sprint biathalon, winning Pottsylvania’s first gold ever of any kind in the Winter Games. Kuzmina, who was ranked 28th in the world, thoroughly kicked the ass of the Swedish favorite, who was last seen asking herself “what the fuck happened so that I lost to Boris or what ever the fuck her name is and came in 12th. ” A German named for a mid-day sex break, Neuner, came in second. Marie Dorin of France, a nation absolutely no one associates with either Nordic skiing or shooting, won the bronze.

@redmanlaw: Curling would be more fun to watch if the competitors carried rifles.

I turn on the radio for some morning tunes and shriek in horror because it’s too early for a fucking radio campaign ad by Meg Whitman!!1!!!

@redmanlaw: I’m surprised about all the dark horses this year. I thought they didn’t like snow, and couldn’t swim or some such shit.

Suck on that Bob Costas, you annoying motherfucker!

@ManchuCandidate: My boy Dan Patrick sure looked like a dork in that hat, eh? And what’s this? US Americans medaling in Nordic skiing? When’s the last time that happened? Bill Koch in 1976?

@redmanlaw: Usually root for Norway, Netherlands, or France … or Japan when I’m under surveillance … we have no business winning winter Olympics,