The World According to Galt 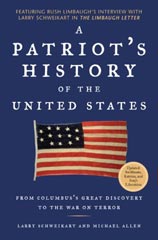 Title: “A Patriot’s History of the United States: From Columbus’s Great Discovery to the War on Terror”

Blurb: “For the past three decades, many history professors have allowed their biases to distort the way America’s past is taught. These intellectuals have searched for instances of racism, sexism, and bigotry in our history while downplaying the greatness of America’s patriots and the achievements of ‘dead white men.’

“As a result, more emphasis is placed on Harriet Tubman than on George Washington; more about the internment of Japanese Americans during World War II than about D-Day or Iwo Jima; more on the dangers we faced from Joseph McCarthy than those we faced from Josef Stalin.”

Review: “This book has taught me more about our history than any I’ve read in years.” (Glenn Beck)

Footnote: For the first time since we’ve been keeping track, the top Amazon bestseller is not sold by Amazon. For that matter, the hardcover was published in 2004, and the paperback in 2007.

Oh, and Glenn Beck pitched it on the air last Monday.

A Patriot’s History of the United States [Amazon]

As an avid reader of history, I really get pissed off reading propaganda disguised as history (Stephen Ambrose, I’m looking at you!) No nation is immune from it’s own mistakes (see Vancouver 2010) but hiding from it is utter crap.

What’s lost among shitheads like this is that all the “good” stuff has been done and the new history books focus on those whose stories have been largely ignored (usually the little people at the sharp end of the stick.)

Why do I pick on Stephen Ambrose? He writes about a lot of stuff I should be interested about (WW2) but he conveniently ignores a lot of things for flag waving purposes. Like the ineptitude of much of the US Military High Command especially when compared to the Germans or the fact that the citizen soldiers paid a huge price against the well trained professional army of Nazi Germany (2:1 casualty ratio.) Even in Band Of Brothers, he fails to point out that 101st Airborne’s 506 Regiment, Easy Company stood out because it was as well trained and had excellent leadership like a normal Wehrmacht Airborne Infantry unit. This is nothing to take away from the bravery and individual skill of the citizen soldier, but the US Army of WW2 was really the equivalent of a junior high school football team playing against an NFL team. Not mentioned in the chorus of “USA! USA!! USA!!!!!”

This is so depressing.

@Mistress Cynica: Mainlining exceptionalism will do that to you.

@ManchuCandidate: It’ll probably take at least another generation for the dust to settle, but word’s starting to leak out that without the Russkies providing distracting cannon fodder, the Allies would have long since been toast. Surely twenty million deaths must count for something.

@nojo:
The USSR’s role was extremely important. They kept the bulk of the German Army occupied.

Also the Bomber Campaign kept the Germans tied down (although not to the extent the Russians did.)

If the war was extended, say 10 months, the first city to be nuked would have been Berlin and not Hiroshima.

This iPhone is too fucking cool!

I am still trying to decide whether to get Droid on my verizon acct.

@blogenfreude: Got the $99 model. LOVE IT! Stinque looks great on it. Bye bye, Blackberry, bye bye!

If I didn’t fuck it up when shopping on-line, I just bought another dehumidifier with the Stinque kicque back linque….hopefully March’s server action will be brought to you courtesy of the insane El Nino invasion of mold in my house. Mr. SFL have spent the past two days of waking hours fighting mold in our 600 square foot abode…and having mold nightmares when we’re not awake. Oh, and I’ve inhaled so many spores of mold that I’m afraid of what it’s doing to my insides, judging by my near-constant sneezing. Curses to El Nino, go send your rain and snow to Vancouver… though we keep reminding ourselves that all this NorCal rain and snow means we may finally have a good salmon season here again…

@SanFranLefty: The former Eugene Batcave was called the Mildew Palace by unkind friends.

@nojo: I’m paranoid now – I think every scuff mark on a door or wall is mold. And then I discovered the overwhelming musty smell in my car was caused by stagnant water and mold where the spare wheel is stored in the trunk. So my mold paranoia now encompasses the car.

i am crossed eye furious at the bobblehead with the microphone last night, who said re dead luger:
“well, (with a big smile) it did put a damper on things for a day or two, but we’re back in the swing”
damper?
DAMPER???
that unfortunate guy was a person, you freak.
i fucking hate every thing about the olympics.

and i left something out the other day when i was wondering which olympics would medal in the dead people category: atlanta.

i hate the olympics. it’s such bullshit. “competing now is vladimir schwartz and babs snorkel skating to requiem for a funeral. they live in texas and are coached by svetlana badinoff, a russian living in usamerica for 40 years.”

just realized this is on the wrong thread :P