Stinque
Home Latest Comments Log in
If it smells, we’re on it.
Stinque
Cassandra was right.
Howard Beale Presents 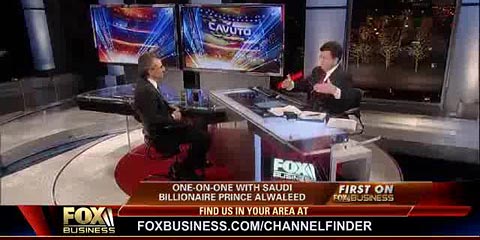 Okay, our headline’s getting ahead of the story, but that 7 percent ownership of Rupert Murdoch’s News Corp by a Saudi prince has not passed without notice:

FARAH: There’s a flaw, a real compromise in Fox that you need to understand. And if you care about national security, you especially need to be attentive to it. And that is that Fox News parent company is News Corp has a significant ownership by a Saudi prince that many of you will be familiar with because right after 9/11 this prince very famously offered Rudolph Giuliani a big multi-million dollar check to rebuild and Giuliani told him to stick the check where the sun don’t shine because this guy was basically blaming America for what happened on 9/11. Well this guy owns a very significant percentage of the News Corp and has let the world know that he can get things taken off Fox News when he finds them objectionable and has in the past. And I really believe this is really dangerous for America.

That would be Joseph Farah, proprietor of our beloved WorldNetDaily, speaking in St. Louis over the weekend. (Farah also had a star turn at the teabagger convention — busy dude.)

It’s important to note that Farah likes to keep a little distance from Fox News — they’re too liberal for him — so for him, making a stink about the ownership isn’t a major stretch. More interesting is that the ThinkProgress correspondent on the scene (allow for wishful thinking) “observed attendees of the conference murmuring and shaking their heads in disapproval.”

Have the seeds of doubt been planted? Will the Fox Jazeera meme spread? Still too soon to tell. But WND jumped on the original story in December, and they’re quite capable of making a crusade of it if they want to.

Popcorn? If WND decides that Fox News is on the commie list we’ll need champagne.

These are the opening strains of the Conservative Schism Teabag Symphony, my love…

@Tommmcatt Say Relax:
nah
a few “contributions” here and there and all will be forgiven