Stinque
Home Latest Comments Log in
If it smells, we’re on it.
Stinque
Cassandra was right.
Talibunny 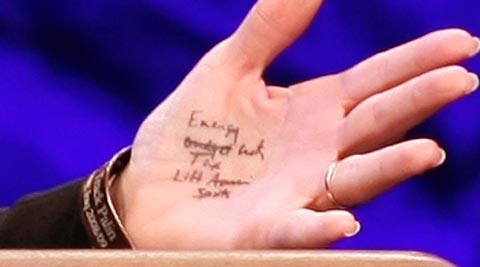 Eric Robinson, a veteran of both Iraq and Afghanistan, notices something that caught our attention Sunday — but unlike us, he sees the significance:

The name on her black memorial bracelet — one, like the gold star, a demonstration of a friend or associate who was killed in action — is that of her oldest son, Track. Track served honorably in Iraq, and both he and his parents should be thanked for his selfless service to his country. He is also alive.

Commemorating Track’s service by wearing a a black memorial bracelet which is reserved for those dead or even a red bracelet for those missing in action, demonstrates a horrifying contempt for those who gave their last full measure of devotion or an almost unbelievable ignorance of the importance of symbols in American history.

They don’t make politicians like him anymore. Truly one of a kind. His campaign ads are still some of the most spectacular things I’ve ever seen in turning a negative slur into a positive. I’ll go look to dig something up.

ADD: Can’t seem to find them right now on the You Tubez, but one was of him throwing his AK-47 in a river in gun-loving East Texas to show how truly committed he was to fighting communists. Another was him visiting an old folks home while the voice over of the old lady said something like “We’ve all heard the stories that our little Charlie likes to have a good time up in Washington. Well, he’s making sure I get my Social Security…” then there’s a cut away to Charlie and an old lady standing up, and beginning to dance, and the voice over concludes, “But Charlie remembers where he comes from, and like we say, you always got to dance with the one who brought you.”

@SanFranLefty:
too bad. seems like the lived fully. the scenes of his “office workers” in that Hanks movie were just great.

@Capt Howdy: They were known as Charlie’s Angels. Classic line attributed to both Charlie and LBJ: “You can teach them to type, but you can’t teach them to grow tits.”

He and Pat Schroeder wound up becoming good friends despite the “babycakes” comment.

@Capt Howdy: Damn, but no throwing the AK-47 in the NechesTrinity River clip.

One of Molly Ivins’ books has a profile of Charlie. This is a good Charlie story in her book:

Wilson liked gadabouting in South America, and he stirred up his share of trouble along the way, to the point where his life was threatened by some politician or other. Wilson gave it no heed, but the threat made its way to his mother’s ears, and she panicked. After trying to reach him on the phone for a few days but failing – because he was off in South America again, of course – she finally called House Speaker Tip O’Neill. According to Wilson, the call he then got from O’Neill went like this: “I just spent an hour on the phone with your mother. I don’t HAVE an hour to spend on the phone with your mother. Get your ass back to Washington and stay there.”

@SanFranLefty:
Charlie Wilson’s War was actually pretty good. If he was as sharp as folks said he was (and the movie made him appear) then the major responsibility for the Afghanistan mess falls on the “not so fucked up” Bush admin/CIA bureaucracy for helping fuck up Afghanistan by making it a religious crusade and not doing anything to rebuild what the Sovs and Mujaheddin blew up.

@ManchuCandidate: Get the book. I highly recommend it. Better than the movie, which was pretty good.

@ManchuCandidate: Old timers on Central Asian desks at the CIA (and the alumni/ae diaspora) shrieked bloody blue murder when Reagan started arming the Mujaheddin. First instance I remember of old CIA people yelling at a sitting administration. Another case of the ideologues giving the professionals the finger.

@Capt Howdy: Christ, those photos are stark reminders of how horrifying that day was. I didn’t actually have a strong visual connection with 9/11, at least not initially, because I was working at a coffee shop with no TV and I didn’t see any of the images until I finished my shift and got home 6-7 hours after it happened. I had been listening to reports on the radio the whole time, though, so what I was imagining in my head was almost worse than what actually happened (i.e. I was imagining the towers toppling over still at their full height rather than collapsing in on themselves).

That’s a black bracelet. It looks copper from here. Anyhoo, I thought it was some sort of gold star mom thing. There’s a woman at my church who wears one for her son in Iraq.

@flippin eck:
that day I was in the middle of renovating a house I had bought in LA and that day was yard work. that morning for literally probably the only time in my adult life that I remember I did not turn on the tv.
any other morning I would have been glued to it. but I was on the west coast so I would probably have missed the main event anyway.
but sometime after lunch LA time a neighbor said something about it over the back fence and I went in and turned on the tv.

@Capt Howdy:
however apparently that is in dispute.
Link

@Capt Howdy: Post updated — I was also looking through some non-speech photos, and visually it depended on the light.

@FlyingChainSaw: Here’s a new B of A is the shit story for you.

@Capt Howdy: Do you notice in the picture on the right the Talibunny is seen pal’ing around with a woman who admitted to savagely pestorking a married US Senator, yes, and to this day immodestly thrusts her breasts in front of the media’s cameras in hope of destroying another family. In the presence of this enemy of the American family, the Talibunny smiles blithely while even the intellectually impaired Honest to God Retard Tripp howls his fearful protestations at the monster in his midst. Why, Talibunny, why do you hate the institution of marriage so much you would be seen in the same state as Barbara Walters?

@SanFranLefty: Yeah, this happened to a guy in Miami a few years ago and they did the same thing. The form letter to Bao is probably sent out a few hundred times of day, I am sure.

This was a hoot: “The bank recognized that the transfers were improbable, but didn’t stop them.” None of these transactions get any human attention. The fraud detection systems are a work in progress but even the guys who design them know they fall far below the level of kind of security protocols required for a telephone/fax mediated wire transfer. The criminal part is that any part of the old security protocols for circuit-switched media could be reanimated in an online system but the banks don’t bother because of the expense. Remember, B of A makes 45 for an international wire. You do it yourself, they make 40+ bucks for doing nothing. Someone has to send a fax to you with a keycode for you to call in to confirm you’ve requested a transfer would cost them $10 in employee time. Result: shove everyone at the web console with zero human mediation. If a fraudulent transfer is on a consumer account, we’ll cover it if they throw a lawyer at us. If it’s on a commercial account, we’ll send them this letter – at a cost of $2.20 in time and materials.

@SanFranLefty: Almost five years ago, Mr Cyn wrote a check for his rent, just after depositing his paycheck at the BofA ATM, the only thing available when he got off work at 11 PM. BofA bounced the check, because they’d put a 5-day hold on ATM deposits, unbeknownst to anyone who hadn’t read the fine print with a microscope. They not only charged him $35 for NSF, they reported him to credit bureaus and the TeleCheck people for “account abuse.” This means that NO other bank or credit union will open an account for him until next December, when 5 years will have passed. He is literally trapped at BofA, where he’s charged $5/month just to have a fucking checking account. I couldn’t even add him as a signatory on my credit union account. DIE DIE DIE MOTHERFUCKERS.

@Mistress Cynica: I’m sure he’s looking forward to his “Free at Last” celebration when he can join your credit union.

@Capt Howdy: It was worth sitting through that entire thing just for “Koh-ree-uh.” Also, the unnaturally orange lady.