Stinque
Home Latest Comments Log in
If it smells, we’re on it.
Stinque
Cassandra was right.
BackstabWatch

Another Day, Another Knife 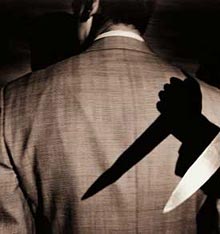 Former Republican House Majority Leader and teabagging auteur Dick Armey is outraged that the New York Times would suggest that he’s endorsing the senatorial re-election of the 2008 GOP presidential candidate:

The New York Times reported recently that FreedomWorks chairman Dick Armey has endorsed Sen. John McCain in the GOP primary in Arizona. This is not the case, although this story has been picked up and repeated by countless media personalities and reporters around the country.

This seems to be a good case study in how false information can make its way around the internet and the airwaves before it can be corrected. But we wanted to post a quick statement for all of you who have asked us about this.

“It’s hard for us to believe that J.D. Hayworth could mount a credible challenge to John McCain. Obviously, we’ll watch the race. But J.D. had a fairly short, undistinguished congressional career with virtually no initiative on his part.” (Dick Armey, Feb. 3)

If teabaggers are anything (besides illiterate and racist), they’re anti-incumbent, not anti-Democrat. And the occasional special election aside, the only incumbents available for target practice right now are Republicans.

it will be interesting to see if that race could give that seat to a democrat.

@Capt Howdy: Jamie can provide a read on the ground for that sort of thing. But even more than Florida, this is becoming the headline teabagger race for the spring.

Professor: We have a ‘moral obligation’ to seed universe with life

After years of the cringe-worthy pronunciation of nu-cu-lar during the Bush White House, it seemed like we finally had an administration who had a litmus test in staffing their National Security detail – pronounce the word “nuclear.” Not so. During an interview to discuss Iran’s weapons program with MSNBC’s Andrea Mitchell today, National Security Chief of Staff Denis McDonough definitely uttered the term Nucular. Gotcha! Critics eager for payback? Go!

How about this guy for a new Fox anchor. Note to SFL: he’s an alum of The Farm.

Professor: We have a ‘moral obligation’ to seed universe with life

I tried that but Asian guys can’t get pregnant.

wait
but I have been paying child support for little Wang all these years . . .