Stinque
Home Latest Comments Log in
If it smells, we’re on it.
Stinque
Assholes, they do vex us.
Asploders Syndrome 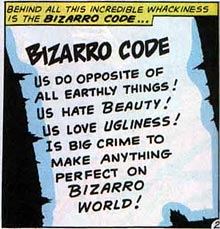 That’s what we’re supposed to say, right? Anyone who even thinks about cutting defense spending is a traitor to our country?

I don’t think any agency of the federal government should be exempt from rooting out wasteful spending or unnecessary spending. And I, frankly, I would agree with it at the Pentagon. There’s got to be wasteful spending there, unnecessary spending there. It all ought to be eliminated, and we should be going through this budget line by line and, and asking the question, is this spending worth having to borrow money that our kids and grandkids are going to have to pay back?

That just sounds too reasonable to be trusted. But we can’t for the life of us figure out what Senator Non-Alliterative-Title Representative SprayTan is up to.

Boehner: Pentagon Should Be Part Of Spending Freeze [TPM]

“Specifically, pay and body armor for gays and for studies and analysis of rolling back DADT, and defense budget increases in districts where Democrats could be vulnerable in 2010, i.e., New Mexico’s 2d Congressional District, possibly NM CD 1. More F-22s and F-35s, though.”

Speaking of the DoD, here’s something newsworthy. Exactly why do we need drones flying around in US airspace?

SINGAPORE – Officials at the influential Mitre Corporation are calling on international aviation authorities to lay out a plan to safely integrate unmanned planes into civil airspace in the coming years.

“As we develop new concepts for air traffic management, we need to develop these concepts in a way that facilitates the integration of unmanned aircraft into the system,” Andrew Lacher of Mitre said during a Feb. 1 speech at an Association for Unmanned Vehicle Systems International-sponsored conference here. “Right now the community is not addressing unmanned aircraft as they plan the aircraft control system that will exist for the next 20 years.”

In the United States, unmanned aerial vehicles are currently restricted to flying in low density airspace over rural areas in order to deal with the fact that their pilots have less situational awareness compared to manned aircraft. UAV pilots also have fairly limited methods of talking to air traffic controllers and are generally only allowed to fly within a certain distance from their bases in the United States due to safety concerns.

As drones begin to be used in increasing numbers in non-combat missions over civil airspace a new system must be developed to ensure the planes can operate safely near manned aircraft. Automatic sense-and-avoid systems that can see other aircraft and make instant decisions on how to avoid a midair collision are one of several critical technologies that must be fielded before large numbers of UAVs can operate in relatively close proximity to civil planes, according to Lacher. Authorities must also find out ways to ensure that drones can continue to fly safely if their primary link to their ground control station is cut.

The U.S. Defense Department, Federal Aviation Authority and Department of Homeland Security have only recently begun to work on such a roadmap, according to Lacher.

“What the community needs to do is look at the challenges that what we think are the most critical and hardest to deal with associated with sense and avoidance, link vulnerability and the ATM integration,” said Lacher. “We have to look at it from a technology standpoint; operations and procedures as well as policies associated with these technologies.”
While critical, this technology won’t come cheap. Lacher estimates that it will cost between $2 and $3 billion to simply develop automated sense and avoid technology.

Hey, if they want to go back to Goldwater conservatism, more power to them. They’ll be shocked to see how close those positions are to the present-day Democrats.

Love the alliteration of Senator SprayTan, but let’s not bestow upon Representative Boehner a title he hasn’t yet (Voinovich is only 73, which is, like, 47 in Senate years) earned.

I’m sure Boner knows exactly which spending to cut – all he’ll do is cross-reference every blue district against the appropriations bill.

But I give it about 10 hours before RedState denounces him as a traitor… :)

He’ll only find waste in Democratic districts, of course. The backbone of the DOD is in all the Republican districts.

@TJ/ Jamie Sommers /TJ: No way, baby. We’re building or developing lasers, pain rays and nukes for the rest of you in the Demrat-represented NM CD 1 and CD 3, and (at one point at least) housing an alien up at Los Alamos (NM CD 3). Holloman AFB in NM CD 2, which the GOP will try to get back this year, is scheduled to get 40 more F-22s by the end of the year. The Luftwaffe has been training there for years, btw, so if you want German food in New Mexico, head for Alamogordo.

How do they live so long, anyways? It’s not like it’s a healthy lifestyle. They’re like Skesis.

@Tommmcatt Say Relax:
now THAT was a arcane reference

I’ll bet you whatever you want that almost everybody here got it. You simply can’t overestimate these people.

It is dying for a remake anyway.

@Tommmcatt Say Relax:
there have been rumors and rumors of rumors for years but it never happens.

I actually had to think for a minute. at first I thought it was the one costarring David Bowies package. but that was Labyrinth

this is how one hand washes the other:

what else is Sarah PAC spending money on? Books — her own book — according to ABC News:

The former Alaska governor and 2008 Republican vice presidential candidate had her political organization spend more than $63,000 on what her reports describe as “books for fundraising donor fulfillment.” The payments went to Harper Collins, her publisher, and in some instances to HSP Direct, a Virginia-based direct mail fundraising firm that serves a number of well-known conservative politicians and pundits.

Sarah PAC spent another $8,000 on colorful bookmarks designed by a Nashville-based event branding firm. And her committee paid her publisher $20,000 for what appears to have been the cost of sending her personal photographer and another aide along on her book tour.

He’s going to demand the abolition of the DoD Inspector General, denouncing their work as ‘the hand of Al Qaeda in our own government, working tirelessly to weaken our armed forces and our resolve to kill terrorists everywhere – all billion of them.’

@Dave H: I’d love to see unmanned drones flying search-and-rescue missions, and I’d love to see them dumping water on wildfires. Those sound like excellent places to not have to send live pilots — both missions are very dangerous and kill pilots every year. I can also think of a half-dozen scientific missions off the top of my head that would benefit from sending out a drone vs. a real pilot — most of which probably aren’t flown right now because of danger or expense reasons.

That’s just a list of things I thought of in about 20 seconds. Imagine what kind of peaceful uses could be thought of by people actually dedicating some thought to it. It makes sense to have a system in place to deal with the likelihood of this happening in the future. Just because they’re used to spy and kill by the military doesn’t limit them to those missions here.

@IanJ: My thoughts exactly, but we’re thinking about are flights over low population density rural areas that are already OK under the rules. What they are talking about in the Dave H article is putting drones over cities, most likely for law enforcement/”national security” purposes.

BTW, who is more badass than the CIA? The DEA.

@redmanlaw: Seen “Hurt Locker”? Those are some badass guys.

@Dodgerblue: Wasn’t at Video Weirdness when I went last week, so I got “Moon” and “W”. It’s on my list.

@TJ/ Jamie Sommers /TJ, RML: To be fair, however, both NM CD 1 and CD 2 were in the hands of the ReThugz until Hope swept across the nation. Plus that, the odious former Sen. “Saint Pete” Domenici, so called for his ability to get the federal dollars flowing with his blessing, brought loads of caish this way, making NM one of those states that gets more than it pays in taxes. The dee-fense projects were therefore in place when the Dems took over in NM CD 1 and 2 (we made NM CD 3 safe for freshman Sen Tom Udall for years when he was in the House, so he could be anti-war, pro-choice, pro-labor all he/we wanted).

FBI, US Attorney’s Office, and California Secretary of State also asked to investigate.

ADD: LAT sez Whitman’s campaign laughed at the allegations but had no comment

Jinx! You owe me a coke!

@Tommmcatt Say Relax: You owe me a glass of wine.

Wonder what sort of threats, if any, Meg made to Tom C to switch to the Senate primary. Did you see that he’s leading Carly and the neanderthal from the O.C.? He’s got more support than Carly among likely women voters, too. Boxer should be nervous – she’ll lose to a moderate like him; her best hope for reelection is the wackadoodle teabagger.

God forbid they remake that movie – they’d probably decide that since there are Muppets around, it should be a kid’s movie. Ruin the entire fucking thing.

@redmanlaw:
no tieing people over a fire ant hill now.

@Capt Howdy: Tying trespassing miners to wagon wheels and rolling them down cactus covered hills Geronimo-style remains in the “Penalties” section, however.

@redmanlaw: Yeah, that could incentivize a guy not to trespass again.

@Dodgerblue: One strike, you’re out.