Stinque
Home Latest Comments Log in
If it smells, we’re on it.
Stinque
Cassandra was right.
Customer Service 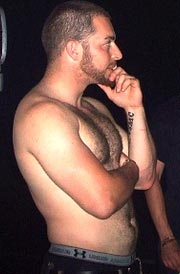 Hey, everybody, Adam Kokesh is celebrating his 27th birthday today! And his New Mexico congressional campaign wants you to celebrate by donating to his Birthday Bomb!

We’re quite busy with chores today, alas, so we can’t dress up our stock Kokesh Beefcake Photo with dollars stuffed in his waist. And while we considered adding a quickie Stripper Pole, that just reminds us of Martha Stewart, which spoils all the fun.

I could totally see him making out with Homofascist on the dance floor. Or is he too old for HF?

Isn’t HF in his early thirties? Or is it 20s? I’ve never met her in person so it could be either.

Much younger than me in any case….

@HF: You know I love you, darling.

@SanFranLefty: @flippin eck: It would be my greatest honor.

And for those Stinquers not in the know, I was the subject of a (successful) Missed Connection on Craigslist yesterday. Coffee date soon!

@homofascist: Where would you put that on a resume?

@redmanlaw: Near the top.

Damn. I’ve been hard at work shellacking. All that’s left to do now is bring it to a nice finish by hand so all you feel is wood.

@homofascist: Do you have a coffee date cardigan picked out?

@Tommmcatt Say Relax: HF is a she? Damn.
@Benedick: If you call than a “muffin-top,” I guess I am packing a Portobello. Damn.

@Promnight: No honey. Ghey Culture 101: Teh gheyz often refer to one another with female pronouns. They also use “Bitch” or “Mary” in lieu of a proper name.

@Promnight: Lovingly meant and for info purposes only on my part, the feminization of gay men is an old ghetto habit and is a construct not used by those of us with a more, shall I say, evolved perspective. I do not know anyone who does it nor would I allow anyone to do it to me. It is strictly Boys in the Band and even when that play was new, the behavior, along with swishing, etc, was a relic of an earlier time. Not even when employed at the Goodspeed Opera House, the headquarters of North American Homosexual Musical Theatre, did I witness such constructs in use. People are of course free to express themselves however they wish here I merely note this, in my charmingly pedantic way, as counterbalance.

Perhaps in current context it is being used in an ironic manner and the youngers have taken it up again? I do not know. The party of gay has a very big tent. Since one’s sexuality is only an aspect of one’s life and not the sum total it has room for all sorts. From the libertine to the prim – such as myself. To demonstrate the depth of my primness I deplore drag and would like to see gay pride marches abandoned. Both mechanisms merely demonstrate our powerlessness to the greater society while claiming its indulgence. Like clever children playing dress-up at Christmas to show the grown-ups how cute and unthreatening they are for all their seeming wildness. Feminization performs a similar function which is why I reject it. When, in Angels in America, Roy Cohn (in a somewhat revisionist but brilliant characterization by the author) is accused by an ‘out’ gay man of also being gay he refuses to accept the label. To paraphrase, he says that gay men have no power. That he has power so therefore can’t be gay. What he is is a “heterosexual man who fucks other men.” A variant on the old “I’m not gay but my boyfriend is” joke but brilliantly placed and very much to the point. Of course, since then the Gay Industry has grown by leaps and bounds although not perhaps quite so quickly as the Anti-Gay Industry. Personally, I’d be happy if we could forget the whole thing and get on with raising our dogs like reasonable people.

Sermon over we now return, egos unbruised, to regular programming.

I must get back to my wood. Shellacking takes it out of you and one is not as young as one was. Time was I could happily shellack all day. And though one still loves wood sometimes there is just too much of it to comfortably shellac. And all the rubbing can leave one with a stiff back, among other things. However, let me get a grip and return to the matter in hand: the wood.

And if you think I have reached the end (or bottom) of this doublespeak – how little you know me.

@Benedick: Oh yes, how could I possibly be insulted by that? Thank god some of us are more evolved.

Meh, I like the old “she” thing, though I mean no offense. I was “taught” gay culture by a bunch of New York Drag Queens, so the fluidity in reference still has a nice “in-crowd” feel to it for me. It is, for me anyway, a sign of affection more than anything else.

I won’t use it for you guys, though, if it offends.

@Tommmcatt Say Relax: It offends me not a whit. I guess I am less evolved. And happily so!

@Benedick: ” All that’s left to do now is bring it to a nice finish by hand so all you feel is wood.”