Stinque
Home Latest Comments Log in
If it smells, we’re on it.
Stinque
Miscellaneous Top Secret Documents.
Duck and Cover 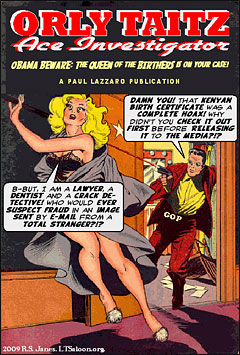 Our guest columnist this afternoon is celebrated barrister Orly Taitz, announcing her plans to run for California attorney general. Or California secretary of state. Or, for all we know, dog catcher.

Several of my supporters have recommended that I run for an office of the Secretary of State of Ca or Attorney General. As a secretary of State or attorney general I will have standing to try in court issues that were tabu to all of us as individuals. Here is a situation:

1. we don’t need 50 secretaries of state or 50 Attorney Generals suing Obama. If only one sues and gets discovery, we are done

2. in CA the democrat running for this office is an incumbent Deborah Bowen, who was worthless, didn’t check Obama’s records, and whom I sued on behalf of ambassador Keyes in Keyes et al v Bowen et al and on behalf of vice presidential candidate Gail Lightfoot in Lightfoot v Bowen. I reached the Supreme Court. Chief Justice John Roberts decided to hear the case in the conference of all 9 justices on January 23, 2009. On January 21st, right after the inauguration somebody erased the case from the docket. they re-entered it on the 22nd and during the conference on the 23rd decided not to proceed with oral argument. Later, when I talked to Justice Scalia, he didn’t remember anything about the case.

3. Republican running for office is Damon Dunn, who admitted to never even vote until last year. He was a football player and later he was in real estate. The only reason he was endorsed so far, is because he is an African American, and Republicans want to have an African American to show diversity. He admits to having no knowledge or experience with law, elections or election law

4. In terms of the office of the Attorney General, incumbent Jerry Brown is not running. From both parties we have state legislators, who termed out and are looking for a new seat to warm. Considering billions of dollars of debt in CA, all of the state legislators are lousy.

5. I will need to raise 3-4 thousand dollars to start with, probably I will need about 100,000 from start to finish

I need your input. you can e-mail me at dr_taitz@yahoo.com. put running for office in the heading

Orly Taitz to Run for Office? [OC Weekly, via TPM]

$100K for statewide office in California? Don’t think so. Maybe City Council in Dinuba, off Highway 99 near Visalia. They have a McDonalds there.

@Dodgerblue: I broke down on that road near the fish hatchery. I think it was that road. Right after the Grapevine going south?

I am in an extended debate over on “Sadly, No” as to whether or not using the word n****r ironically constitutes racism.

If she runs, and I want her to, it’ll be a festival of foolishness. I can’t wait.

@Dodgerblue: Dinuba dog catcher, perhaps. You need more than that to run for school board in SF.

I mean, seriously, check this out.

Incidentally, would I have more, or less of a point if I told you I was black?

I was going to say yes – since it certainly increases the odds that you’ve already factored in the damage the word has the potential for – but since you just compared me to someone who participates in hate crimes like lynchings – I’m gonna have to say Fuck, You Nigger.

@Dodgerblue: Naw — I was on that road near Magic Mountain. I am misremembering back to my Bakersfield days.

@Tommmcatt Say Relax: Umm…well…umm…I’m of the opinion that that word is never okay. Unless it’s on “The Boondocks.” Uh. Yeah. Conflicted. Mom used to call me one all the time; Dad says it’s never, ever okay to use it.

Reminds me of a program on “Fresh Air” when a conductor was arranging “Show Boat” using the original lyrics. The African-American chorus from “Porgy and Bess” showed up to the studio, saw the first line of the first song and walked out.

@Tommmcatt Say Relax: Making a word, which is only a symbol, completely taboo for non-racists, only increases its power and effect when used by bad people. Sorry, thats what I think.

I was permanently banned from dumbocratic underground for saying that the title of the most popular comedy album of the 70s was “That Nigger’s Crazy.”

There are many examples of derogatory terms being embraced by those who are the target of the terms, I have been among Italians, people of Polish “extraction,” what a euphemism that is, and Irish, who have greeted each other by saying “You dumb Polack,” or Mick, or Guinea. The fact that blacks may use the term is something that confuses this issue, as with Irish and Italians, that they may use the term does not legitimize the term.

But using the word ironically is, to me, OK, as long as intent is clear.

Kneejerk, total rejection of a word leads to absurdity such as the banning of “Huckleberry Finn” from school libraries, a book the entire theme of which is a boy finding the inner strength to reject racism despite the powerful social forces he is subject to which say he was wrong.

Vis a Vis Orly, there should be people in white suits and big butterfly nets chasing after her, everywhere she goes.

Is she still here? She hasn’t yet returned to the Ukraine?

it’s sooo entertaining when a psychopath runs for office…
but unsettling that she passed a bar and dental boards.

5. I will need to raise 3-4 thousand dollars to start with, probably I will need about 100,000 from start to finish

I’ve figured it out; Orly Taitz is a secret Nigerian

@Nabisco, baked: Stinque Global – up around the clock.

@redmanlaw: A Friday working lunch/retreat at the boss’s house, with wine and curry, then an afternoon swim now it’s cocktail hour. I live to serve!

@Nabisco: I was watching dusk fall over there via Pakistani and Chinese satellites. Clear night coming, 99 percent full moon.

/I approve of this use of my tax dollars.

@Dodgerblue: Dinuba has some really good organic oranges. That’s about it.