Stinque
Home Latest Comments Log in
If it smells, we’re on it.
Stinque
Miscellaneous Top Secret Documents.
The Great Beyond 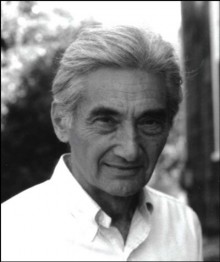 While we’re on the subject of great men who’ve freed themselves of this mortal coil, let us not forget the great historian, Howard Zinn, who passed away yesterday, and whose A People’s History of the United States sought to bring to the fore the forgotten history of the vast mass of people upon whose backs our nation was built.

Though a historian by trade, Zinn had some parting words for us that applied directly to the here and now:

“I think people are dazzled by Obama’s rhetoric, and that people ought to begin to understand that Obama is going to be a mediocre president — which means, in our time, a dangerous president — unless there is some national movement to push him in a better direction.”

So roll up your sleeves, folks and help push this administration in the right direction. Let’s do it for Howard.

Wow, Harold gets no love? A hundred years from now, they will still be talking about A People’s History of the United States . It is that good.

Let the old left die with dignity with him. I hope his loved ones held him as his last agonal breath left his body.

Ooh, fighting words. How so?

A People’s History of the United States: The original Red Pill.

@Tommmcatt Say Relax: My guess is it is because he could be seen as the Code Pink of history scholarship. Polemics overshadowed his substantive point too often, and as a result others who came at things from a similar perspective as him were too often dismissed as being another over the top hack. (I don’t think he was an over-the-top hack, but he sometimes handed his intellectual opponents all the ammunition they needed).

Harumph. Howie was the bomb, and not just because I had occasion to drive him from central P’tucky to Washington Square Park in the early 80s after missing his campus appearance due to my evening radio gig. I gave Ma Nabisco a copy of PHOTUS as a gift when she naturalized.

Maybe he told the story to a million other people a million other times about getting clubbed over the head as a young man because he was on the fringes of a Communist Party rally, but when he shared it with the young Nabisco as I navigated the Holland Tunnel, it was personal.