Even Sarah Palin’s Supporters Have Their Limits 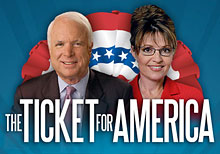 We don’t want to make too much of this — yet — but it’s worthy of notice:

when Palin announced last week that she would campaign for McCain in his reelection primary battle against ultra-conservative former congressman J.D. Hayworth, some of her most vocal supporters were outraged that she would endorse McCain, who they see as a Republican in Name Only (RINO).

Evidence includes a co-founder (and current persona non grata) of the 2012 Draft Sarah Committee saying Talibunny of “has now chose to align herself with several bad actors,” Michelle Malkin fretting about “McCain Regression Syndrome,” and a flurry of unkind remarks following Palin’s Facebook post endorsing “Commonsense Candidates.” (If you have a membership, there’s similar chatter at Team Sarah — “If Palin campaigns for McCain she can kiss her political future good-bye.”)

We’re fascinated because for the past year, we’ve seen Talibunny as the goddess of her own cult — someone who is the standard by which all else is measured. We’ve been wondering what, if anything, could get between her and her followers.

And if it turns out to be John McCain — well, there’s the finale to our musical.

Yes, in the finale she marries the Zombie McCain and they sing of their love everafter, joking about their little spat when Talibunny put three rounds through his head from a helicopter.

There won’t be a dry eye in the house.

Saw something today where Teabaggers were instituting a purity test for GOP candidates. I can’t wait!

@FlyingChainSaw: And First Dude Todd and Cindy-Lou-Hoo hook up too? Swingers?

I can see why the Teabaggers would be pissed. Heyworth is basically a Rush Limbaugh clone. Guy sounds like him, looks like him, and is just as much of a disingenuous demagogue.

@SanFranLefty: No. Cindy elopes with first dude’s dog sled team and sends sex tapes to Fox from her and the dogs’ redoubt in Yellow Knife or something. I wonder how First Dude could surprise us in the Finale. . .

And on to real news: Serena just rallied from 4-6, 0-4 down to tie the second set of her quarterfinal match at 4-4. I promise you Azarenka is having what Kathy Griffin calls that “pre-diarrhea feeling”.

I’m sure I’ve mentioned this before, but it’s no secret around here that the wingnuts have had it in for McCain for years. They’ve practically begged Foghorn Leghorn to run (despite the fact he still has debt from his last campaign). Anyhow, if you’re interested, this little bit o crazee will give you an idea of the type of shit flying around GOP circles.

@TJ/ Jamie Sommers /TJ:
you know, I think that crazee is one of the only things the dems may have going for them in the next election. it will be something like “we may be incompetent assholes but look at THOSE guys”. I think it could work.

this must have been an interesting dilemma for the Talibunny. please the yahoos and look like an ungrateful bitch or do the sensible thing and reap the wild wind.

whatever her reasoning I think you have to give her a tiny bit of credit.
Hayworth is truly the bottom of the barrel when it comes to crazee. it will be interesting to see if he can take the nomination and give the seat to a dem.