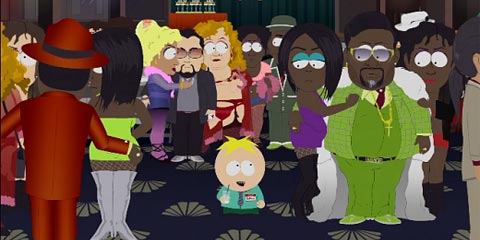 We never paid much attention to the “ACORN Sting” to begin with, so we’re not particularly aroused by news today that the ACORN Stinger was caught in New Orleans trying to bug the office of Mary Landrieu.

But since the Sting is one of those stories that wingnuts accuse moonbats of ignoring, we thought we’d see how wingnuts are handling the news that one of their own has fallen.

Surprise! We’re having a hard time finding anything.

While we’re waiting for the righteous outrage to pour in (good for you, Malkin and Allahpundit!), let’s catch up with alleged plumber and Butters impersonator James O’Keefe:

James O’Keefe is an investigative journalist and filmmaker. He filmed and produced a 2009 investigative report that helped expose corruption within ACORN, including ACORN employees providing individuals they believed to be involved in an international under-age prostitution scheme with advice on how to break the law. Congress voted to defund ACORN shortly after the videos were released.

That’s from his author bio at Andrew Breitbart’s BigGovernment blog, where O’Keefe is a featured contributor.

Breitbart himself claims he knows nothing — nothing! — about Golden Boy’s shenanigans:

“We have no knowledge about or connection to any alleged acts and events involving James O’Keefe at Senator Mary Landrieu’s office. We only just learned about the alleged incident this afternoon. We have no information other than what has been reported publicly by the press. Accordingly, we simply are not in a position to make any further comment.”

We’re willing to take Breitbart’s cluelessness at his word — that author bio also says O’Keefe “is currently working at VeritasVisuals.com,” which turns out to be a parked domain.

Fun fact: Breitbart, O’Keefe and co-stinger Hannah Giles are up for CPAC’s “coveted Reagan Award” next month. Hey, gang, it’s not too late to change that to a Nixon Award.

Perhaps the Flanagan family is unhappy that Landrieu had a hand in someone other than dear old dad being the next USA for the western district of Louisiana. One of Landrieu’s two recommendations — Stephanie A. Finley — has been nominated for the position.

Nothing less than jail time will do for this shitbag.

@blogenfreude: This could actually get interesting, given how O’Keefe’s been nominated for Wingnut Sainthood. I won’t recap here, but pieces are flinging all over the place.

Send that fucker to Angola in a fucking wedding dress with a target drawn on his ass. He can regale all the serial killers and rapists with his theories of the invisible hand while they stomp him unconscious and rape his ass into a bloody pulp. Conservatives understand the deterrent aspect of appropriate sentencing.

My back hurts when I laugh. My back is really hurting.

@Promnight: Dang, you’re always ahead of us on the details! Lemme get the LA AG on the phone again.

I think the ass-raping goes first, just so he can appreciate it properly without a lot of blood in his eyes. Also, I feel for the convicts that are committing the rape; he’s not that pretty to begin with. Definitely assraping first.

The part of this story that bothers me the most is was that SERIOUSLY the outfit he was wearing when he did the whole undercover pimp thing? Because, I mean, seriously. Scrawny white boy looked like a Northwestern or University of Chicago douchebag dressed up for one of their infamously offensive ‘Pimps & Hos’ parties. I am no expert, but I doubt REAL pimps dress like they just stepped out of a 1970s Blaxplotation film, or for that matter a Party City at Halloween.

@homofascist: The part of this story that bothers me the most is was that SERIOUSLY the outfit he was wearing when he did the whole undercover pimp thing?

I was ignoring the whole thing, but the Pimp shots are apparently after-the-fact, shot to, er, dress up the undercover footage.

@nojo: I am still not convinced the ACORN people weren’t just zooing on this guy. A fucktard start talking nonsense to me, I just go him one better which may have happend here. “Oh, yes, we can get you a grant to eat live babies from the DHHS. Can you make an ‘X’ on a form for me?”

@nojo: Well, I guess he gets some credit for not going in blackface.

@homofascist: Or a big Afro wig.