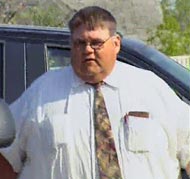 For Ted Alvin Klaudt, a famous GOP sex pervert, has copyrighted his name:

A letter and an accompanying document labeled “Common Law Copyright Notice” said former state Rep. Ted Alvin Klaudt is reserving a common-law copyright of a trade name or trademark for his name. It said no one can use his name without his consent, and anyone who does would owe him $500,000.

Klaudt was convicted in 2007 on four counts of second-degree rape for touching his teenage foster daughters’ breasts and genitals in phony examinations he said could help them sell their eggs to infertile couples. He was sentenced to 44 years in prison for rape and 10 more years after pleading guilty to two counts of witness tampering.

@Benedick: I wouldn’t let that man within a mile of my vagina.

@Nojo: Given the headline, I thought for sure it was a Chainsaw post. Text was so sedate in comparison to what our beloved FCS would write. Would love to see a side-by-side of the Nojo and Chainsaw treatment of this story. Good thing you have law.stinque.com on call for when you get a similar letter.

What happens if you say his name three times while standing in front of a mirror?

@SanFranLefty: Chainsaw would add some apocalyptic vulgarity of which I am sadly incapable. All I can do is just tally infractions.

And when GOP sex pervert Ted Alvin Klaudt sends the copyright-violation letter from his jailhouse cell, you bet I’m posting it.

@ManchuCandidate: What happens if you say his name three times while standing in front of a mirror?

Fair enough. Copyright is common law convention. If he doesn’t want us to use his name we’ll just have to call him Fat Fucking Ted, the Pederasteroid!

While trying not to heave and thereby lose the benefit of vodka eggnog already imbibed (I’m going to drop the strike-through joke real soon. Teach old dogs trix and they will do them) I would note that one cannot copyright a name. I know you all know that and are now rolling your eyes in a hurtful manner but I did not take the easy way out with law school, okay? I studied Stanislavski. Okay? We cool? One can register as a trademark a logo: ie, words plus graphical representation but not a name. I could call my next oeuvre ‘Gone With the Wind’. No one could stop me…. tra la la… God, this is so boring. I think I’m having a break-down. I think the whole country is having a breakdown. Seriously. There is a madness abroad in the land. We’re all suffering PTBS: Post Traumatic Bush Syndrome. When will be ever be made whole?

To counteract PTBS I have been re-reading Brideshead Revisited which is very beautiful (up to a point) and makes me think again of happy days at school being slippered by degenerate PT Masters. But my problem with high-Limey fiction is this: no one ever wanks or has to wash his underwear. Or live in digs and have to walk half a mile to the nearest phone to call his boy friend. It’s always summer and one’s fag does everything till one’s manservant takes over from one’s batman. It’s always strawberries on the Cam and never frowsy shops that stink of sweat. And the shame of not being Upper.

I can’t deal with these people. Didn’t this man acquire his foster-daughter from a gay couple who were not allowed to adopt her through his machinations? I have reached the end of my keyboard and can type no more.

Wow, what a novel application of copyright law: preventing the media from reporting on your criminal behavior.

Why do I suspect that even under the American $$$$$$ copyright $$$$$ system this will not work.

I see its working like a charm so far.
what a fat pig.

I guess when you look like that you grab any breasts or genitals within reach.

this is for baked

its viral dexter but its pretty funny for anyone who knows he was a guy who killed women in bathtubs this season.

What kind of unhinged social services workers do they have in South Dakota, to hand a child over to this fucktard?

And apparently he also has at least one biological daughter, implying that somebody once mated with him. Eeeew.

@Pedonator:
Eeeew.
not only eeeew but how?

I’m guessing this guy is too ugly and the crime too sleazy for him to be somebody’s bitch in prison.

@Dodgerblue:
actually I have heard the like fat white republicans.

Federal copyright law prohibits the copywriting of any name or term that is offensive or obscene. Ergo, Ted Alvin Klaudt cannot copywrite his name.

@FlyingChainSaw: But surely neonazi serial killers have certain standards. I mean, look at that guy.

@Dodgerblue: Sure, they do but they’re not standards we could share with them. Likely, their idea of a relationship would start with battering and end with a ritual beheading after a savage gang skull fuck. You know, kind of Republican. A freakish pederast is probably one of their ideals as a hot date, right up their with a large deceased animal.

Or a picture of Ann Coulter wrapped in their mother’s panties.

@Tommmcatt is hunkered down in the trenches: Possibly. But is that neonazi – or GOP?

@Tommmcatt is hunkered down in the trenches: “Or a picture of Ann Coulter wrapped in their mother’s panties.”

@Pedonator: Wouldn’t want to place the abused and neglected children of South Dakota in a foster or adoptive home of gheyz.

@SanFranLefty: No, they might recover and then what would the GOP use for fuck bait?

@Dodgerblue: Homeless kids. Snatch and grab. Kinda like the rendition program that apparently lots of Demrats support as well, but they’re quieter about it.