Stinque
Home Latest Comments Log in
If it smells, we’re on it.
Stinque
Cassandra was right.
Compassionate Conservatives, Sex Lives of the Criminally Insane 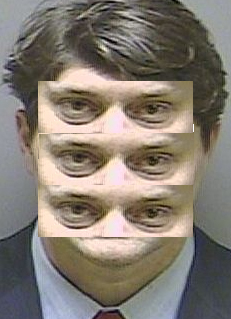 Rod wants to hear the Safe Word only it's so hard to hear when his hands close around his lovers' throats.

Twisted GOP S&M freak and former Missouri House speaker Rod Jetton thinks battering and choking people is normal, everyday lovemaking, according to a recent legal complaint, just oh-s0-snuggy, yeah, and apparently oh-so-hot when your fist hammers through the bitch’s caps and, yeah, oh fucking yeah, when you choke the bitch unconscious and it feels so, like, oh, god, oh fucking yes, so like the first time you voted Republican.

Guys snugging guys or ladies snugging ladies, well, hey, that’s a crime against god and nature, Jetton decided in 2007 and, according to TMP Muckraker:

fired a state lawmaker from his committee chairmanship in 2007 because the lawmaker had changed a bill in order to end a state ban on gay sex — or what Jetton called “deviate sexual intercourse.”

When a lesbian buries her face between her lover’s legs, say, she needs to bite her genitals, beat her unconscious and rape her anally with a live rabid ferret apparently for the encounter to qualify as honest to god sex for Jetton. Maybe if all the homosexuals in the universe were able to prove that they beat the fuck out of each other during sex, Jetton would recant his position.

Like any real Republican, Jetton believes the only sex that matters requires solidly battering if not dismembering your partner and subjecting them to the most violent and cruel humiliations possible. Maybe that’s why Jetton garnered such overwhelming support for his ‘political consultancy’.

It’s clear that Jetton’s hunger for S&M sex garnered him the respect of his former GOP colleagues in the Missouri legislature who, no doubt, enjoyed vicarious thrills knowing that the guy they’re throwing money at is using it to support a lifestyle that fully represents their politics and personal beliefs. 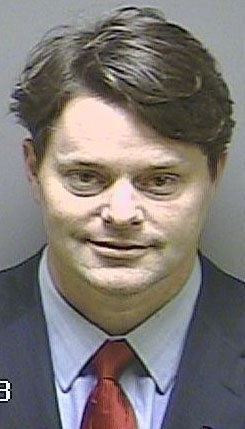 Rodster's face seems to say: I get so hard when I feel your face cave in under my boot!

The twisted GOP sex fiend Jetton, 42, certainly distinguished himself among his peers and his former colleagues by surrendering to the Cole County sheriff this week to answer second-degree assault charges filed by one of his playmates in Scott County who alleged Jetton liked sex like a Republican.

Jetton and the victim allegedly agreed in a telephone call to meet at her home in Sikeston, MO. on Nov. 15 for S&M sex, replete with savage violence and hateful man-on-woman battering, a GOP tradition, according to her complaint. Jetton is now at large on bail of $2500. The LA Times had the most cogent distillation of the victim’s allegations of Jetton’s GOP hunger for violence and coercive sex:

Police say the woman claimed Jetton hit her in the face several times “very hard” and she said she woke up at one point, lying on the floor as Jetton was choking her. The woman said she then remembered waking up while Jetton was behind her having sex in the bedroom. Police say there were bruises on the outside of the woman’s thighs, left side and breast that were photographed.

According to the probable cause statement, the woman reported “blank spots” in her memory that she had not experienced before while drinking.

Typically, the Missouri GOP icon allegedly sneered at the battered victim the next morning when she reviewed the violence done to her with Jetton, telling the victim: “You should have said ‘green balloons’,” apparently some kind of preferred Republican ‘safe word’ that lovers are supposed to bark when one is feeling close to death during an encounter to stop whatever exercise is causing distress.

Jetton’s attorney recently announced that the S&M sex fiend is leaving politics and will actually contest the charges against him – which will no doubt disappoint his colleagues who are no doubt proud of his savage appetites.

Until the trial, Jetton is at large, prowling the byways of Missouri on the hunt for new S&M thrills, after being released on a $2500 bond. Be alert and avoid accepting a glass of wine or a punch in the face from this man.  Stinque.com is advising everyone who is approached for sex by Jetton or any Republican to shout his – or possibly the party’s – favored safe word – ‘Green Balloons’ – and run away to the nearest police station for protection.

To think that John Ashcroft seems to be the only somewhat “decent” (a relative term) GOPer pol to come out of Missouri.

they really need some new spokespersons.

@Capt Howdy: Charles Manson would be an improvement.

HOUSTON (AP) – Voters in a hotly contested runoff election will decide Saturday whether Houston will become the largest U.S. city to elect an openly gay mayor.

City Controller Annise Parker has never made a secret or an issue of her sexual orientation, but others have lately catapulted it into the center of the mayoral race.

@Capt Howdy: It’s not easy to catapult a lesbian, believe me.

@Dodgerblue: It’s all about placing the feet correctly from what I’ve read in technical manuals.

I look SO much better than he does.

@Tommmcatt is hunkered down in the trenches: Maybe because you are not a twisted psycho running through the streets of Missouri, battering desperate women and living a life of complete and utter debauchery. Maybe you’re not a Republican.

@Tommmcatt is hunkered down in the trenches: Yes you do look 100 times much better, and I have no doubt that you’d look fabulous in any mug shot. But you gotta love that full head of hair he’s got, though. Totally the hair of a guy who likes to get pegged.

@SanFranLefty: Something to hold on to.

@FlyingChainSaw: Another fine contribution to the lexicon by Dan Savage.

@ManchuCandidate: Eek. I think I will make a nice cocoa and try to forget all about that.

still on catapulting a strapped on lesbian

@FlyingChainSaw: “Look at the schmuck on that lesbian!”

Rosie O’Donnell called, and she wants her hair piece back