The Yanks Are Staying 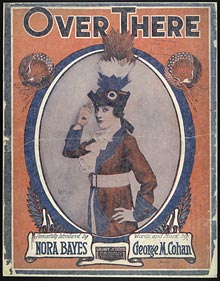 We like good speeches. It’s been a long time since we could enjoy them in American politics. We were too young to listen to Jack. We were too young to understand Bobby. Teddy could deliver a stemwinder, but his speeches were very Old School, a voice from a dying generation. Nobody younger could get away with that.

But as much as we enjoy Obama’s speeches, it pains us to say we don’t trust them. Not any more. Our immediate response to the healthcare speech was simple and direct: “Great speech. But what happens tomorrow?” Get us excited about high ideals, and that just magnifies the disappointment when the practical policies don’t live up to them.

Whenever we whine, there’s always a rejoinder: “But what about the alternative?” Which is true: the alternatives to the Obama Administration were and remain unconscionable. We’ll take what we can get, because that’s how electoral politics work. But it’s a major shift from Hope & Change to “at least he’s our sonuvabitch.” We were prepared to say that about Hillary last year, had events taken a different turn. We didn’t want to. We thought we could do better.

Then again, our deepest fear about tonight’s Afghanistan speech is that Obama may really mean it this time — that he’s choosing this campaign pledge to follow through. But we won’t know until tonight’s Open Thread/Warblogger Reunion at 7:45 p.m. Eastern. And given recent history, we probably won’t know even then.

Hey, so I hear Ping is coming out with a new line of golf clubs for the women golfers. In addition to the driver, and the fairway woods, there will be a set of “Driveway Woods.” For use when someone’s balls have been in the rough. Especially effective in the case of a very bad lie. They are perimeter-weighted and forged from titanium, designed to be able to deal with any kind of auto glass out there.

Bring back the draft and raise taxes so that the war is paid in full at the end of every month.

If Barry had balls, he’d make the “surge” announcement and then tell Congress the increased troops are dependent upon them enacting those two things. Let the chickenhawk Republicans bleating about how 30,000 out-of-work young people aren’t enough to chew up in the war machine, put their money where their mouths are.

Otherwise, get the fuck out of Afghanistan and focus on our real interest in the region – keeping whackadoodles’ hands off of Pakistan’s nukes.

I am interested in the case Obama makes tonight. I am a torn on the Afghan thing. I am the last one to support any war. on the other hand I sort of think that if military force is ever justified this may be the one. IMO.

btw
I found one of the pieces of art I recently inherited with an estimated value.

You all remember that Obama said throughout the campaign that Afghanistan was the right war to fight instead of Iraq. If he were really interested in withdrawal, he could say “that was true at the time. Now however, es all chingao and we’re making like a sheepherder and getting the flock out of there. Thank you. Goodnight.”

This isn’t going to end so well for US America, but it is the least shitty choice among a shitpile of choices. Of course, US America wouldn’t have been put in this situation if the leadershit at the time had done some different things.

Yeah, I’m looking at you W and Dick.

@ManchuCandidate: No, it wasn’t the least shitty decision to pour more money into a rat hole and piss away more civilian and military lives. I’m with Bob Herbert – it was the easiest decision.

@SanFranLefty:
if you look at the reaction around left blogistan I think its pretty hard to say that was the easiest decision he could have made at a time when the left is already pissed off.

Benedick this one is for you:

Now, vodka that comes in a pill

@Capt Howdy: Declare victory and get the fuck out. Pour the money that would have gone to nation-building in Afghanistan to nation-building and reviving our own infrastructure. Not to mention a domestic WPA-type program in the US has a much lower mortality rate than enlisting in the Army, about the only employer who has health insurance who is still hiring.

I love how suddenly every asshole with a column is an overnight expert on all things Afghani. Even some I read with pleasure at other times. I bet most of them couldn’t find it on a map. And if you were to ask what the unit of currency is they’d no doubt go off like Miss Teen S Carolina of blessed memory.

I’m reading that He Who Must Not Be Named Hope Lest He Break Our Hearts has set a 3 year limit.

Possibly the best thing to do would be to try some kind of super Peace Corps idea. And let them stay 30 years. But what do I know?

However, it does seem that Afganistan is more Pakistan’s crackhead kid brother than our major problem right now. And we should perhaps be devoting just a little more attention there. And who do we have to thank for the mess that is Pakistan? That’s right. Fucking Brits. I blame the queen.

@Capt Howdy: I can’t think what you mean.

@SanFranLefty:
not interested in a debate but declaring victory in Afghanistan is not going to do anything helpful. if they allow that country to fall to the Taliban Pakistan and its nukes will follow. like Manchu said there are no good options but walking away is not one IMO.
personally I think Obama showed some nads by making the decision he made.
it surprised me.

well
for me too.

@Benedick:
Afganistan is more Pakistan’s crackhead kid brother
I think thats not far off. I think what most people are concerned about is the kid brother getting his hands on the “good stuff”.
far from an expert myself but I have been reading BTD at talkleft who has written on this extensively and he is one of the only voices on the left supporting what Obama did. his arguments have swayed me if not convinced me.

Latest in War on Xmas: Hopey’s speech will preempt A Charlie Brown Christmas

Why do you hate America, Barack?

@Capt Howdy: I’m much more concerned about Pakistan than Afghanistan. Never should have propped up that regime for 30 years and let them get nukes in the first place.

@Capt Howdy:
I will ask if there “a post” or series of posts that lay out his view on the subject. here is a link to all his posts but 90% recently have been on health care. but he has been writing on this subject for years. if you go back a few pages you will find some Afghan stories Im sure.

One week before he waltzes off to claim his Peace Prize, Hopey will announce a major escalation in an unwinnable, pointless war in which, once again, we are supporting one set of Bad Guys against another set (or sets) of Bad Guys, while our mis(?)-guided missiles increasingly seem to land on civilians, winning over hearts and minds right and left.

I’ve heard reports even in mainstream places like NPR that the Taliban barely has a presence in the country anymore, much less Al Qaeda, and the real “insurgents” in Afghanistan are the non-US-sponsored warlords and tribal leaders competing over the poppy trade / economic opportunities, with a few otherwise apolitical peasants who have seen their families blown up by NATO bombs and are now ready to martyr themselves in a blood vendetta against the occupiers.

I say walk away and don’t even bother declaring victory. Perhaps a sincere apology and a commitment of carefully targeted ongoing financial aid would be acceptable.

The type of security risk posed by Afghanistan, even under an imaginary Taliban resurgence, can be dealt with by cloak-and-dagger means. Having an army there can only make things worse.

~surfaces~
@Benedick: an overnight expert on all things Afghani…

“Afghani” is the currency, “Afghan” the people.

Hey, looking forward to the open thread. I gots me a drinkee game for this one