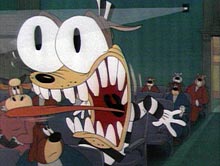 Such read the college newsroom sign posted by our managing editor, Marvelous Marv. Marv was known to go apoplectic over a fact error in a story — probably the only real-life example of Tex Avery Eyes we’ve seen.

And since our years as a college journalist just preceded Sarah Palin’s (and just followed John Wooden’s retirement at arch-nemesis UCLA), we particularly enjoyed the latest Going Rogue howler:

perhaps the most embarrassing gaffe so far is her mis-attributed quote to UCLA basketball legend John Wooden.

As the epigram to Chapter Three, “Drill, Baby, Drill,” Palin assigns the following remarks to the Hall of Fame hoops coach:

“Our land is everything to us… I will tell you one of the things we remember on our land. We remember our grandfathers paid for it — with their lives.”

Only the quote wasn’t by John Wooden. It was written by a Native American activist named John Wooden Legs in an essay entitled “Back on the War Ponies,” which appeared in a left-wing anthology, We Are the People: Voices from the Other Side of American History, edited by Nathaniel May, Clint Willis, and James W. Loewen.

Marv, wherever you are, pick your eyes off the floor.

And speaking of making shit up ….

I suppose it’s a step up for this twat that the quote was really a quote at all. She makes virtually everything else up wholecloth.

John Wooden still attends UCLA basketball home games, although I think he should lay off this year because the team is so crappy it could induce a heart attack.

@Jamie Sommers:
I’m surprised she didn’t claim she is a Cherokee princess.

@SanFranLefty: She left that one to Todd.

Add: Well, now that I think about it, that makes her an Eskimo princess.

@Jamie Sommers: Actually, that was the other book news today:

FLAT-OUT WRONG. According to a history compiled by a Bristol Bay author for the conservation group Trout Unlimited, “The fishery began in 1884 when San Francisco businessman Carl Rohlffs organized the Arctic Packing Company and built the first cannery on the Bay at the Native village of Kanulik across the Nushagak River from present day Dillingham.”

Did you know Sarah Palin has thirty words for “lie”?

@nojo: See. RML and I called his so very long ago. It is never, never true.

Hey, what the hell, threadjack, but I have read a couple of things today on the Bush-Cheney, LIHOP- MIHOP issue, the debate, which to me does not have any substantiation, over whether Bush-Cheney made 9-11 happen, or knowing something was coming, purposely allowed it to happen, to justify their war plans.

But today, two stories out there mention two post-9-11 events, both of which I believe were, and may be provable, cases of Bush-Cheney orchestrating events to justify their war.

The anthrax attacks, and the escape of Bin Laden from Tora Bora.

The anthrax came from a government lab. Thats on the record. US Army militarized strains of anthrax were used against members of the press and democratic senators. Duh, what more really do you need, film of Cheney ordering the attacks?

And Bin Laden’s escape from Tora Bora, and its on the record here, generals on the ground knew they had him, requested reinforcements, and the Bush admin refused, and shortly after you have Bush bizarrely claiming he is not much concerned about where Bin Laden is.

And these are very very critical events in justifying the war against Iraq.

I think history has so far completely failed to recognize the effect of the anthrax letters in creating hysteria within the DC bubble. People I know who were congressional staffers at the time were genuinely, personally, afraid, and so were their bosses. Everyone in DC went on prophylactic cipro, thats not much remarked on, and there were reports at the time that the White House staff went on Cipro before the attacks. The Anthrax came just at the time people might have regained their composure after 9-11, and they targeted the media and democratic senators, remember, the senate was 50-50 at the time, the anthrax attacks made an enormous impact on specifically those who wouldd have opposed the Bush war plans.

And if we had captured Bin Laden, how could we justify expanding the war, people would have been, ‘what do you mean, we caught the bad guy.”

I think someday it will come out, it will be proven, Bush and Cheney orderd the anthrax attacks, and ordered that Bin Laden be allowed to escape, in order to be able to use the Bin Laden threat for many more years.

These things are plausible, they are logical, all the facts about these events points to it, and I think it will someday be proven, and will not be able to be relegated to the loony conspiracy theory bin, as is the case with “controlled demolition,” there was no plane at the Pentagon. I am inclined even to believe that its a psy-ops tactic to encourage wacky conspiracy theories in order to discredit the real conspiracies, the anthrax attacks, and letting Bin Laden go. These are the kinds of psy-ops, used to control the population, that neocon, Straussian theory and beliefs would have no problem with.

@Promnight: Speaking of anthrax: There is at least one federal agency which is still having responses to mail surveys delivered to a small city hundreds of miles from the DC area headquarters. Employees open the envelopes here and then FedEx the safe response forms to headquarters. You’ll probably never in a million billion years guess when this terrified routine got started.

@Promnight: Yes, darling, you’re right on the bin Laden thing (which was obvious 8 years ago) and on the anthrax nightmare.

I know people who were on 90 day regimens of Cipro, because they worked for certain Dems on the Hill who officially got the Anthrax, plus Dems and nonprofits who got the Anthrax or things that looked a hella like Anthrax but it never got that public.

90 days on Cipro does terrible lasting damage to your immune system. Not to be too graphic, and I will try to be somewhat vague, but it rips you out, especially if you’re a woman. If Mrs. Prom has ever had to take Amoxicillin for more than 96 hours, she’ll tell you how baby penicillin wrecks havoc on the ladybits. Cipro is taking Amoxicillin to 11 and then cubing it. And you could do nothing but eat yogurt and apply ice 24/7 and it doesn’t help. Basically, in my opinion, thanks to needed and prophylactic Cipro, more than half of the female staffers on the Hill were in pain and or incapacitated from October 2001 to February 2002. Perfect time to plot a war, without their brains and sensibility weighing in.

@Dave H: That would be all the agencies and members of Congress. The only parlor game is figuring out which agency is sending its mail to your neck of the Midwest.

@Promnight: Duh, what more really do you need, film of Cheney ordering the attacks?

Uh, yeah. Combine it with film of the Oval Office meeting where they all deviously decide to let Bin Laden go. Bonus points if you include close-ups of everyone rubbing their hands.

I’m quite satisfied with criminal negligence born of hubris, and I’ll be patient to wait for even more damning facts to definitively emerge.

Either way, one thing is certain: It couldn’t have worked out better for them if they’d planned it!

Total TJ here, but I decided to do NaPlWriMo this month, and wrote a play. It features time travel. Different challenge from writing novels, which I’ve done the last three years.

@Promnight:
what do you mean, you don’t believe in “controlled demolition’?
it’s perhaps the biggest piece of irrefutable evidence there is! buildings just don’t fall that way prommie, it’s a physical impossibility.
never happened before in the history of planes hitting buildings, and on that day it happened twice? please.
i’m on my way to the airport, but when i have time i’m sending material to you…make ya a truther!

I put my money on good old-fashioned incompetence. It’s been the winning ticket so far.

I think we all get a get a bit brainwashed by Hollywood and its elaborate thrill plots and project the cunning of its villains onto bureaucratic dolts like Cheney. He couldn’t plan a decent traffic jam let alone mastermind anything so complex as going to the post-office and mailing letters. To suspect them of being capable of planning the escape of Bin Laden is to dignify their incompetence and somehow add purpose to what has none. Like screenwriters and their ‘backstory’: which is usually some ridiculous flummery meant to explain to an audience of pre-teen boys exactly how it is is that a: Batman can afford the gas for the Batmobile and b: why he’s so bad-tempered. I don’t buy it.

And let’s not forget, if they were actually still in charge instead of merely running the Democrats ragged, we would most likely have bombed Iran by now.

@Benedick: w/r/t 9/11, I’m with you that it was sheer incompetence and failure to connect the dots. On letting OBL get away, I’m less sure about that one. He was a good foil and excuse for invading Iraq. Ditto the anthrax.

@SanFranLefty: Did they need an excuse? They were doing it anyway. And Bin Laden was not the excuse for the invasion. Didn’t Bunnypants announce that he wasn’t important? As for the anthrax: Congress was already completely cowed. Plus, it would take a certain imagination to dream it up which is far beyond the ability of anyone in that crew. Much more likely to be a unibomber.

Of course I know absolutely nothing about any of these things but, like Charles Krauthammer, I never let that stop me.