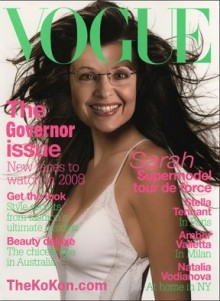 On her book tour, Sarah Barracuda pretends to be one of the people. But she’s really winging across the country on a private jet.
As much of her entourage, including HarperCollins publicist Tina Andreadis, risked a collective case of White Line Fever, covering more than 3,000 road miles during the book tour’s first week, Sarah Palin herself seems to have remained above it all, apparently cosseted in the luxury of a Gulfstream II 12-passenger jet rented from Universal Jet Aviation of Boca Raton, Florida, at a cost of more than $4,000 per hour.

But wait – she’s supposed to be one of us!

It seems now that Palin hasn’t been on the bus, except for short hops between local airports and hotels and book-signing sites. Instead, as first reported by the Alaskan blog Palingates, she’s apparently been aboard UJT750, the Gulfstream American twin-jet that she first boarded at Westchester County airport shortly after noon on November 18, bound for Grand Rapids, Michigan, and the first stop on her tour.

She will do anything, anything, to get money and power.  I guarantee she will run for office again – she’s an attention whore of the highest order.  We will never be rid of her.

She’s not running — she’s just hinting at running, which is all she needs to remain on the agenda for the next two years.

@nojo: I dunno. I can see her running in the sense that she’s really running for the eventual nominee to pick her as VP candidate. I mean, let’s face it. That bucket of warm piss is perfect for her. All the perks of power and none of the icky responsibility.

“Dagnabbit! See, there goes that opposition research crowd again. The facts, nothing the media wants to deal with when covering My Majesty mind you, is that my muscular therapist and his fucking massage table did not fit on the fucking bus. An essential component of my fitness regimen is daily massage, an hour jog and loving Christian sex with an Alaskan bull moose. Why do you opposition research people hate fitness?”

She should have sold the jet time on eBay instead and pocketed the difference.

@nojo: She won’t want to handle it but she sure as shit can’t handle first fiddle. Of course, your question is the one that will ultimately kill any plan to hitch her star to Mitt’s Mormon Wagon because neither he nor anyone else will put up with her shit again. And I think Original Wonkette had a great point a few weeks ago when she said that no one but the koolaidiest of kool-aid drinkers will work for her anyway after this book, so good luck assembling a campaign staff.

@Jamie Sommers: I also don’t think her aura can withstand an inevitable primary defeat. (Recall that she really quit to avoid bad news from Alaska.) It’s harder to blame somebody else when your name’s on top.

However, I need to revise one point: She can always hint at 2016. That gives her plenty of high-income years to fleece the flock.

@blogenfreude: Too local — she has a national stage and fawning crowds right now as a freelance blogger. Senators have to do something for that kind of attention.

Plus, she’s not popular in Alaska — she quit just as the numbers were catching up to her. She might win a primary there, but a general is far from a sure thing.

Palin is shrewd, no doubt about it. Which is why she’ll abstain from commitments as long as possible. It’s the glory she wants, and that she has. Why risk it?

@nojo: Maybe, but a state that sent Ted Stevens to the Senate again and again could be conned. The media will make it a national campaign, and that might sway Alaskans.

Does she even realize that these book promotion costs will come out of her cut? She’s not a smart grifter, she probably thinks its like running for Veep, she can spend away and others will pay for it.

I bet we will soon be hearing about her dispute over money with her publisher, and how it was all the publisher’s fault she hired the jet.

@nojo: Shrewd? Only when compared to her fans, she is not smart, if she were, she would not have had to have a book written to describe why all her mistakes were someone else’s fault.

Shrewd, as in cunning. It’s not about the presidency — it’s about the brand. We can snipe all we want (and it’s quite entertaining to do so), but we’re not the target market. She’s on top of the world right now — her world, not ours.