Stinque
Home Latest Comments Log in
If it smells, we’re on it.
Stinque
Miscellaneous Top Secret Documents.
A Thought At Bedtime

Quick: Can You Spot the Horribly Sexist Photo? 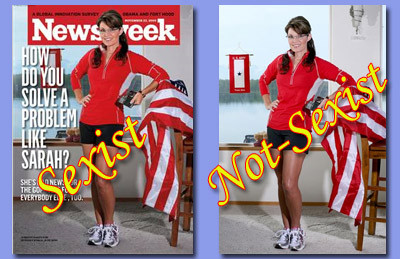 Sarah Palin is angry… again. You see, for the thirteen-hundredth time in as many months, the morally bankrupt liberal media establishment has shown itself to be little more than a grungy, stinking, mud-puddle of squealing sexist pigs, as exemplified in their most recent uncharitable comments about… well, about Sarah Palin. And Sarah Palin, defender of women’s rights that she is, is not going to stand for this scurrilous slander of womankind as embodied by the unjustly maligned personage who she, herself, happens to be. No, indeed. If nothing else, Sarah Palin lives by the motto “an attack on me is an attack on all of us” and such an attack cannot possibly be left to stand, unanswered by all of womankind.

And so we bring to you the latest outrage that has so unjustly been foisted upon the virtuous personage of Sarah Palin (and by Sarah Palin, of course, we mean all of womankind… for the two are synonymous and interchangeable). This outrage comes to us in the form of a magazine cover so horribly sexist in its intent, innuendo and execution that… well, it simply has to be seen to be fully appreciated (image shown above, left). You see, what the scurrilous scoundrels at Newsweek have done, is to place on their cover an photograph from a photo shoot that Palin participated in for Runner’s World Magazine (image shown above, right). And As Sarah Palin herself has aptly noted, such a move is:

“sexist and oh-so-expected by now.”

You see, by placing this image on the outside cover of the magazine, what would otherwise be a flattering portrait of a physically fit State Governor becomes a bludgeon by which the hopes and aspirations of all womankind (and by all womankind, of course, we mean Sarah Palin) are brutally undermined.

Poor, poor Newsweek. If only you’d had the sense to print the photo inside your magazine, where it belongs, your phallocentric, patriarchal agenda (and by that I mean dislike of Sarah Palin) would not so easily have come to light.

Serolf Divad thinks Sarah Palin should put down the bong for a little while.

If the running shoe fits…

SF independent book store announces they will donate the proceeds of the sale of Going Rouge Rogue to the wolf-saving Alaska Wildlife Alliance.

and by Sarah Palin, of course, we mean all of womankind… for the two are synonymous and interchangeable

I think the word you’re looking for here is fungible. (Probably not, actually, but it’s such a fun word…)

@IanJ: It is a good word. I always have to look it up. But fun to say. Ratiocination is another.

its all about context you see.
and the context is that she looks and sounds like a cheerleader no matter what she is wearing.

@Capt Howdy: Come see the violence thats inherent in the system, look, he’s opressing me, this is what I have been going on about . . .

@Capt Howdy: Thats Bullcrap, sexism shmexism, she cannot have it both ways, that wink during the debate announced to the world “I am a Bimbo,” and people get exactly the amount of respect they demand, thank you.

And another fucking thing, she plays herself as hero to the stupid, “look at me, I am just a God-lovin’ baby-pumpin’-out-housewife, golly, gee,” a walking refutation of equality and empowerment for women and icon of the traditional role model, she is the human embodiment of that song, “I’ve been to paradise, but I’ve Never Been to Me,” so fuck her, the bimbo.

at least someone over there was smart enough to ask the right question.

my worst nightmare is that palin is the wink of of tomorrow’s political women.
emma goldman is spinning.

@Capt Howdy: I am cranky today.

Look at this from the Onion, under the headline “Area Man Passionate Defender of What He Imagines The Constitution To Be:”

ESCONDIDO, CA—Spurred by an administration he believes to be guilty of numerous transgressions, self-described American patriot Kyle Mortensen, 47, is a vehement defender of ideas he seems to think are enshrined in the U.S. Constitution and principles that brave men have fought and died for solely in his head.

“Our very way of life is under siege,” said Mortensen, whose understanding of the Constitution derives not from a close reading of the document but from talk-show pundits, books by television personalities, and the limitless expanse of his own colorful imagination. “It’s time for true Americans to stand up and protect the values that make us who we are.”
According to Mortensen—an otherwise mild-mannered husband, father, and small-business owner—the most serious threat to his fanciful version of the 222-year-old Constitution is the attempt by far-left “traitors” to strip it of its religious foundation.

“Right there in the preamble, the authors make their priorities clear: ‘one nation under God,'” said Mortensen, attributing to the Constitution a line from the Pledge of Allegiance, which itself did not include any reference to a deity until 1954. “Well, there’s a reason they put that right at the top.”

things heating up in the thread I told you to watch.

@Benedick:
I used to get fungible and another lovely word, frangible, confused. Both are much prettier than, say, shamwowish or gertruditude.

@Capt Howdy: I am shocked, shocked, that you would support the deliberate choosing of a photo, you sexist pig you.

@Jebediah: Smithereen is a wonderful word, and so is “shilleaghlea” or however you spell it, apparently, other then “whiskey” the only gaelic words to make it into english.

@Prommie:
looks like I have local backup.
this could be the day we both get banned.

@Jebediah: fungible sounds so unlike what it means.

@Prommie: There are surely many more. cairn; loch; batcave? I can’t think now. But there must be more. Please tell me there are. Don’t make me go and look it up I beg of you.

@Jebediah: Oh, I know, too late, this should be one of the first mentions in any discussion of cool words, its not wit when it comes too late, but really, I have to mention “embiggens,” which as we all know is a perfectly cromulent word.

I want to invent a word for the comeback that comes too late, the witty rejoinder you think of the next morning, as explored on the Seinfeld episode, about “the sea called, its running out fo shrimp” or whatever that joke was.

The germans probably have a word for it, in which they simply run together their words for “the witty comeback that comes too late, producing a feeling of frustration and ultimately, futility over the inexorability of the march of time.”

@Capt Howdy: You know how strident those feminists are. They just need to relax a little, get laid.

Borat slew me with the “Hey, lady, why the long face” line, too. I say it to my Westie every day, westies have a long, horselike face, but so cute.

@Prommie: The Franch do, and it’s a beaut. L’esprit de l’escalier; the perfect rejoinder only thought of when one got to the bottom of the stairs, aka, too late.

I can’t speak to the Irish. Don’t make me.

“Craptacular” should be recognized as a legitimate word, with the understanding that its legitimate use is limited to describing any and all Donald Trump projects.

Lubricious sounds as dirty as anything, doesn’t it?

I see that Team Sarah is alive and well here.

and as I said the other day none of the people over there defending her would admit to being puma leaning. they all left because the site was not puma leaning enough. this is what I find troubling. not that this republican bimbo exists but that so many on the left are willing to defend her. and if they defend her in public they could vote for her in private.

@mellbell: Thank you, thank you!

@Capt Howdy: Thank you for destroying my day. And I thought the worst that could happen would be taking the dogs to get their Lyme shots. At least you spared me the trouble of going to see 2012.

@mellbell: Kibosh, Galore, please, are these not the very best of words?

Speaking of banshees, I do still remember my grandfather and his brothers and sisters, all born in the late 1800s in Ireland, and man were they a ghost-believin’-in bunch, they would tell ghost stories often, and they were scary.

@Capt Howdy: I love how, on that thread, they started saying the headline was sexist too. Hasn’t anyone ever watched The Sound of Music? Where my gays at?

@Benedick:
bet you never thought you would be called a neanderthal

that is a funny image.

and dont be sad have fun. my daily puma poke has become one of the things I look forward to everyday.

@mellbell, bennydick: “Shanty” has been transformed here in northern New Mexico into the Spanglish word “shant” (pronounced “shawnt”, sometimes in said with a hard “ch” as “chantay”) for one’s crib or pad; i.e., “Let’s go party at your chant.”

As some of you know, Mrs RML is Hispanic-Anglo (or “coyote”) partly from her dad, but also from the Scottish family ancestor who arrived here on the shores of a sea that has been dead for 65 million years. Someone at her cousin’s workplace was giving a bunch of crap to the immigrants they said are ruining the country. Her cousin replied, “you mean like my great great grandfather from Scotland? We look Hispanic, but we’re part Scottish, too.”

Embiggens is a word very dear to me. Cromulent, too.

While there are some obvious Roswell jokes to me made (see my FB post) Not-Michael-Palin drew a huge crowd there on a 2008 campaign swing in which she also avoided Albuquerque (hardly a liberal bastion)> The GOP hacks showed up then to support the ticket, but not now so far for Sarah on her own.

Im sorry to go on about it but that thread just gets funnier and funnier.
I have to share this comment. it almost made me wet myself:

Sexism is ok with
Capt. howdy apparently.
After all, politics is a “contact sport” he tells us.

It has been for a long time
you just don’t see enough of his comments, or follow his links to pornography…I doubt I’ll get over that brazen link for a long, long time.

ok thats it. last one. I promise.

ok
I know I promised but this is worth mentioning. the main FEMALE poster at TalkLeft has a new thread up saying the exact opposite of the previous “poor Sara” thread posted by the primary male poster.

Sympathy for Sarah Palin because of the Newsweek photo? She willingly posed for all those photos in Runner’s World. (Here’s the set) I have none.

btw
Jeralyn is the one who chased away all the pumas.