Stinque
Home Latest Comments Log in
If it smells, we’re on it.
Stinque
Lovely day for a Perp Walk.
Dispatches From Hell 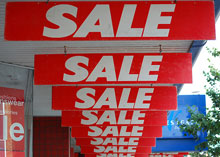 You’d think Apple introduced a new iPhone, the lines are so long to take advantage of a shooting:

“In the wake of the horrific act of Islamic domestic terrorism at Fort Hood Texas, it has been learned that militant homosexual activists recently made similar online postings to those of Nidal Malik Hasan, threatening additional acts of terrorism against Christians,” stated an email from Matt Barber, Liberty Counsel’s director of cultural affairs, as well as an associate dean at Liberty University Law School.

Said militant homosexual activists are actually commenters at Joe.My.God. And while the referenced post has been deleted, Joe warns his readers not to “post anything, even in jest, that you wouldn’t mind saying in a signed letter to your local newspaper.”

Here, of course, all Swiftian vituperation is welcome. We’re not a target yet.

Peter LaBarbera: The Liberty Counsel Has Called The FBI Over JMG Commenters [Joe.My.God.]

The Liberty “Counsel”? Are they Liberty’s attorneys, or just too dumb to know the difference between Counsel and Council?
Either way, we deserve to be denounced by them. Come on, FCS–they’ve thrown down the gauntlet.

Gay terrorists? What do they do, sneak in and redecorate the place? Put eyeshadow on Jesus? :)

@Mistress Cynica: My standard line is “we could use the publicity,” but in this case I pulled back a bit.

@ManchuCandidate: Dontcha think there have always been whack jobs like this? Why is it that they are getting more attention now? The intertubes?

Oh, it’s all in good fun when they spew hate and threaten violence against others but when a little of it comes back at them … in jest, they whine to the feds.

Whatever, losers. Don’t dish it out if you can’t take it.

@Dodgerblue:
The intertubes play a big part, but I think it’s also the desperation. They feel that their homogenous world and supposed place at the top of the heap are disappearing so they lash out at everyone who they blame for it.

Come on, Noj’, people are counting on us to bring on the apocalyptically vulgar. We can post something about HFA’s HOT LUNCH OFFENSIVE, a campaign to give every Christian in America a HOT LUNCH. Then an ‘investigative reporter’ at some fucktard site like WND gets tipped off on what hot lunch really means, breaks the Stinque.com code and blows the lid off of the story. We appear on Nightline in ski masks describing why the jesufascists deserve a hot lunch and would probably enjoy the sensation.

There isn’t enough semen in that plan. More semen, IMHO, is needed. And thumbtacks.

@FlyingChainSaw: people are counting on us to bring on the apocalyptically vulgar.

If nothing else, I’m adding that to my t-shirt list.

@Tommmcatt is hunkered down in the trenches: Thumbtacks. Wow, that could hurt.