Hate Addicts Shoot Up for Schoolchildren 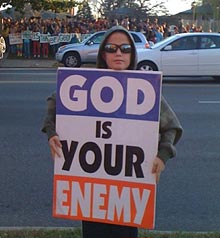 Like Randall Terry, the Westboro Baptist Clown Troupe is usually so predictable in their outrage, it’s not worth paying them notice. But today we’ll make an exception:

Westboro Baptist Church, the fringe-of-the-fringe anti-gay group famous for protesting at military funerals and claiming that God is punishing the country for its tolerance of homosexuality, was spotted this morning protesting outside Sidwell Friends, the school attended by Sasha and Malia Obama.

Protesters were carrying signs with anti-gay, anti-abortion and anti-Obama slogans, slowing down traffic all along Wisconsin Avenue this morning.

Sidwell Friends Middle School – STOP lying to those kids! … Quakers?! Are you frigging kidding me? You pretend to be all non-violent, and you allow the most bloody, deceitful, evil, murderous bastard and his shemale sidekick to place their satanic spawn within your four walls?

Like we say, they’re usually beneath notice, but as we’ve noted before, we thought perverts had to maintain a safe distance from children.

Oh, and did we mention Terry? He’s done it too.

I am pleased to see that as the Vox Stinque poll currently stands, the choice, “The swarthier the better” stands at -1%. Oh, math!

Ironic that the same crowd that regards Ann Coulter as a female role-model would start slinging the “shemale” term around. :)

@al2o3cr: They’re just upset that Michelle could whip them all at arm wrestling.

Also, I was actually up that way this morning (dog-sitting for someone who lives near the National Cathedral) and would’ve grabbed pictures but for that it completely slipped my mind.

These yahoos are lucky that they live in a country where they can get away with this crap.

A prominent social-conservative activist group is using comments made by readers on a gay-rights Web site as “evidence” that the LGBT movement is mulling using “organized terrorism” against Christians.

“In the wake of the horrific act of Islamic domestic terrorism at Fort Hood Texas, it has been learned that militant homosexual activists recently made similar online postings to those of Nidal Malik Hasan, threatening additional acts of terrorism against Christians,” stated an email from Matt Barber, Liberty Counsel’s director of cultural affairs, as well as an associate dean at Liberty University Law School.

Isn’t the Westboro church relearning the lessons of the Egyptian Pharaohs that inbreeding doesn’t work?

@redmanlaw: That one’s coming in a few.

@mellbell: Well, here’s your correspondent’s Westboro Church report, because I just happened to be in DeeCee today. (Next time I’m here we have to get together)

And I managed to not beat the shit out of any of these asshats. Because your very own SFL was leaving the Supreme Court after getting up at the Ass Crack O’Dawn EST (I don’t really want to calculate how early in the morning/late in the evening it was PST) to get in line, and I walked out of that amazing gorgeous building after checking on the health of Justices Stevens and Ginsburg (peppy and alive) with my cranky, caffeine deprived self, only to walk by some of these ass hats wearing their GodHatesFags.Com and GodHatesJews.com tshirts out side the Supreme Court. I managed to not bite their faces off. Then I did some work related shit, took an hour for a walk to get some fresh air, and went by the White House to check out the scene. Got to see Bo the Dog being walked by the gardener, after I recovered from my excitement (on par with a 12 year old girl at a Miley Cyrus/Jonas Brothers show), I was walking back to my hotel and passed a passel of the Westboro grandchildren, all these inbred looking white kids wearing fluorescent orange and green t-shirts that said “God Hates Fags” and that had the Star of David with ginormous red Xs through them. They couldn’t be older than 9.

@Dodgerblue: Asshats test the limit of my First Amendment love. Frankly, I think they dance on the other side of the line, and I draw it pretty far to the offensive obnoxious side. It’s bad enough when these freaks go places, but to drag along these kids and poison their minds, I should have called Child Protective Services.

@SanFranLefty: Nice to know re DC. It is an awe inspiring place to be. Fave monument is Lincoln: but it was only when I got up there where he is and looked out over the city that I understood what it meant.

Now those Phelps people: I’m sure I posted this before but repetition never stops me these days; when the mayor of New Paltz started marrying same sex couples (he’s straight and cute and he will come and paint your house. I don’t know if he charges extra to take his shirt off but it would be worth it) the clan came to picket. The town sent out notices begging us all not to provoke the Phelps’s; not to shout at them; not to throw Barbra Streisand CDs at them (you see how I went straight to stereotype there); to ignore them and go about our business (I live 35 miles north of this so I only read about it). The town said they make their living suing municipalities who don’t protect them sufficiently. They are all lawyers (forgive me!) so it costs them nothing and it can cost small townships plenty. So they settle out of court to save money. And that’s what this particular Klown Kart is about: legal blackmail.

@SanFranLefty:
every municipality has leash laws ferchrisakes, there is no law against dressing little children as gestapos? i personally think one should require a license of some sort to breed in the first place, but that’s another story. you need one to fish!!!
ah lefty, sorry you had to see that. i would have bitten their faces off.

my daughter recently asked me what kind of a terrible mother was i that i never took her to DC? she doesn’t remember the 18 months she spent there as a baby, and we’ve never been back. ever. hey mell, we lived at 2121 P street. still there? then there was the plate throwing incident, and the hospitalization and such……tch tch tch such a waste of potential, like our country.
i have always been suspect of my love of the First. double edged sword, lefty. i have not made my peace with skokie.

oh, and i saw sophie and solomon (oprahs dogs) walked around rittenhouse square when she was in philly shooting beloved. i asked the doorman-walker if they were in fact sophie and solomon. why yes they are!. i immediately reported him to the concierge. idiot.