While we here in the U.S. ponder the ramifications of the Congress passing health reform legislation, most Europeans are remembering a watershed event in modern history: the fall of the Berlin Wall.

Erected in 1961 to enforce emigration restrictions, the wall turned East Berlin (and indeed, all of Eastern Europe) into a de-facto prison camp, and came to symbolize all the worst aspects of Communist totalitarianism during the Cold War. More than 100 East Germans are reported to have died trying to flee to the other side. So when the wall finally came down on November 9, 1989, it was cause for enormous celebration throughout the world. To cite just one example: shortly after, Roger Waters, founder member of the band Pink Floyd and principal composer of the Rock Opera The Wall honored his promise to stage the show one more time, and did so in an enormous show held Berlin at the site of the old wall, to great fanfare:

Perhaps less well known is that some world leaders were opposed to German reunification from the start. It was not just the hardline communist dictators whose own regimes would fall in the wake of the events of Nov. 9, 1989, but also a few Western European leaders like Margaret Thatcher. 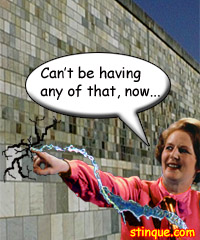 “We do not want a united Germany,” she said. “This would lead to a change to postwar borders, and we cannot allow that because such a development would undermine the stability of the whole international situation and could endanger our security.”

It is a chilling reminder of the disconnect that looms between the Conservative mindset’s rhetorical promotion of “freedom” and its sometimes knee-jerk skepticism to anything that reeks of societal change.

The events that unfolded two months later seemed to take everyone by surprise. This too is a reminder that despite the deepest wishes of those who hold and wield power, the course of History is not directly under their control, and the popular euphoria that greeted the fall reminds us that neither is the popular will.

Congratulations go out to Germany, on this the 20th anniversary of your family reunion.

Serolf Divad
12:28 pm • Monday • November 9, 2009
comment »
Choose Your Delusion
Down and Out with the Healthcare Bill Hate Addicts Shoot Up for Schoolchildren
4 Comments
Tommmcatt is hunkered down in the trenches

Which reminds me, where’s Benedick lately?

Tom Brokaw is on my teevee telling me it’s still a dangerous world out there … suitcase nukes!

@Tommmcatt is hunkered down in the trenches: Well, a united Germany has never been a good thing for Britain, historically. And if I recall, the running joke 20 years ago was that France had already surrendered.

This is also the anniversary of Kristallnacht, to which neo-Nazi pigfuckers have remembered in their own hateful way.