Stinque
Home Latest Comments Log in
If it smells, we’re on it.
Stinque
This is America.
Comic Relief, Compassionate Conservatives 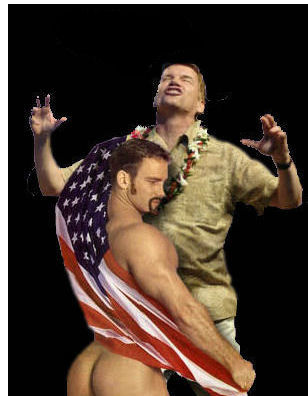 Thank you jesus for the man meat which we are about to gobble in your name, for the power of the schlong is thine glory and glofkrkegle, rgrgff!!!

GOP icon, Jesufascist fucktard and gay-bashing schlong-gobbling meth head Ted Haggard refused to take Stinque.com’s recommendation that he take up a new career as a Tiger Temper Tester for for Siegfried and Roy. Having failed at everything in his professional career except finding stupid people to give him money in trade for salvation, Haggard is returning to the revivalist racket, putting together a ‘church’ in his basement.

Ha. Haha. Hahahahaha. Who are we kidding? Wanton scum like Haggard are the heart and soul of America. Stone-cold narcissists of unimaginable greed and hypocrisy whose lunatic swagger will suck in the legions of fucktards ready to believe a lie wrapped in Jesus. 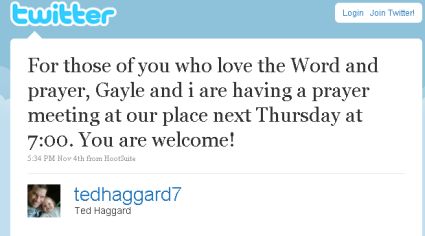 The whole twisted resurrection scenario is playing out on Haggard’s Twitter account. Usually, it is a mix of teenage-girl philosophizing, self-promotion and random quotations on a godish theme. Then, perhaps inevitably, on Nov. 4, Meth Head Ted posted, “For those of you who love the Word and prayer, Gayle and [sic] i are having a prayer meeting at our place next Thursday at 7:00. You are welcome!”

Can anyone imagine anyone stupid enough to take up this offer and give Meth Head Ted a chance at building another mega scam to fuel his raging hunger for drugs and gay sex? Meth Head Ted and his wife Gayle can. After all they pulled this off once with the crew they built at the New Life Church (aka Church of the Perpetual Schlong Gobbler).  In fact, Meth Head Ted was so successful, he became one of George W. Bush’s Jesufascist elite who participated in regular conference calls to the White House to shout halleluahs and advocate the internment of homosexuals, and the deportation of catholics and non-whites. 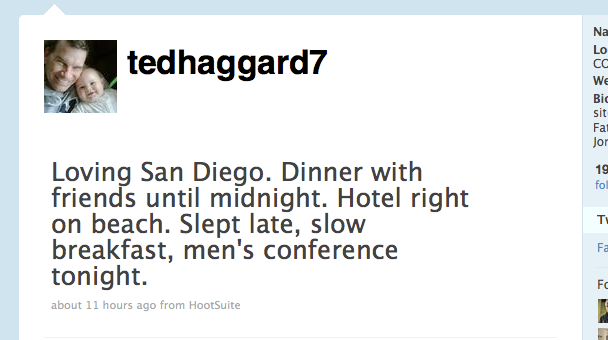 Key to managing the development of the new church of the Perpetual Schlong Gobbler is to manage perceptions at the outset. Instead of having Haggard’s wanton carnal appetites splashed across the headlines, the diabolical revivalist preacher is using Twitter to acclimate his congregants to his freewheeling gay lifestyle and training them to understand the codespeak he has to use to cloak it.

Question for the Stinquers: what does ‘slow breakfast’ mean?

Don’t know what a “slow breakfast” is, but if it’s anything like a hot lunch, I don’t WANNA know.

You mock him, yet no one ever donated money to me so I could indulge in drugs and sex. He has obviously figured out something about people that I haven’t.

@al2o3cr: Somewhat off topic: my Mom, may she rest in peace, was a big baseball fan, and when Jesus Alou (Hay-sus) played outfield for the S.F. Giants, she would always say “Hey, will Jeeesus get a hit?” when he came up to bat, and then laugh herself silly.

@lentinus: I dunno. Possibly. The “Loving San Diego” part may be about doing it with a guy named Diego, too. I mean, guy speaks in scripture, any interpretation is possible.

We have to forgive these people. If we don’t we become like them.

@Benedick in mourning:
I’ll admit that I’m probably the worst at the whole forgiveness thing, but forgiveness can only be offered if he accepts who he is and who others are.

@Benedick in mourning: It’d be like forgiving a rabid wolf. It will eat your face in insensate fury no matter what the fuck you do. Haggard should do the right thing and blow his own brains out on pay-per-view, proceeds to go to his family and victims.

He has always seemed to me more to be pitied than despised. You have to understand that this man was not just a cultist, he was the High Priest of a cult, on of its higest. The conflict in him and the pressure on him must have been incredible, and yet, outside of a sort of pro forma condemnation of Homosexuality, you never really heard the vicious hatred of a Pat Robertson coming from him. I have to say that is to his credit, for most people in his situation become vicious homophobes, externalizing the hatred they feel for themselves.

He’ll never be quite right, as the cult whose approval he still so desires will never accept him or allow him self-acceptance, but as fucked-up as this may sound, he is ok in my book. I am free to believe what I believe, he is free to believe what he believes. In the end, what he ended up doing was provide the Gay community with a kind of negative example, a living, breathing reminder of what can happen if you stifle your most intrinsic and natural impulses. He paid dearly for it.

You never go quite far enough with these things, you shrinking violet.

You should have said “Haggard should do the right thing and blow his own brains out on pay-per-view while naked and smeared with his own feces, drinking goat urine all the while, until per-minute call-in pledges run out and it is time for the bullet. Proceeds to go to his family and victims”.