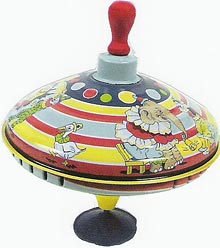 RedState’s Erick Erickson spins like a top: “This is a huge win for conservatives.”

I have said all along that the goal of activists must be to defeat Scozzafava. Doug Hoffman winning would just be gravy. A Hoffman win is not in the cards, but we did exactly what we set out to do — crush the establishment backed GOP candidate.

Oh, and for good measure:

Were we to combine Scozzafava and Hoffman’s votes, Hoffman would have won.

And there’s the tell: You didn’t combine the votes. You split them. You can’t crush a candidate and then declare her votes your own — especially since Scozzafava herself tossed them to the Demrat winner. Besides, if she’s the radical leftist Michelle Malkin makes her out to be, the only votes remaining for her were those of unreconstructed upstate Marxists.

But if that’s the lesson you want to draw from Tuesday night, that’s perfectly fine by us. Go ahead, show the Republican establishment who’s in charge. Take down all their toadying candidates. Let the Demrats win. We’re with you all the way.

Oh, and that poll showing that Sarah Palin has an unfavorable rating in the very district she tried to colonize? Never mind that. You know better.

Thanks to your strategikul and taktiquil bwillyance, you and your Teabaggers just cost the GOP a district they owned since the War of Northern Aggres… um, the Civil War.

Surely this is the most significant thing that happened last night. Corzine’s loss mights affect more people and cause more damage but no Democrat has won in NY23 since… oh well, good lord, you all know that. But srsly. Isn’t this the big news (I except ME. I can’t deal with that)?

Um, okay. No bias there.

@Capt Howdy:
Not as bad as Politico, but still pretty shitty.

I went to look at the Erickson piece and read some of the comments – so thank you, noje for that – and I am beginning to be reminded of the DFHs who brought down the Democratic party at the 68 convention. I well remember all those middle-class white kids begging on the streets of NYC with signs informing us proudly that they’d just come back from Chicago. Now I know there was the war, the draft, etc – the biggest difference now is the absence of a draft and the all ‘volunteer’ army – but by giving the election to Nixon they guaranteed that the war would last much longer. But that didn’t matter so much as bringing down the party. The other big difference of course is that buried among the DFHs were a few you might conceivably want to fuck which isn’t the case with tea-buggers but still. Am I wrong to think this way?

@Benedick:
No. They are the living joke of “The peasants are revolting.”

Yeah, it’s been really weird that the AP has been pushing this whole “every race is a referendum on the Obama presidency meme.”

Anyone who actually thinks that must be totally ignorant of local politics and possibly retarded.

@ManchuCandidate:
or has I have called them for a while, Republico

TJ/ Any Star Wars and/or comic book nerds out there? I’m getting rid of this stuff TODAY so help me God.

write to me at romegirl at stinque and lemme know.

@RomeGirl:
I wonder if it would help me sell my disney crap if I said it belonged to my shitty ex boyfriend?
I have been thinking of having a sale. I have lots o crap.

@Original Andrew: I have been amused by how breathlessly they have been pushing this meme, and yet I had to really dig to find any mention of the NY-23 race. Which, if you think about it, was obviously an election with national implications as it was for Congress…oh, nevermind. I should stop thinking. Referendum on Obama. Woot! Woot!

Why is that, I wonder? It’s very “nothing-to-see-here-move-along”, isn’t it?

@Tommmcatt is hunkered down in the trenches: It doesn’t fit with their pre-packaged coverage. I’ve seen headlines about the results in Maine, but nothing on WA. I don’t know if it’s bias or just pandering for ratings + laziness.

Run off with me to Paris, Cyn.

@homofascist: @Tommmcatt is hunkered down in the trenches: that plus a “those nutty people on the Left Coast” type of deal, and a lot of the big news people at nat’l levels live in Virginia & New Jersey — so to them, that is THE BIG THING because it’s literally their backyard.

@Mistress Cynica: Regional laziness. East Coast media would have to stay up late to pay attention to Washington state, even though twice as many votes were cast there.

@nojo: The Times is still not reporting it. They still have an old report from before the votes were counted. There is however a front-page piece on the ‘crushing’ defeat in ME.

The state by state approach is all hoo-hah. And I reckon, as the only person here actually in a same-sex marriage, to have a bit of experience on the matter. Exciting, but meaningless. Your state legalizes marriage: you have no rights. Only federal laws count.

Aaaaand, Carly Fiorina makes her challenge to Barbara Boxer official. I look forward to seeing Talibunny campaigning for her in the O.C. and San Diego County.

@Mistress Cynica: The reason there are no results for WA yet is because there are no results. Ballots had to be postmarked by last night, which means they won’t even have all the ballots until later this week, and won’t have a tally until next week, most likely. The buzz seems to be that R71 is passing (the “pro-gay” result), but we simply won’t know for sure until later.

The federal laws are important of course, but the state laws are huge and have more impact on day-to-day life: next-of-kinship, hospital visitation, inheriting your partner’s estate without a will, etc.

The most recent round in Washington for domestic partnership brings us 100% equivalency with marriage, things like the right to use sick time to care for your partner and making joint adoptions easier. Let’s not under-rate it. The scary thing is that’s it’s going to be approved 51% to 49%–technically it’s still too close to call–and could have very easily gone the other way.

Nojo, you have the very best links of anyone, anywhere, ever in the history of the universe. I just spent a whole lunch break at People of WalMart, laughing my ass off. I am going to go to my local WalMart tonight.

@SanFranLefty: I wish I was back in CA right now. I’d love to cover the insanity of Meg Whitman and Carly Fiorina running for statewide office.

@Original Andrew: I just want you to know how terrified I was for you and Mr OA and how relieved I am that it seems you get to keep your family. As someone about to get married primarily for the legal benefits (because emotionally it makes no difference to me–I feel just as committed either way), I cannot imagine what it would be like to be told that A) other people got to vote on whether I could marry and B) if a bunch of ignorant people who don’t know me or know anything about my relationship say no, I can’t have those legal rights and privileges said ignoramuses (ignorami?) enjoy. This is So. Fucking. Wrong.

@Tommmcatt is hunkered down in the trenches: I’m there. I’ll have to bring Mr Cyn, but he’ll spend most of his time in the wine country, leaving us free to shop and sit in cafés.

@Pedonator: Speaking of road shows… Westboro Baptist Church is planning to picket at Sidwell Friends Middle School (aka Malia Obama’s school) on Monday. The Secret Service is going to have a field day with that one.

Haven’t looked up the link, but some prankster in California has filed a ballot measure to do just that.

@mellbell: What are they picketing — education?

@Tommmcatt is hunkered down in the trenches & @Mistress Cynica:

@Pedonator: Probably because Malia’s daddy hasn’t rounded up the gheyz in concentration camps yet. They picket soldiers’ funerals with signs about how the soldier was killed in Iraq or Afghanistan because we tolerate gays in the US of A.

@SanFranLefty:
you know
I think we should be contributing money to these assholes. they have done more for the cause of gay rights than anyone I can think of.

oh
and the first amendment. no one has done more to assure the right to say anything, no matter how vile or offensive. if you dont know about these people/cult you should read about them. they are a family of lawyers. they know exactly, legally, what they can get away with.

@nojo: Prankster? That’s our best shot. To call their bluff.

Forgive me. All of you. You must love me. I’m about to go off the deep end. Just know that I love all of you. Some of you in inappropriate ways (noje: call me) But if we are going to do this then let’s do it.

As before noted: homosexual men are not teenage girls. I refuse to be ghettoized. I wonder why it’s necessary to neuter us?

And darling Cyn: Mr goes to wine country while you shop with fags? You might wonder why fags are so obsessed with fashion. You might consider the idea that designers like Valentino helped women to internalize the corset; ie. the control of their bodies, most particularly hips and breast, those parts that represent fecundity that most unnerve men; etc. So the eunuch (Valentino) adorns the trophies of the Prince (bankers?) to demonstrate his phallic power. That is what fashion is.

See, jnov? I go crackers and can’t stop typing but it doesn’t mean that I don’t value you all.

Chez Woodstock we’re preparing for death: either his or mine. Doesn’t much matter. He is my life.

Every time these votes come up is a dagger in my heart. Now? I don’t want marriage. I want nothing to do with this nonsense. I’ve lived outside society all my life so let me finish as I began. If he dies first, which is likely, I might move to Iceland. Or LA.

And despite my ACLU allegiance, I sent an email to the PA attorney who won a $2M judgment against WBC — I congratulated him, he thanked me. Yes, I’m conflicted.

@Benedick in mourning: I love you.

Being a minority sucks.