Stinque
Home Latest Comments Log in
If it smells, we’re on it.
Stinque
This is America.
Weekend Sedition 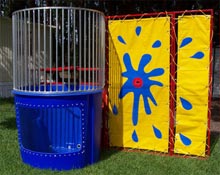 When last we left our story, Orly Taitz was ordered to show cause by Friday why she shouldn’t be slapped with a $10,000 fine for insufficiently entertaining Judge Clay Land with her antics.

Her solution? Demand that Judge Land remove himself from the case. Because the Bush-appointed judge is obviously in bed with Barack Obama:

There is some circumstantial evidence that Judge Clay D. Land may have had extrajudicial and ex-parte contacts with the Obama administration, in particular from Attorney General Eric Holder.

Orly refers us to “Exhibit A: Affidavit Regarding Eric Holder’s Visit To Columbus, Georgia.” Which is all there is to Exhibit A — just that title. Oh, she’s good.

Not good enough? Well, how about this:

A preliminary review of the results of the Honorable Judge Clay D. Land’s public disclosures concerning his investments, it also appears to the undersigned that Judge Land may be disqualified because he has equity ownership of certain securities (e.g. Microsoft and Comcast) which are aligned both politically and economically with a key Defendant in this case, namely the de facto President of the United States, Barack Hussein Obama, in such a direct and personal way that it could be said that this Judge has a financial stake in the outcome of the former Plaintiff Captain Connie Rhodes’ original case-in-chief.

We weren’t aware that Microsoft and Comcast were big Obama fans — but then, we also weren’t aware that TLC fired Jon Gosselin this week. And while Judge Land does own stock in both, his reported 2007 income from them was less than $1,000 — equal to a rental property he owns in Columbus. We hope he didn’t blow his profits on an Xbox.

There’s 22 more pages to Orly’s missive, but that’s all we can handle in one sitting. And we don’t even get the pleasure of fining her for dragging us through it.

Oh, nojo. It gets better. She wants a trial on whether she should be fined.

“This filing CONTEMPTUOUSLY ignores the Court’s previous admonition that Plaintiff’s counsel discontinue her illegitimate use of the federal judiciary to further her political agenda.” (all caps and bold italic highlighting added for emphasis). [Like a right-wing nutjob ever needs a reason to break out the ALL CAPS. –Ed.] If the words “penalty” and “contemptuously” be taken at face value, then indeed, the undersigned counsel is entitled to certain protections, including a trial-by-jury.

Wow. But there may be a more rational explanation. She’s stoned.

This is clearly one of the situations in which the line demarcating “law” and “politics” is extremely unclear. “Politics” is, after all, the process by which “beliefs” become law. The original Plaintiff in this case, Captain Connie Rhodes retained the undersigned counsel for the purpose of advocating her “belief” that the words of the United States Constitution mean something more than dust in the wind, especially in light of her commissioned officer’s oath to uphold the Constitution, regarding which highly meaningful and significant oath this Court has never written a single word.

@chicago bureau: Her writing style isn’t bad for a wacko. Did she go to Yale?

Dodgerblue: No. But it does have a certain flavor — like a freshman essay on constituional law. A freshman in high school, I mean.

@chicago bureau: My Senior Comp teacher in high school, the ball-busting Mrs. Barbarini, taught me how to write. She had high standards and was willing to rip your work in front of your classmates. We were terrified of her.

So, Legal Beagles, what happens next? Does she appeal the inevitable fine? Does she have grounds for it being excessive? How much longer can she string this out? And how many more conspiracy theories can she stuff into it?

@nojo: I’ve seen litigants like her – they keep talking and talking – “my child support isn’t fair” or “but he wrecked my car”. They don’t get it that, once the gavel comes down, the show is over. Orly will spend a month or so in jail – the first Birther martyr.

@blogenfreude: Better, they just letter her wander the hallways of Federal justice buildings in California forover, pounding on clerks’ counters, sobbing and shrieking, ‘Neegro eez not president! Neegro eez usurper of great power USA and musleem fazcist! You muzt leezin!” like some twisted psychopath lost in her own hatred and fear, right out of a Rod Serling classic.

@nojo: Throwing the word “contemptuously” into a pleading sets her up for an easy contempt of court. I’m with Bloggie – she’s trying to set herself up to be the Joan of Arc of the Birther Teabaggers. Either that or the judge will have her civilly committed to the Georgia loony bin.

The law.stinque.com CSB complaint continues to write itself.

@SanFranLefty: You and the attorneys here have to write that puppy and get it posted. I know Mike at CandL will pick it up and make you famouser.

@FlyingChainSaw: Yeah, except DB and SFL can’t sign it with our Stinque monikers. I don’t want to attract the wrath of the teabaggers IRL. They scare me.

@SanFranLefty: she’s trying to set herself up to be the Joan of Arc of the Birther Teabaggers

I think she really is that unhinged — she’s positing a conspiracy theory around Land that matches the conspiracy around the birth certificate. If you oppose her, you’re one of them.

Yes, the result will be a useful martyrdom. But that’s not the intent.