Stinque
Home Latest Comments Log in
If it smells, we’re on it.
Stinque
Assholes, they do vex us.
Today In Suck

One Can Go Too Far 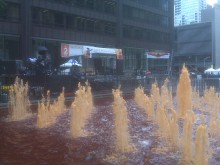 So Daley Plaza cleared out fairly quickly after the first-round TKO of the Chicago 2016 bid — all that remained after a couple of hours were roadies, and a fountain filled with orange soda.

And the people who left in a hush had a serious case of sad.  They believed in the bid — truly and completely, and notwithstanding all of the inherent problems of handing off billions of dollars to the Daley machine, when such money can pay for other useful things.  (On this score, the objections to the bid by Chicagocentric Stinquers were well-documented and, on the whole, well-founded.)

But: Rush Limbaugh?  Glenn Beck?  Weekly Standard hacks?   And, also, a guy who dialed into WGN Radio after Chicago got spiked and blamed Black Eagle for badmouthing America overseas — just after he gave America a big, wet, sloppy kiss?  All of whom were elated not so much that Chicago lost, but that America lost?

Look: I didn’t want the Games to come here.  My reasons were out of broader concerns about the well-being of the city I live in.  These guys just wanted Barack Obama to be embarassed.  That’s all they care about.  And this — something that is positively trivial compared to health care, or Afghanistan, or all the other things Barry couldn’t think about while he was in Denmark for four hours — proves where these people are, mentally, beyond any doubt.

Note to Harry Reid and similarly spineless Democrats in charge of things: the guys whose asses you want to kiss are in league with people who were cheering when America lost at something.  These are the bastards you are dealing with.  A thought: why don’t you call ’em out on something like this?  For once?  And not wishy-washy, but in earnest?  For me?  PLEASE??

I hate that the UN is here in NYC – we have convoys of unimportant potentates screaming around town in used Suburbans. We have the preznit for important events (and yes, Democrats fuck up traffic as much as Republicans). We did not get the 2012 games, and we better for it. We have movie stars, and rap stars, and silly reality TV stars who get cops to block the sidewalk. We get movie crews who think they can ask me not to enter my apartment for 5 minutes because they need the street for a shot. Meh – I have walked through (and ruined) more than a few shots that kept me from living my life.

Time may be showing that the Town Halls backfired. Time will likely more quickly show that this has too — you have to be deep in the well to celebrate America losing the Olympics.

That, or just rational. But I’m not hearing celebrations that Chicago dodged a multibillion-dollar bullet.

@nojo: Its a pattern, and if the backlash doesn’t come over this one, it will come the next time they celebrate a setback for America just because its a setback for Obama. The insanity grows daily, and they will push it so far that it becomes impossible for the great mass of people not to see it as insane hate.

@nojo: Corzine was dead a month ago, now its a dead heat, and I don’t think its particularly associated with people deciding they like Corzine, I think the Republican Party is tarnishing its name so badly, that its having an impact on a deep, slow, level.

@Promnight: Or is Christie’s corruption finally bubbling to the surface?

@SanFranLefty: That has played a major role, but more than that, is that Christy is an empty suit, he cannot answer a policy question to save his life. A great big, enormous empty suit, I should say. The first debate was Thursday night, and one of the biggest, and most conservative, newspapers in the state said in its editorial the next day that Christy seems to be all hat, no cattle.

I am expecting that the Corzine ads that go into detail about his brother’s non-prosecution, how he bought the office of USA, how he handed out these monitoring contracts, and his leaking of a totally bogus investigation of a democratic senate candidate a month before the election, will go into heavy rotation. Corzine has money, people downplay that. Christy is a fat fuck and I hate him as much as any shitheel asshole alive, he is a fucking bully who always and constantly used his office as USA for political purposes, and continues to use his influence with his allies still in the USA office, for purely political purposes. There is a special place in hell for corrupt prosecutors, they have way too much unsupervised power in our federal court system, and when you get a partisan hack in power as a US Attorney, they wield so much power to wreck people’s lives, its a fucking damn crying shame, it is.

@SanFranLefty: TPM’s all over the Corzine-Christie race, but I just can’t find my way into it. Is there some broader message I’m missing?

@nojo: Well, its a Rove acolyte US Attorney who spent 8 years pursuing politically motivated prosecutions of democratic politicians, per Rove’s orders, and openly campaigning for governor while US Attorney the whole time. Oh, and also engaging in dangerous, nasty practices, like going after big companies on corrution charges, getting them to agree to plead in exchange for him, Christie, appointing an auditor to monitor them for several years, with the auditors fees being paid by the company. The auditors, all cronies and republicans, one of them Ashcroft himself, got tens of millions from this nice little shakedown racket.

The ugly thing is these are pre-indictment pleas, meaning there is no court supervision, just to look at things and make sure its all on the up and up. Its not on the up and up, its a shakedown racket and then the spoils are spread, with again no bidding, no judicial supervision, to cronies.

But his corruption meme got traction, and he was supposed to trounce Corzine on the strength of the Rove-engineered, “dems are corrupt” thingy.

And lo and behold, when he has to actually campaign and have issue positions beyond “they’re corrupt, lower taxes,” he is an enormous, but empty, suit, and his ethics are stinky, too, and its lookingg like Corzine could eke out a win against the fat fuck.

There is nothing more evil than a corrupt prosecutor, nothing.